This was clearly a review being put up, regardless of how many Doctor Who reviews there are in the World of Reviews. But to ease the humdrum of yet another person gushing over the 50th Anniversary Special (because clearly I am in the process of doing that), I decided to add a bit of what I did the week I got caught up in the Whovian madness.

First of all, the amount of freakouts on the leadup to the 50th anniversary special go leaps and bounds the usual norm of freakouts I have over this fabulous TV show. But I can’t say that it could be constricted to just “The Day of the Doctor,” and it really started with the kicker ending to the series, “The Name of the Doctor”:

Since then I’m pretty sure every Whovian had been contemplating what this would mean to the very order of Doctors there have already been. Was John Hurt going to be an official Doctor? A stand-in? The next regeneration? Or some hidden one we had no idea about? Whispers flew through the interwebs, theories and analyses and a myriad marketing ploys later, we’ve got mini-episodes and sub-specials leading up to one of the episodes everyone had been waiting for (the next one is coming up during Christmas, so I hear…):

The Day of the Doctor. Aptly titled, because it is his day, and Moffat had done well enough to remember that by paying homage to all of the Doctors and the work that had been put to keep this show alive. I didn’t start watching the show until Eccleston’s 9 (or is it 10 now?), but I do have a deep-seated respect to the older version, and I can’t say I’ve ignored the Easter eggs that were thrown into the special relating to the older episodes.

There were a lot of things I did love about the special. One of them was Gallifrey, whether it was the scenes of destruction, the overhead shots, and the 3D stop-motion graphics of the Doctors standing there watching their world burn. I loved the tie-ins of past Doctor Who episodes, from Bad Wolf to Queen Lizzie, to that point in time where the Time Lords had been kept at a lock, just out of reach, but so very there.

I loved that the special was almost purely a character analysis of the most mysterious man in the universe: the Doctor himself. I say almost because obviously there was action that moved the plot along, though thankfully the focus remained on the character interaction between three very different regenerations. John Hurt, David Tennant, and Matt Smith played off so well with each other, and the Tennant/Smith duo were so uncannily in sync it was scary. Tennant also reminded me why he’s still by far my favorite of those I’ve seen, and for once, I actually liked Clara (and I loved Rose…or, well, the Moment’s conscience interface…).

I could also go on and on about the snazzy dialog as well, and if I could quote you my favorite parts, I would. Unfortunately, when I started transcribing my favorite quotes right after a repeat viewing of the special, I realized I had way too many I liked and this post would get even longer than it already is. But I think we get the gist.

I did freak out again at this point, though:

The entire scene at the end was just mind-numbingly phenomenal. To me, at least. I love it when they bring the old Doctor faces back in the screen, and it was a pleasant surprise to see it happen. I admit I squeed when I heard and then saw Eccleston’s cameo…and the squeeing continued further to outright flailing when they said “Thirteen!”.

So yes. I loved the special, was not disappointed (though I did slightly object to the casting of Queen Elizabeth I…I just didn’t believe it). I also want to say I loved the Mark Gatiss special as well, “An Adventure in Space and Time,” which stars David Bradley as William Hartnell. That brought a wee bit of feels, not gonna lie. And the Paul McGann mini-episode, as well as the Five(ish) Doctors mini were great.

And now back to my TARDIS, because I’m going to go watch a couple of my favorite episodes while I await the Christmas special and the sad, SAD regeneration of Smith to Capaldi. But that’s okay. I can think of the comfort I have with my cookies. 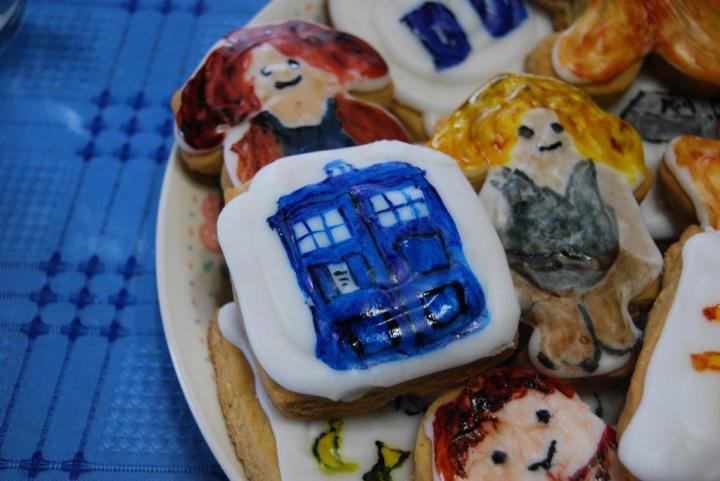 3 thoughts on “Food and Fandom: Doctor Who”