Because clearly I’m not already a big enough Doctor Who fan, what with the cookies and my poster and my mini-TARDIS and my adipose plushie nicknamed Allons-y (full name being Caius Alonso Napoleon)…

In my defense, the knitted project was for a friend’s belated birthday present. And now that he’s actually got the project, the need for secrecy is over, and I can totally post it up. Yep.

So I may have gotten addicted to browsing Ravelry every so often for knitting project patterns. And when I started looking around for ideas on an iPad cosy, guess what lovely little morsel fell beneath my ever-active fingertips? Yes, I’m talking about a TARDIS cosy design. Which eventually led me to this fellow darner’s pattern. Couple that with the beautiful royal blue yarn I recently got at A.C. Moore, and an abundance of white and black, I set about in my crafty-ish ways and started knitting–while watching hours of movies and TV shows, of course. The Multitask Monster rears its oh-so-beautiful head. 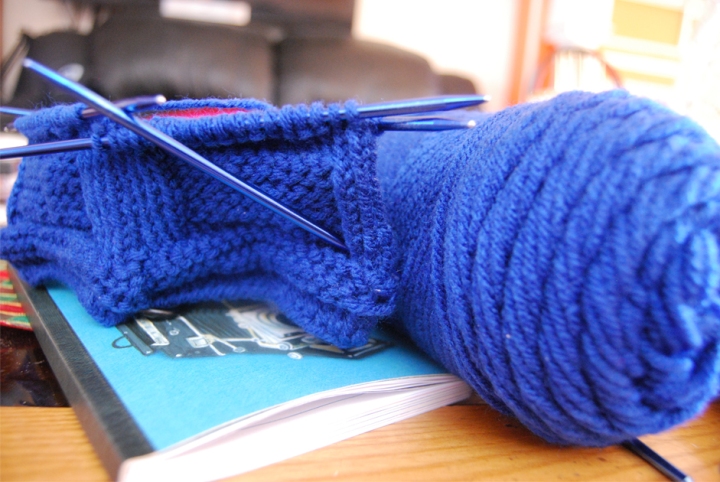 So far so good, right? Eventually I got up to the white windows and I realized that I’d hit numerous snags (no, pun intended…seriously…). If I’d done the pattern exactly as it was supposed to be done, there would be a problem of how far the work can stretch. Considering I don’t exactly have an iPad, I had to use the wide side of my 7″ Kindle to test out the fit. Eventually I decided to carry on, but that I would have to go back and fix the fit if it came to that.

And then the top came along. Again, I hit another problem. 32 stitches across of black, and then some blue on the sides? Yeah, no, I decided to just knit black across to save the trouble of having to cut the black strands and weave them into the knitting. There was also the upcoming problem of the bind-off at the top, and whether I should keep it open or keep it closed.

In the end, I made the executive decision to close the top, because that way, the light would not droop on the outside, and the bottom opening would allow the iPad to slide in easily.

I also did go back to the original problem, which was the white strands inside that prevented the stretching, and after some wild postulating, I eventually went with the tedious method of cutting them and weaving them in. Really tightly. Yep. Saves me trying to find lining to line the inside.

As for the embroidery, I ultimately decided against it. Well, it might be the fact that I didn’t have any embroidery materials around. Or maybe I got really lazy and at that point I didn’t want to knit the TARDIS anymore. Or I didn’t get the chance to go to the crafts store for pre-embroidered lettering and thensome. Whatever.

Some mistakes, obviously, some displays of sheer laziness, and a complete meandering from the original pattern. But that just means that my TARDIS has character. And that is probably better.

One thought on “TARDIS: Bigger on the Inside”