Oh Ankh-Morpork and your metropolitan ways…

I discovered Terry Pratchett’s Discworld series some few years ago, when I was trying to add more books to my already-filled list. That said, I not so much “discovered” Terry Pratchett as was “fervently urged” to read it, since, you know, apparently his stories were dreadfully comical and awesome. Thankfully, my first Pratchett book was The Truth, and, since I had worked previously in a journalistic environment, I was right glad it was my first Pratchett-experience.

Several Discworld novels later (as well as a read of the Gaiman-Pratchett collaboration, Good Omens), I’m still occasionally reading Pratchett, and the most recent ones definitely involve that of the scoundrel Moist Von Lipwig.

Change has hit Ankh-Morpork with the coming of a steam engine that would revolutionize travel throughout the continent. The Patrician–a wise and almost omniscient tyrant–has decided that if there was anyone who would be able to maintain this “steam train” phenomenon, it would be Moist Von Lipwig, a man Lord Vetinari has had previous threatening deals with. Moist, a man who values his life, rises to the challenge, and in conjunction with characters like Dick Simnel (the engineer responsible for the train), and Harry King (the King of the Shit and burgeoning entrepreneur), Moist must push the boundaries of the railway, with a goal as far as Uberwald.

Of course, what is an Ankh-Morpork story without its multitude of problems? Along with the steam train revolution, there is also a civil war brewing amongst the dwarves, and to make matters worse, grags–dwarf rebels–are burning down clacks towers and attacking non-dwarfish characters. And what happens when goblins and trolls become a major part of the train-running business? Raising Steam (#40 of the Discworld novels) answers these questions, and puts forth even more to think about.

But that’s Terry Pratchett for you.

It’s actually been a while since I’ve returned to Ankh-Morpork, so reading up on the latest happenings within the city was tremendously welcome on my part. I loved that the entire book involved many of the Ankh-Morpork factions, especially when it meant reading about some of my favorite characters, like William de Worde and Sacharissa Cripslock, Vetinari, Sam Vimes and the Night’s Watch, the wizards of Unseen University, a mention of CMOT Dibbler (who will always remain my favorite businessman), etc. The list really does go on. I loved that Moist Von Lipwig remains forever a scoundrel, but one with a heart of gold, and I loved what Pratchett concluded regarding the Low King of the Dwarves. There were definitely many things to love about the book, and if this had been the only Discworld novel I’d picked up, it would definitely have led me to wanting more.

MY SCONE OF STONE FOR A GOLEM HORSE

I did do some baking to correspond with this review, yes I did! Imagine my surprise when I found that there was actually a Discworld cookbook out in the world. Naturally, I searched for one of the recipes in the book, and found a recipe for Dwarf Bread. However, since I didn’t exactly feel like buying bread flour, nor did I want to spend time kneading bread, I opted to do something that is dwarf-ish, without having to rely on a specific Nanny Ogg recipe.

So in comes the Scone of Stone.

The Scone of Stone  is an important artifact in dwarf culture, particularly because it is the seat of the Low King. While it did not play a major role in Raising Steam, it was mentioned several times, as Low King Rhys Rhysson’s rule was put in slight jeopardy when the grags began causing trouble for dwarfs and non-dwarfs alike.

Personally, the fact that it was called a Scone of Stone was enough for me to want to try to make it. So I found a honey ginger scone recipe and went with it!

I might have run out of honey, because it wasn’t as sweet as I’d imagined. But that’s okay, nothing like making a cinnamon-sugar mixture at the top to remedy this problem! Also, since I’ve only really made drop scones before, I was a little worried about maintaining the shape of the scone. Luckily, I did have a couple cookie cutters, and went with a similar–if not identical–shape as the recipe. It did come out a little more brown than I’d like, with the consistency of a cookie rather than a scone, but hey, that’s what dwarf-bread texture apparently is. 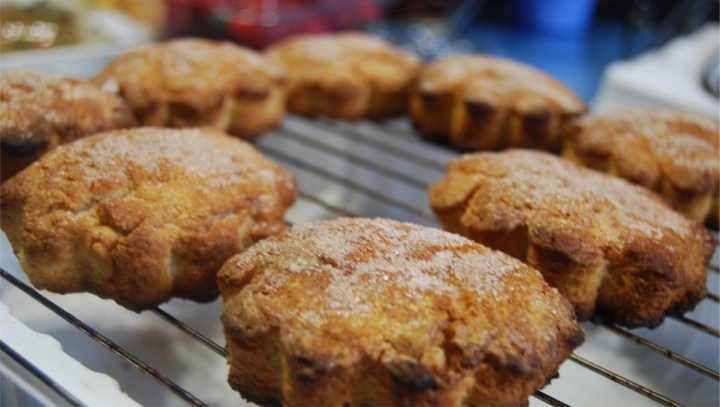 It was also delicious, so I can’t really complain too much.