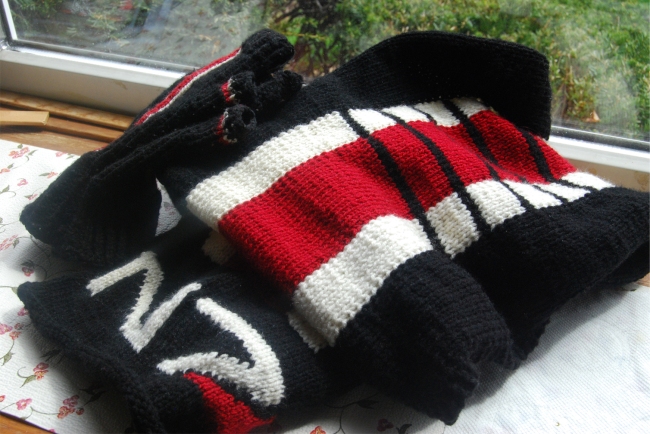 The N7 scarf had to be made, however. It called to me like the Milky Way calling for Commander Shepard to save it from the Reapers. Besides, my N7-striped gloves needed a matching scarf to go along with it, right? 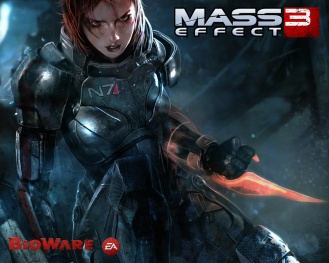 For those who haven’t already realized this, I’m a pretty big Mass Effect fan. Like, huge, HUGE ME fan. I was particularly glad that the entire trilogy was done well, and I was not at all disappointed by the end of it. This love may just be part of my over-obsessive fangirling of things fandom-y, but the ME trilogy was big for me in that it weaned me over to the scifi-world. Okay, Doctor Who and Farscape did that, too, but ME was different. It was a video game that I normally wouldn’t have considered because it wasn’t fantasy or steeped in a historical or superheroey context. It had a space military plot, with a Star Wars-y vibe, and while I respected that, it wasn’t something I was rearing to play as a priority. But, you know, I got to choose a female soldier character, so um…of course I was eventually going to play it.

Needless to say I have since changed my opinions on non-fantasy, non-historical, non-superheroey gaming. I pretty much play a lot of everything now, so yeah. Still, it did start with Mass Effect.

I found the pattern at Ravelry.com, from a classy lady who does Bioware stuff  (though I saw mostly Mass Effect knitting patterns as opposed to the other Bioware games). I did a few changes, especially since A) I didn’t want to do the other emblem half, and B) I thought the colored stripes needed a different proportion. So for the edited pattern:

MATERIALS
At least two skeins of white and black yarn, one skein of red yarn. 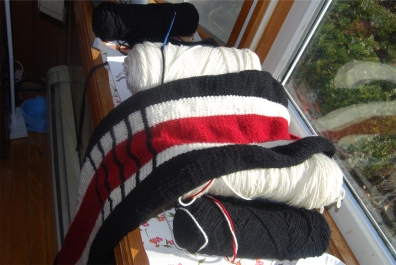 Take note: It would due well to practice dealing with several skeins of yarn on a horizontal position, because that proves to be chaotic if not organized properly. At some point I had so many yarn skeins tangled up because I kept having to twist the yarn that I must have spent just as much time disentangling them as I did knitting the pattern itself. Okay, slight exaggeration, but still… 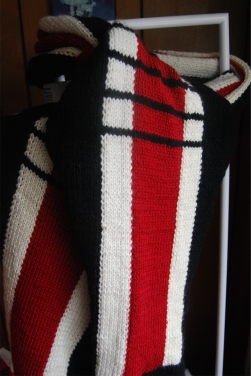 Then the suggestion is to do the N7 Stripes pattern until it’s 23″ less than your desired length, but I just eyeballed it to mean “as tall as me”. My scarf got pretty darn long, though, so I might have gone overboard with that.

Start the Articulation pattern until it matches the first side. 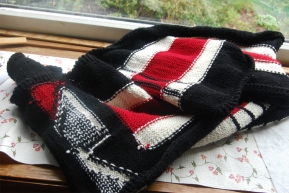 Then start the N7 logo (the pattern is on the Biowearables site). Working the color was…erm…interesting. There were some issues I faced where I had to deal with bringing the white or black yarn across the pattern, and occasionally I ended up using the intarsia technique. Suffice to say color-work was interesting at best, and took up quite a bit of time when it came to the logo itself. Thank goodness I didn’t attempt the emblem on the first side!

I think, besides my teeny tiny flubs here and there (and the fact that I accidentally cut the colored yarn too early, so I had to re-add them into the knitting), my only big problem had been the mess that was the back. I mean, at some point, once I did get the method to the madness, I managed to keep the stitches on the back of the scarf relatively neat–or at least, as neat as I could make it. But one can only go so far, I suppose. There’s also the business of needing to iron out the sides, since the border keeps curling inward, which is slightly annoying (I suppose this could have been avoided if I used the same kind of yarn throughout…but clearly I do not have the budget for that…).

Too bad it’s practically burgeoning on springtime, ’cause now I’ll have to wait until winter comes along now to be able to wear both with great relish (unless it snows in May…in which case I might actually cry).

7 thoughts on “That Mass Effect Scarf”