I should probably make some random quip about honey and Cersei or something like that, but what I realized by A Feast for Crows is that I frelling am over Cersei Lannister. No, seriously, I probably should finish the book, but every time I get to a Cersei chapter, I put the book down and head on over to another, “more kiddy” version of medieval fantasy (though considering that my version of “kiddy” medieval fantasy consists of a tentacle-machine made out of the souls of dead children, it’s not much of a downgrade). Really, it’s either read another book or gouge my eyes out from the pain and agony of having to slug through Cersei’s inner mind theatre.

I should probably have started both A Feast for Crows and A Dance with Dragons concurrently. But I actually don’t have a copy of ADwD, so I’ll have to make do with AFfC. Anyway, enough about Cersei.

Upon browsing through my A Feast of Ice and Fire recipe book, I found a recipe for Tyroshi Honeyfingers and thought: “Oooh, I want to do that!” Unfortunately, it never panned out when I realized I’d actually have to fry something. I only just managed to master frying chicken, so fried dough was going to take some time. So instead, I went to the Inn at the Crossroads website to see if they had any other honeycake-like recipes I could do instead.

Lo and behold, they actually have one for Honeycakes! Note that I did the Elizabethan Honeycake recipe instead of the modern one. On hindsight, I realize having to wait for the dough to rise probably took more time than having to fry things, but ah well. Less waste of oil this way! 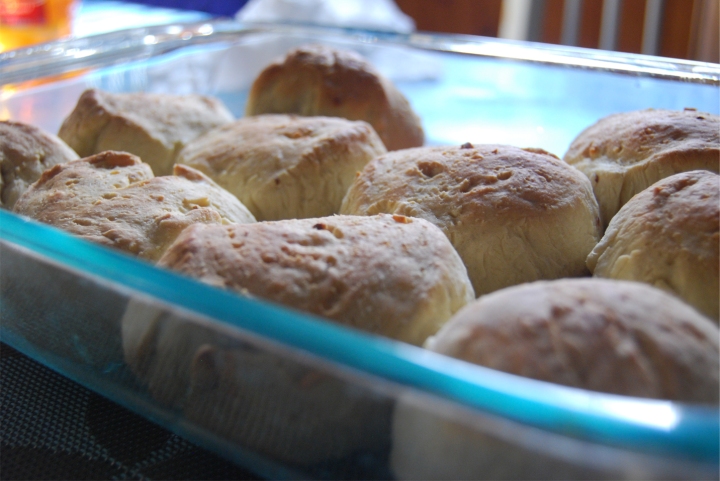 The dough: Sometimes I wish the instructions were a bit clearer, especially since this is probably the first time I’ve had to knead dough and wait for it to rise. Since I didn’t have ale or mead with me (and since my sister had outright forbidden me to experiment with the Guiness in the fridge), I did a regular water-sugar mixture to activate the yeast content (also another first). Yeast is magical, that is all I’m going to say about that. The instructions on the site might have forgotten to include the “add the honey” part somewhere in the mixture, and they neglected to say “add flour a little at a time” to the mixture. Well, okay, they did say it, but only after I put the wet mixture into the flour (in my opinion, I can’t really add flour a bit of a time when the mixture is already added to the flour at this point…). Anyway, because I didn’t have the ale, I had to use a bit more water in order to make my dough kneadable.

The honey glaze: Because putting honey into the dough mixture is clearly not enough, I did as the writers did and cut holes into the bread. Then I liberally squeezed some honey into them so by the end of the baking period, each piece of bread was soaked inside with honey, and glazed at the top with honey. Omnomnom.

Verdict: I think next time I’m using bread flour instead of the regular flour, because it wasn’t as soft as I would have liked (again, the ale might have helped in that respect, but I didn’t have any). Or maybe next time I should have used hard cider to give it an apple-and-honey taste. Mmmm…that actually sounds delicious. ANYWAY. As my mother would say, the bread tasted like “Pan De Sal with honey.” Considering how much my Filipino parents like Pan De Sal, I’m thinking that’s a compliment. I am definitely growing fond of the use of honey.