A little different from my last few 25 reads, because this one actually got lumped in together into the quartet series. For good reason, because I’d meant to re-read First Test (Book #1) and read the other three to fully complete the goal. The review is also kind of biased because anyone who’s seen my Goodreads favorites and those who’ve known me long enough know that Tamora Pierce is my favorite author EVER. I grew up with the Tortallan books, and Alanna: The First Adventure was one of two books that made me decide early on that I loved the reading and writing of fantasy (the other book was The Hero and the Crown by Robin McKinley). 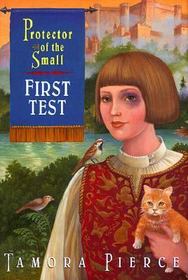 For those not familiar with Ms. Pierce, a brief overview: Tamora Pierce has written several fantasy novels about kickass females and males–but mostly about kickass females. This is a pretty big deal, especially during the ’80s, where Alanna had first been published. While the Song of the Lioness quartet will always remain my personal favorite of her Tortallan series (and she’s written more outside the realm of Tortall, which I still have to get to), there is no denying that her writing has evolved through later novels, and, subsequently, through later characters. In the case of her fantasy world of Tortall, the chronological order of writing style development went from Alanna, to Daine, and then to Kel, whose story was the only one I had yet to be familiarized with in full (while I haven’t technically read Trickster’s Queen, I don’t count that, because I’d looked up the story). 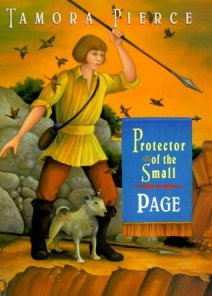 The Protector of the Small series encompasses four books: First Test, Page, Squire, and Lady Knight. The story within follows the adventures of Keladry of Mindelan, the first noble girl to undertake knighthood training without having to hide her identity in over a hundred years (but the rule prohibiting women from becoming knights have since been rebuked after it was revealed that the knighted Sir Alanna–who had posed as a boy–was in fact female). With a country still getting used to the fact that women can take arms–and are tremendously good at it–Kel has her work cut out for her. In fact, First Test involves the struggles Kel faces during a probationary first year as a page. Not only does she have to work twice as hard as men to show her training master that she can keep up, she also has to withstand the hazing and bullying that occurs throughout her year. Page continues this story of her training to squiredom, and it is in the second book where we see Kel overcome her fear of heights. 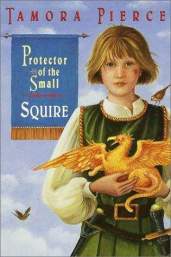 Squire and Lady Knight are where the meat of Kel’s story is for me, because now Kel is out in the world and witnessing a foreign conflict come to fruition. War is broiling between Scanra and Tortall, and while Kel is still learning the ropes, it is clear that she will play a major part within the outcome of the war. Unlike Alanna the Lioness–a usually solitary heroine (who has become a legend at this point in the Tortallan timelines)–and Daine the Wildmage–a powerful mage and demi-goddess–Keladry is a Giftless, hardworking lady knight with the knack for leadership and command. It is in Squire that we see this talent of hers grow, and it is in Lady Knight where she takes the talent and puts it to use to protect her people and defeat a sorcerer whose inhumanity and necromancy would send shivers down anyone’s spine. 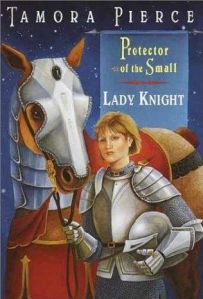 The PotS series was enjoyable, particularly the last two books, which I’d managed to read one week after the other. This is pretty impressive, considering how long it usually takes me to pick up a series and continue from the last book. (Heck, The Hunger Games trilogy took me a year to finish, and that was not because of lack of interest.) Kel is certainly a wonderful character, in that she serves as a message to girls who aspire to be more than what they are. She is real, she is hardworking, and she is endearing. She truly is a Protector of the Small, and that’s what makes her adventure fantastic in every possible way.

Shameful Confession: I did not want to read this series at first. Don’t get me wrong, it wasn’t because I thought it would be bad; from the reviews that most of my friends (and my sister, even) have said about the series, I knew it would be pretty good. But admittedly, I was still hung up on the characters from SotL and The Immortals series. I wanted to read more about Alanna and George and Numair and Daine, and it wasn’t enough that they had four books and then-some in appearance. I was a little put off that Alanna herself wouldn’t be around in First Test, though my inner logic knew that it would make no sense having two leading ladies on the page; it wouldn’t be fair to Kel if the books went back to Alanna doing heroic deeds.

So I waited, and eventually, it’s taken this project to get me to read the rest of Kel’s story. Frankly, it’s about time that I did. My only problem now is that I’ve run out of Tortallan stories to read. That is, until Numair’s story comes out in the foreseeable future…

4 thoughts on “25 Reads: Protector of the Small series by Tamora Pierce”