After months of resisting the pull to obsessively buy books, I caved because of the promise of food and fairy tales. Alone, each is a glorious entity all on its own. But combine them together and the world is your metaphorical oyster.

So I went ahead and bought Fairy Tale Feasts: A Literary Cookbook for Young Readers & Eaters. And suffice to say the first thing I did was look at the breakfast portions.

The book itself is half-recipe, half-story. Before every recipe, there’s 3-5 pages of a fairy tale retelling by children’s author Jane Yolen (who, for the life of me, I can’t remember if I’ve read or not, because I sometimes switch her stories with Vivian Vande Velde’s…). Each illustrated fairy tale is accompanied by adorable illustrations by Philippe Beha, while the recipes themselves go hand-in-hand with each fairy tale and are provided by Heidi E.Y. Stemple. There are even some interesting facts about the fairy tales and the recipes provided within the book, which is certainly educational. And, because the book itself is geared toward children, the recipes themselves are at their most basic (though I think the whole cooking part really should be done under the supervision and aid of an adult).

Because Fairy Tale Feasts is a recipe book, it was obviously going to be put to good use. So I chose to do the “Diamonds and Toads” Very French Toast. 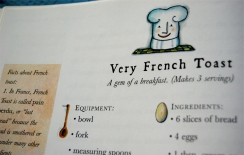 “Diamonds and Toads” is often attributed to French folklorist Charles Perrault, whose collection of fairy tales include this story about two sisters, good and bad, and their different interactions with a testing fairy. The oppressed, respectful, and “good” sister is rewarded with diamonds whenever she speaks, whilst her spoiled, disrespectful, “bad” stepsister is punished by speaking repulsive toads into existence. I actually read a very nice novel retelling of this same story by Heather Tomlinson, where the two sisters are both heroines in their own right, but I’m probably digressing at this point.

I’ve altered the recipe by cutting the servings in half, because I was making myself breakfast, and I doubted I was going to even get past the first slice of bread.

I found days-old dark bread in the fridge and figured I could use it since no one seemed to want the stuff. That said, any day-old bread works, or even a loaf of white bread newly bought from the store (which I used the second time I made French toast).

The directions are simple enough: Put all ingredients together, whisk it up a bit, and then dip the pieces of bread so that each side is coated with the egg-mixture. On a griddle (medium heat), melt a bit of butter to coat the bottom of the pan (or olive oil), then put the bread in and cook until it’s golden brown. Flip the bread on one side and do the same to the other.

And seriously, you can do whatever else you want with the French toast. For me, I took a few extra steps and stylized mine. I found strawberries in the fridge as well, so I sliced some up and topped my French toast with that as well as powdered sugar. I didn’t have any syrup handy (to this day, my sister and I have no idea what happened to our raspberry syrup), but I did have some honey, and I did have jam. I opted on raspberry jam, but I did keep the honey out just in case.

Verdict: Lordy, the stuff was delicious. My siblings gobbled it up the second time around when I used a loaf of white bread, and not even my sister whined that I’d used a liberal amount of cinnamon and nutmeg in the recipe! Definitely a keeper, as far as recipes go. Maybe if I have extra cream, I’ll use that next time.

5 thoughts on “Food and Fairy Tales”