I just wanted to take a moment to say: Look at this fabulous steampunk anthology! There’s a giveaway for it, too! I should probably warn you all that it’s a kissing book. And maybe there are bad romances in there. And the stories have clockwork and kisses and kisses by clockwork (hee). There is definitely some steam in this punk, and I’m not just saying this because I have a short story in there somewhere! 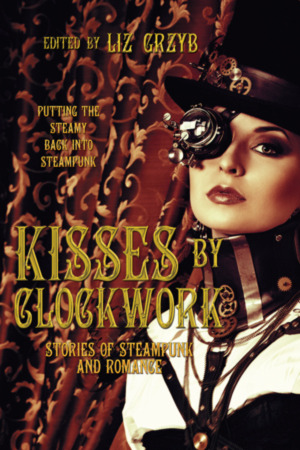 Okay, so maybe part of it is because I have a short story in there somewhere. But what kind of proud mama would I be if I didn’t tote this fact around happily?

Seriously, though, Ticonderoga Publications has awesome stuff, and editor Liz Grzyb’s published quite a number of gems in this Australian press. The Kisses by Clockwork anthology lists 16 steampunk stories of romance by various authors–some of which have been previously published in the Ticonderoga line before. I’ve already mentioned the breakdown in a previous post, and there’s a list on the Goodreads page of who the contributors are.

So for this post, I’m just going to attempt (read: attempt) to entice you with an excerpt from my story, “Smuggler’s Deal.” It’s not exactly the beginning of the tale, but I thought I’d introduce y’all to my smuggler and his wayward tactics at losing the girl and getting her back. Literally.

The Marchioness hovered in the sky.

She had just emerged the decisive victor of a dangerous game. The minute the new cannons had been set in play, there had been no hope for the Emese. Still, the time between the fall and the extractions had been limited, and it took more than two trips to retrieve the crew from Aurora Gaigna’s ship. The Marchioness was known for its skilled wingmen, but even so, her captain had expected a more efficient rescue.

Frederick Newgate remained still, his eyes taking stock of the captured Emese skailors. One by one, the last of his men arrived on deck, securing the last of their involuntary passengers. There were surprised yelps, a couple of fisticuffs, several whimpers of untold injuries.

His eyes narrowed. “She’s not aboard,” Fred said.

“No, Cap.” His first mate, Darcy, was struggling to hold onto a rambunctious, curvy female who was screaming bloody murder at him. Darcy grimaced, though he gave no other indication of discomfort towards his captive. “We got everyone but. The navigator was hardest to get at, but Hoshe’s got more nerve and skill than a Pernatan clock-maker. He went in after her right quick.”

Fred looked away, biting down his frustration. “Send another set of wingmen down. Find her, Darcy. Without Aurora Gaigna…”

“Due respect, Cap,” Darcy grunted, finally managing to subdue the woman, who seemed to understand the gravity of the situation, “sending any of us now would be suicide. It’s too far down, and there’s no saying what’s below us. The Old World–”

“Is the least of our worries. We can’t leave her in the Old World for the things below to get at her.”

“Cap, you’ve been watching the ship,” Darcy said, “It’s gone now. No turning back. Besides, without their captain, they’re no good, right? That’s what we wanted!”

“Like hell we’d be no good,” snapped Darcy’s prisoner. “The authorities’ll hear about this!”

Fred ignored the woman, his stare still on his first mate. “We are smugglers, Darcy, not murderers. One does not waste the life of a highly-decorated bounty hunter. Take the helm and watch the skies. I will signal for you.”

Fred silenced him with a stern look. Darcy’s objection caught in his throat, and he immediately bellowed orders to the men. The woman looked at the horizon, her mouth a thin line, loosening briefly to say something quietly to Darcy. The first mate grinned. “Oh, like as not he’ll get her alright.”

Fred did not hear the rest of the exchange. He hurried towards Darcy’s open locker, pulling the flyer out and spreading the metallic hinges wide. The wing fabric was old, frayed, but Fred had no time, and he knew the risks. He put the contraption on his back, secured the fastenings around his waist, rushed to where he could still see the falling airship. He climbed the ropes to the side, his feet planted firmly upon the bulwark. He checked his jacket and found his flare secured underneath his shirt. Good.

Frederick Newgate took a deep breath, and flung himself from the Marchioness.