Flashback Friday! I actually made these last year but realized Fourth of July was upon me and I am so, so tired that I refuse to do anything special, besides maybe eat stuff. And I think there is a barbecue over the weekend, but that’s neither here nor there.

Anyway, going back to food and one of my favorite games of last year, Bioshock Infinite. 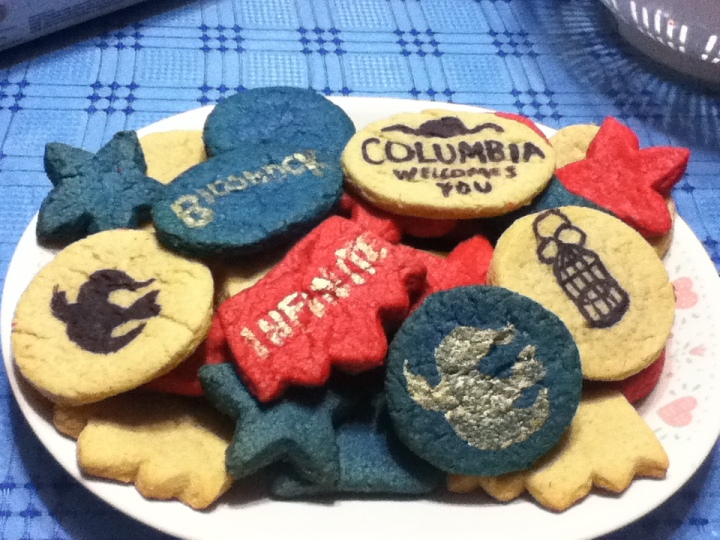 I had a complete Bioshock Infinite obsession last year, as you can tell. Actually, after the Burial At Sea DLCs that came out this year, I’m still pretty obsessed with the game. It’s no surprise that I would do more than just the one food and fandom post about Bioshock Infinite. It was such a pretty and well-done story that it’s hard for me not to love it, and the tie-in to the original Bioshock was fabulous as well.

Of course, these cookies actually pre-date the Lutece cake I made for my sister, and you can probably tell from the shoddy quality of my old iTouch camera. Anyway, onward!

I can’t remember what sugar cookie recipe I used here, but there are dozens on Allrecipes. I split the dough into three portions and colored one blue, the other red. Wasn’t too hard to do, though working with the dough and food coloring could get messy. I used gloves to prevent that.

I also had new glitter-stuffs, so I sought to try that out as well! I used gold dust and bronze dust–separately–and combined each color with a wee bit of vodka (like…a drop at the most). Using a set of paint brushes (which I got cheap at the local arts store), I tested the colors out on different types of cookies. I didn’t paint on all the cookies, just enough to see how the glitter dust worked. The gold was pretty! 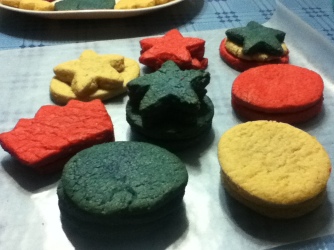