Cheesecake is one thing, but geekified food is always better! And this one screams Lannister Red as anything. Sadly, I cannot take credit for the baking and design of said gloriousness, as this cake was a birthday cake for me made by my sister (whose chibi artistry can be found at Vidaland Comics). But I wanted to add this as a food and fandom post because come on. That is one sick design.

The fandom in place is G.R.R. Martin’s A Song of Ice and Fire (or HBO’s Game of Thrones series), which, if you haven’t noticed through my other Food and Fandom posts, is a pretty popular thing to fandomize these days. I follow the HBO series quite meticulously, but I’m still one book behind on getting caught up on ASoIaF. That said, I do have a fondness for the Lannister heraldry, not to mention the fact that some of the Lannister lions are pretty badass (and some you want to punch in the face…but that’s besides the point). Until she drops many more balls in A Feast for Crows, I actually liked Cersei’s manipulative bitchery. And obviously Tyrion is phenomenal, both on-screen and on-page. But at the moment, Jaime’s probably my favorite of the Lannister children.

The cake: Standard lemon cake with chocolate frosting. Not much to be said, as the mix was from a Duncan Hines box mix (which, imo, is superior to the Betty Crocker lemon), and the frosting was premade as well.

The fondant: Also pre-made. The thing about doing all of the cake and fondant from scratch is you have to have the fondant and cake prepared ahead of time before decorating begins. From experience, fondant work could take an entire day to do, and it’s a hell of a lot of work just to get the measurements and prepping right. So while I’ve made fondant and done cake from scratch before, the taste factor on pre-made mixes is still good, and  the important aspect for this particular cake fell upon the decorating. 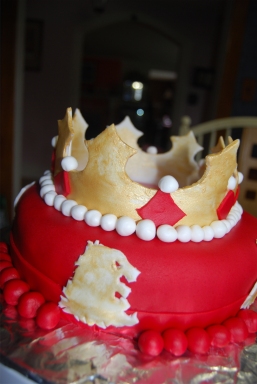 The decorations: Since I was practically banished from the dining room workspace, I’m not sure how the cake formed, other than the fact that I did help put the fondant over the cake. Take note: yes, the cake form was a bundt, because at the time I was using our only cake pan for cheesecake (oops?). In any case, my sister stenciled and formed the crown the night before. She added the Lannister lion in gold, and used the gold glitter dust I had to color in both the crown and the lion. To add further touches, she rolled extra white and red fondant into balls and put them on the cake for a more royal, crown-jewel feel. There was a teeny bit of trouble with the crown itself (the fondant didn’t harden enough so the crown was a little droopy). That said, I think it came out really well, considering my sister isn’t a professional decorator or baker. Kind of like me, except she’s the more artistic one–unfortunately. *cue jealous grumbling here*

When you play the game of thrones, you win or you die. There is no middle ground.

No, Cersei. No middle ground indeed.