Not sure where to draw the line in order to consider what “underrated” would be, but I figure here’s another chance to tout off some of my favorite fantasies that don’t exactly have a huge following on Goodreads (well, some of them have a couple thousand ratings, which is awesome…but you know what I mean). 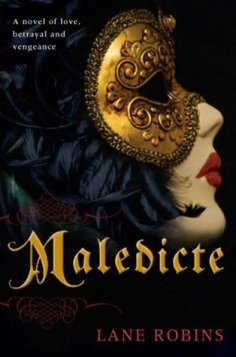 Sorcery & Cecelia or The Enchanted Chocolate Pot by Patricia C. Wrede and Caroline Stevermer – As a Jane Austen fan and an avid follower of Ms. Wrede’s blog, this book is a hands-down delight in all things witty and magical. And it has Thomas Schofield, just one of my many fictional husbands.

Maledicte by Lane Robins – I am kind of surprised at how very few readers have picked this fantasy up. It’s dark and gritty, it’s got a mythos fashioned after a pre-industrial Europe, it has balls and parties and assassins and political mayhem, and it has a girl possessed by a goddess of vengeance. And her sole purpose is to save the man she loves. So clearly there’s romance, too? But seriously, I loved this book.

Once a Witch by Carolyn MacCullough – Now I’ve liked my fair share of YA fantasies that typically have love triangles, but this. This book did NOT have a love triangle. And it played with time travel that I expected to go wrong but was severely happy it didn’t. Also, witches and more witches. And an overall badass family.

Toads and Diamonds by Heather Tomlinson – Tomlinson took the Perrault tale of a girl who talks diamonds and a girl who talks toads and spun it in the throes of a kingdom loosely-based off of ancient India. I mean, a more diverse culture already? Definitely. Oh, and did I mention that neither girl was “bad” in the sense that the fairy tale depicted one of the girls?

Sisters Red by Jackson Pearce – Yes. Another fairy tale retelling (I clearly read a lot of those). This one sounds like one of those YA paranormal romances that’s become the glut of teen reading (I mean, “two sisters become werewolf-hunters with the help of a hunky woodsman–wherein cue love triangle here” sounds just about right), but this was surprisingly good as far as retellings of Little Red Riding Hood goes.

Faerie Wars by Herbie Brennan – I admit I only picked this up because Eoin Colfer had praised it in the cover. And it makes sense, because you can kind of tell it has that Colfer-like humor that I loved in a bunch of his books. Only this one’s about the otherworld, where male rulers aren’t emasculated by being heirs to the Peacock Throne (and thus becoming Purple Emperors) and female rulers can very well take over for their brothers. Oh, and faeries. Yes.

The Perilous Gard by Elizabeth Marie Pope – I seem to have a thing for faerie-fantasy, but whatever. This one’s another goodie that I really liked when I was younger. Actually, if I re-read it now I’d probably still love it. It’s got that Celtic fae vibe and a romantic character dynamic I enjoyed between the heroine and the main squeeze.

Inside the Walls of Troy by Clemence McLaren – Alright, I think this is where my fascination with dual POVs came from. It is probably one of my more favorite takes of two iconic Greek myth characters, and perhaps one of the reasons why I will always love the crazy Cassandra soothsaying character (even though other depictions put her as truly, fantastically out of her bloody mind).

Dragon’s Bait by Vivian Vande Velde – One word: Selendrile. Sigh. Okay, okay, let’s not dwell on the shapeshifting dragon, because clearly they’re not better than shapeshifting werewolves…(crap. I just dug a hole there. I happen to be a little obsessive over werewolves lately…). Anyway, Alys is awesome.

A Wolf at the Door and Other Retold Fairy Tales edited by Ellen Datlow – I’ve mentioned this before in a previous TTT post, but I’ll mention it again because it does have some of the awesomest fairy tale retellings one can find in an anthology. Gaiman and Nix and Yolen? Yespls.