First off, the new, redesigned cover looks so much better than the original that I saw on Goodreads. It probably would have looked cooler if the mirrored water portion showed the silhouette of Eila’s grandmother Elizabeth (in some dated dress), but I can’t complain. It certainly told more stories about the book than two good-looking models getting intimate with each other (not that the book is devoid of lovey wovey stuff…but that’s a different rant coming altogether).

by K.R. Conway
October 2013
YA paranormal romance
Provided by NetGalley 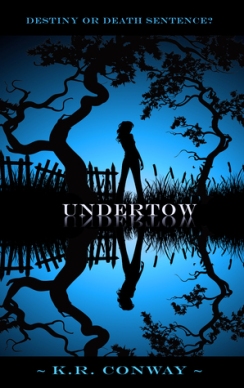 Eila Walker knows luck is not a friend, so she is downright shocked to inherit a million-dollar Cape Cod home. And yeah, her new town isn’t perfect: the cheerleaders are heinous clones, the local undertow can kill ya, and her Great Grams was supposedly fried by lightning in the harbor square. Still, Eila is hopeful her luckless days are in the past . . . until history decides to repeat itself.

When drool-worthy Raef O’Reilly becomes her friendly, yet weirdly protective shadow, Eila thinks life is pretty darn perfect – until she is hauled beneath the waves by an unnatural undertow.

The rest of the summary goes on about the story and somewhere in the Goodreads blurb, but they aren’t really important. It all gets explained in the book in great detail anyway. But yes, the review.

That prologue. I admit I’m always a fan of kickass female flashbacks, and the more tragic they are, the better! The scene with Elizabeth Walker and Jacob Rysse was riveting to read, and I kind of wished–and half-expected–that scenes in Elizabeth’s POV would litter the book. Sadly this was not to be so, and what other glimpse I had to Elizabeth’s past occurred in rare lightning-flashes once or twice more in the story.

Past Grievances. The tie-in from the past to the present was pretty cool, and I liked that there was a deeper family history, with a back story that spanned many years before. I liked that there were characters that had been in Elizabeth’s timeline, who undoubtedly show up again in Eila’s, and thankfully, a majority of them are there to help, not so much to harm.

Eila’s entry into Cape Cod. At first I read the story and thought: “Oh. Teenager moves into new place and is going to start moping at some point, isn’t she?” Eila’s reaction was anything but, and that in itself was a breath of fresh air. It probably helped that the location was a beautiful cape town with a view of the ocean, and living in a mansion would probably perk any moody teenager up. But Eila’s optimism and “nothing’s-going-to-happen-unless-I-go-out-there” attitude made me respect her for a time.

Marsh. Because large, Black Shuck-y dogs (and large werewolves…hem hem) with the ability to shapeshift will always be cool in my eyes.

The mythology. Soul-sucking and soul-channeling is certainly a different way to go as far as supernatural creatures go, though I had the impression that there would be more of the water involved in the story (actually, I initially thought there would be selkies or kelpies involved…but I probably let my imagination go wild there, lol). That being said, I thought it was an interesting take on dual powers, and I am kind of curious as to how the intermingling would go between the two opposite forces. Obviously there was going to be major intermingling here; it is a young adult romance after all.

What I Didn’t Love

More Expos, less Explas please. I admit the story dragged after a couple of chapters. I get that there needed to be introductions put in place, and a setting to describe (and Cape Cod truly is a beautiful setting), but it went on and on, and then finally, BOOM. Action happened. Which took about half a chapter before Eila spends another chapter screaming for everyone to explain things to her. And unfortunately, they indulge her, and what I got was probably one to two chapters of Raef telling her everything he knew that made her familial line special. This doesn’t happen only once, either. Further on into the story, the action takes a huge pause in order for Raines to explain even more back story to a motley crew in the middle of a raging high-class party. Yes, I get that Eila needed answers to be able to move on, but getting that much explanatory dialogue in huge chunks in the middle of the book was like getting an entire back story that could have been explained in short fragmented scenes. Eila dreamt about Elizabeth’s final hours, so I don’t see why she couldn’t have gotten flashbacks of Liz in other situations that would enable her to learn more about the Walker family. I think that would have made things much more engaging, and it certainly would have taken all of those chunky explanations down a notch to not be so annoying.

Mortis = Hot Non-Sparkly Vampires? I admit I was a little lost on how the powers of a Mortis worked. Yes, I get that they feed on souls, and some of them–those that were “altered” by Elizabeth’s shining personality–have converted to vegetarianism. Only, where does the blood come in? Why does blood function as an acceptable substitute to a human soul? I can suspend my disbelief here, but it just seemed too much of a convenient stretch that Mortis can easily just ask for a blood donation and voila, all nice and healed. Jacob Rysse I saw as a Mortis. Raef and Kian? They seemed more similar to the YA take on vampires than anything. Also, I couldn’t take Raef seriously at all; he was constantly described as a Greek deity, and all I could think of is this. Really attractive, I know.

The romance. My constant initial reaction to insta-love these days:

For supernatural beings with no souls, the several named Mortis characters seem to be doing well on acts of romance and such. I wasn’t too thrilled by the head-over-heels attraction and the continual goo-goo-gaga-ness that Eila seemed to succumb to every frellin’ time beautiful, hot, chiseled Raef came in the picture (nevermind that she’d been creeped out by his shady actions BEFORE she’d seen him in person). Seriously, girl, get over it, please, somebody’s trying to kill you, and it is so not the time for mooning over a boy (not to mention the fact that Mortis blood can very well take her out of existence, but hey, Eila doesn’t seem to care because she and Raef share a DEEP SEXY SEXY CONNECTION, so why should we?!). Ana was also more interesting when she was furious with Kian and not trying to snog him–by the latter half of the book, the “I love you”s got over-the-top, and I was feeling sorry for friendzoned!MJ because I thought he was the most badass of the lot. Don’t even get me started with who ends up with Raines.

So did I like the story? Sorta kinda, but I was expecting something that would try to break out of the YA paranormal formula, only to find that it mostly fell in lieu with the tropes that are too well-known in the genre. That said: at least there wasn’t a love triangle.

3 out of 5 Goodreads stars!

One thought on “Review: Undertow by K.R. Conway”