I want to go to Prague. I want to meet a fiery-eyed angel there and be raised by strangely loving but shady teeth-collecting demons. I want to be friends with a marionette maker’s daughter and roam the fairy-tale streets whilst vampires and ghouls try to pull a scare on back alleys and hidden corners. I want wishes, even small ones that could change my hair a bright blue (except mine would probably be a mixture of gold and purple, just ’cause). I want the feel of astral butterflies fluttering excitedly in my stomach (though that can’t be too comfortable on a regular basis). I want wings so I can fly. Particularly wings that emit a self-contained fire.

God, if Daughter of Smoke and Bone could be any more poetic, I probably would have cried over how beautifully written it was.

DAUGHTER OF SMOKE AND BONE

Goodreads: Meet Karou. She fills her sketchbooks with monsters that may or may not be real, she’s prone to disappearing on mysterious “errands”, she speaks many languages – not all of them human – and her bright blue hair actuallygrows out of her head that color. Who is she? That is the question that haunts her, and she’s about to find out.

When beautiful, haunted Akiva fixes fiery eyes on her in an alley in Marrakesh, the result is blood and starlight, secrets unveiled, and a star-crossed love whose roots drink deep of a violent past. But will Karou live to regret learning the truth about herself?

Laini Taylor writes such pretty things.  This isn’t the first time I’ve been introduced to her writing, so I had expected writing that took me back to what I had seen in Lips Touch: Three Times and somewhat in Blackbringer. What I got was a love child between urban fantasy and faerie, with the short story “Spicy Little Curses” as the doting world-traveling aunt. For me, that made for some enjoyable writing, and even holding a physical copy of the book itself was much more preferable, since the layout usually tends to be just as aesthetically pleasing as the text (Lips Touch still remains my favorite of the hardcovers I own). 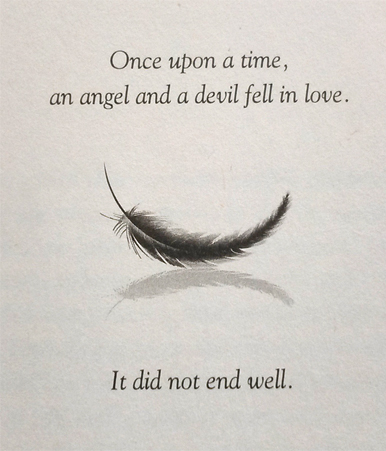 The star-crossed lovers trope gets a new set of wings. Admittedly, I could do without having to read another Romeo and Juliet complex. Warring families, lovers belonging on opposite sides, blah blah blah. Karou and Akiva are no different, true. Well, save for the fact that Akiva belongs to a race of elitist warrior angels and Karou’s an art student whose hair grows blue at the roots and who works for the chimaera abominations that are supposedly no better than slaves. But, you know, same old story, right? Maybe. Kinda not really.

I guess there’s the magic system and the mythologies to blame for that. There’s also the fact that “good” and “evil” aren’t exactly classified as such, and even the monsters can be construed as more beautiful than the regal seraphim in Astrae. I also love that each side has a story about origins, and that this is shown in the book.

And those characters, yo. Zuzana was easily my favorite character, and often she made me laugh out loud on the train as I read (which is slightly embarrassing, but oh well). I loved Karou’s personality, and even as she fell into insta-love (can it be classified as insta-love when technically it’s been seventeen or so years?), she didn’t completely forget who she was (sorry, Akiva!). I loved Brimstone and the chimaera and really hope the ending was ambiguous enough to leave a bit of Hope at the door–I mean, that’s the whole point, right? Hope is more powerful than wishes after all.

That heartbreaking ending. I would have considered the Madrigal addition as the slowest point of the book, but I actually loved that the story was shown that way, and not through explanatory dialogue. That said, I did realize, with increasing anxiety, that the book was ending and a conclusion was not happening any time soon. Yeah, I totally felt like I was broken up with twice in that second to last chapter. But I won’t elaborate…

So yes, easily a 5 out of 5 Goodreads stars.

A Little Taste of Prague

The beginning chapters of the book opened up to a lot of description about the places Karou frequented in the mortal realm. Which is a good thing, because I loved envisioning Taylor’s Prague, and loved reading about the quaint little Poison Kitchen cafe and the food Karou and Zuzana tended to get there. At some point, there was a scene in the book where Karou offers to get breakfast, and Zuzana says something similar to: “If it doesn’t have chocolate, it’s not breakfast.” (I can’t remember exactly, so the wording might be off). Karou walks back to the bakery and buys kolaches.

So immediately, I had a craving to make myself some of these baked morsels.

Unsurprisingly, there was a kolache recipe out there waiting for me to make. And so I took some time to bake some!

Granted, “some time” kind of encompassed a day and a half, considering I initially thought I’d killed my yeast (which was remedied by me putting the dough inside my oven over a tray of boiling water). There was a lot of waiting for the dough to rise–at least three times. But other than that, since I skipped out on making the fillings from scratch, once the bread was actually ready, it took a mere 20 or so minutes to flatten it, fill it, and bake it. 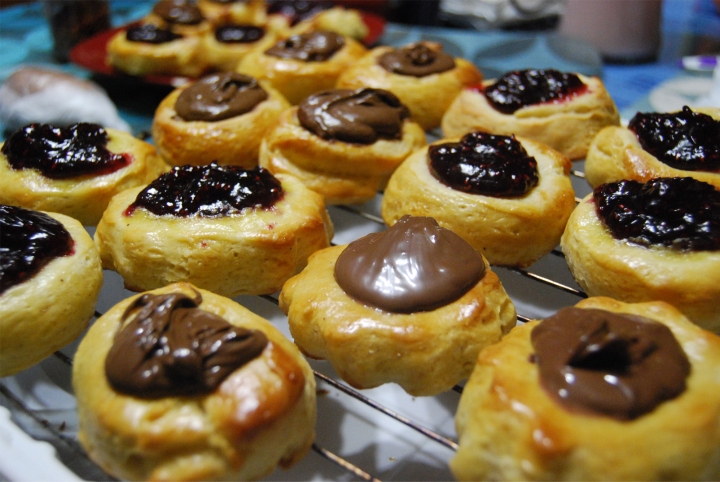 Note: Since Thanksgiving is around the corner, I found a lot of fruit pie fillings at the supermarket for sale, so I went and got a raspberry filling as well as an apricot one. I didn’t use the apricot filling, though, since I wanted to put chocolate in at least half of the kolaches. As Zuzana said, no chocolate, not breakfast!

Verdict: Personally, I loved the baked Nutella texture more than when I put it on top after the bread baked. My sister is the opposite, and liked the Nutella nice and creamy. My mother decided the raspberry filling was nice, but not as nice as speculoos spread, and my father liked just the bread itself without any of the sweet toppings. Honestly. I think as long as the bread is baked, you can put whatever toppings you want on top and it’ll come out brilliantly.

13 thoughts on “25 Reads: Daughter of Smoke and Bone by Laini Taylor”

When you're groaning with dread because all you want to do is read about your favorite unprincipled but brilliant murdering thief lord, and yet have to stop because you remember you have a school group meeting tonight. #workneverends #ijustwanttoread #crookedkingdom #leighbardugo #kazbrekker #bookstagram #books
It's been a while since I've had to finish a short story on a deadline...and I'm off to get some inspiration! (And mochi donuts...and bubble tea...)