There was something about reading The Scarlet Letter that always puts me to sleep. It’s probably why when this was one of the reading options in school, I never got to it and chose to read larger paperbacks, like The Fountainhead. Gods, now that was a long read (though admittedly, enjoyable). What I am trying to say is, I know it’s a prominent literary work, but if manga and the movies are alternate ways of reading The Scarlet Letter, then my goodness, I will take it however I will. 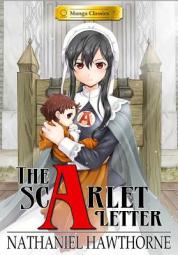 A powerful tale of forbidden love, shame, and revenge comes to life in Manga Classics: The Scarlet Letter. Faithfully adapted by Crystal Chan from the original novel, this new edition features stunning artwork by SunNeko Lee (Manga Classics: Les Miserables) which will give old and new readers alike a fresh insight into the Nathaniel Hawthorne’s tragic saga of Puritan America.

Woman cheats on husband and gets branded by her no-nonsense but hypocritical community. Husband finds out about his wife’s indiscretion (I mean, how could you not when she’s clearly holding a child in her arms that was most definitely not conceived by the couple?), and swears vengeance on the homewrecking mystery man. Repercussions happen many years later, culminating in a melodramatic ending. You know, just a couple of episodes of a modern soap opera playing in Puritanical America.

I’m not sure what rubs me the wrong way about this story (other than the horrid Puritanical backdrop I never liked reading about to begin with), but not even the stellar illustrations by SunNeko Lee got me fully invested in the adaptation, not as fully as Stacy King’s previous adaptation of Austen’s Pride and Prejudice (which I also had the fortunate opportunity to review). It’s definitely dependent on the premise, because I did love the Austen books to begin with, and Hawthorne was mostly required reading for me.

That being said, I thought, as far as the story went, the manga portrayal appeared accurate to the book (as far as I could tell, of course, having never read the actual book and only basing on comprehensive summaries and theme analyses on the interwebs). The illustrations were definitely the best parts of the story, especially in the depiction of Hester’s husband and daughter. The manga certainly gave a more vivid description of the story just on illustration alone, and for that I much appreciated the story.

3 out of 5 Goodreads stars! If anything, it gave me the urge to watch Easy A again…