Technically I finished the book last year, but didn’t get the review in on time because I was busy with other things…like finishing my 75th book to end 2014. No regrets there, because I ended with two fabulous books in my arsenal! 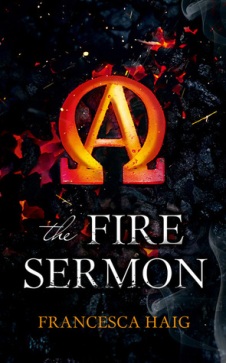 Four hundred years in the future, the Earth has turned primitive following a nuclear fire that has laid waste to civilization and nature. Though the radiation fallout has ended, for some unknowable reason every person is born with a twin. Of each pair, one is an Alpha—physically perfect in every way; and the other an Omega—burdened with deformity, small or large. With the Council ruling an apartheid-like society, Omegas are branded and ostracized while the Alphas have gathered the world’s sparse resources for themselves. Though proclaiming their superiority, for all their effort Alphas cannot escape one harsh fact: Whenever one twin dies, so does the other.

Cass is a rare Omega, one burdened with psychic foresight. While her twin, Zach, gains power on the Alpha Council, she dares to dream the most dangerous dream of all: equality. For daring to envision a world in which Alphas and Omegas live side-by-side as equals, both the Council and the Resistance have her in their sights.

The straight-into-action beginning. No doubt about it, the minute the first paragraph hit, Cass was already in trouble and the story was well under way. That said, it wasn’t all just action after action of things happening; some of the story slowed down enough so that a bit of explanation of how the world worked in the After could be extracted from the pages.

The fact that Cass wasn’t taking sides. Not really. This could have easily been a fight between “Alpha” and “Omega,” which would have easily gone to an “Us” and “Them” situation, since Cass IS an oppressed Omega. But Cass pretty much threw that out of the window with her ideals–however naive they may be. Sure, she made some mistakes, and perhaps she gives her brother Zach too much credit, but there’s something interesting about her idea of a world where twins should coexist peacefully.

The dystopian world. It’s an interesting concept, that only twins get born for everyone after a fallout from four hundred years back, and that there are certain facts that come along with this birthing process. For one, Omegas are scarred in some way–physical, in the case of Piper, or mental, in the case of Cass. All Omegas are infertile as well. Because of their abnormalities, Omegas are cast out and split from their Alpha twins, who are generally accepted and venerated on a higher pedestal. The problem with this societal gap is that Omegas can bring their Alphas down. If one twin dies, the other does, too. There are definitely a lot of issues to be had with this world, and frankly, I could not wait to see how things unfolded within the story.

The characters. I found myself rooting for Cass’ supporting characters, albeit not all of them stayed with her throughout the book. The story was slightly weird in that certain chapters encompassed years, others weeks, while some more took place in a span of hours and days. Cass moved from place to place, and while this certainly did get hectic, there was a full-circle return to the place Cass left at the beginning of the story.

*SPOILER ALERT* Piper and Zoe. ‘Nuff said. Best characters ever. I was hoping this kind of twin camaraderie would show up to challenge the status quo, and for the most part, they do. I might be a little devastated if they perish in the next books to come, but considering what already happened in book 1, I wouldn’t be surprised. (Actually, what would be surprising is if the scientists found a way to separate the twins where one of them dies and the other doesn’t…now that would be something–but I suppose it’d defeat the purpose of the book, yeah?).

What I Was Iffy About

That cover. Actually, it’s not too bad a cover, but right now I’m using the UK version, because I thought that was gorgeous and made absolutely more sense with the addition of the Alpha symbol within the Omega symbol.

The title. Maybe I missed it when I read the story, but I’m not exactly sure why the title makes any sense. Did it refer to the fallout, or the Blast, as Cass referred it to? Did it refer to Cass setting a forest on fire to make a statement or the fire in the island because Alphas wanted to make a statement? I suppose I could wait for the next book to come out, because the title/series title might have a bigger picture in mind, but that’s going be a while, considering this first book is going to be just published in a few months.

*SPOILER ALERT* Kip’s predictable twin-fession. Maybe it’s just because my mind’s a little messed up in the sibling department (yes, I totally love my siblings, can’t you tell? XD), but I totally called it about Kip’s background. From the moment Cass broke him out and then got stalked across the countryside by the Confessor, I had the theory that Cass was looking at it the wrong way. Of course, Cass eventually realized her self-centered mistake, but not until it was too late. By then I was mostly just rolling my eyes and going “WHAT DID I TELL YOU?!” in that shake-my-fist-at-a-book kind of way.

4 out of 5 Goodreads stars! I am surprised at how much I enjoyed the story, but enjoy it I did.