I’m slightly regretting giving away my autographed ward sticker/tattoo swag to a friend for his birthday, because I’d have totally kept it and warded my forehead. Kind of like this “lovely” lady but in Peter V. Brett’s series. Just saying. 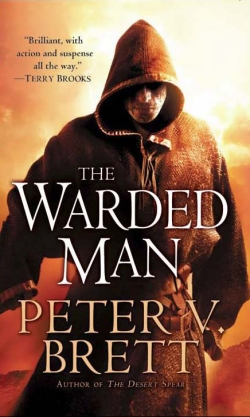 As darkness falls after sunset, the corelings rise—demons who possess supernatural powers and burn with a consuming hatred of humanity. For hundreds of years the demons have terrorized the night, slowly culling the human herd that shelters behind magical wards—symbols of power whose origins are lost in myth and whose protection is terrifyingly fragile. It was not always this way. Once, men and women battled the corelings on equal terms, but those days are gone. Night by night the demons grow stronger, while human numbers dwindle under their relentless assault. Now, with hope for the future fading, three young survivors of vicious demon attacks will dare the impossible, stepping beyond the crumbling safety of the wards to risk everything in a desperate quest to regain the secrets of the past. Together, they will stand against the night.

I kind of blame having read the stories of the Unfettered anthology for putting The Warded Man high on my priority list (“Mudboy” was one of my favorites from the collection). I kind of blame showing up at a Comic Con panel where the author did a reading of The Desert Spear a while back (although I couldn’t tell you what the reading was about, since I tend to block out spoilers, I do remember getting intrigued enough). I mostly blame the fact that I eventually found my paperback copy of the book staring eerily at me at the top of my bookshelf. Trust me, you don’t want the Warded Man staring at you. It’s unnerving. My eventual thought process went along the lines of: “FINE. I’LL READ YOUR STORY, GOOD SIR.”

The point is that I’ve read the book (finally). And I frelling loved it.

And This Is Why

The fantasy-touching-on-science fiction feel of the world. For hundreds of years, Thesa’s nighttime has been filled with a nightmare of corelings, often associated with mankind’s Sin–scientific advancement–against the Creator. Because of the corelings–dark creatures of magic–the world of science and technology have since ceased to exist, leaving a civilization akin to the Middle Ages. I love this mesh of scifi and fantasy. I really do. I also play too much Final Fantasy so my bias can be related to that.

The character trifecta that consists of Arlen, Leesha, and Rojer. I honestly had no problem switching between the three characters, they were all pretty interesting to follow. Once their storylines finally (like, last quarter of the book FINALLY) converged, I couldn’t stop reading. Their interactions were fantastic, and I pretty much spent the last hundred pages squeeing over how awesome they were. Well, the last fifty pages was really me squeeing over how awesome Leesha was, but I can’t help loving female badasses! (AND SHE CAN SET BITCHES ON FIRE, SO THERE.)

The pacing was paced pacingly paceful! I expected action from the get-go. I mean, come on, it’s a world where demons come out at night to slaughter the unprepared, so there was going to be a lot of action. But even in the introductory capacity, there was a lot happening, but not too much. It was just the right amount of action that kept my attention span happy. (My attention span with high fantasies tend to lean toward the three-year-old mentality.)

There was a frelling ending. The Warded Man is only book one of The Demon Cycle series, which I understand is a quintet. I’m still not sure how to feel about the fact that not all the books are out yet, but it’s probably along the lines of shaking my fist at the world and thensome. But what I loved about this book in particular was how the ending was settled. Three storylines converged to a final point, and even though there are many untied knots, the endgame of book one was, to me, solved within the parameters of the book. None of that crazy cliffhanging nonsense most series tend to do (I’M TALKING TO YOU, LUNAR CHRONICLES–I STILL LOVE CINDER ANYWAY). Oh, great. I might have jinxed it for the later books.

Also, those wards. I want to know more about the wards. And the elemental corelings. Speaking of which, for some reason I’m imagining wood demons look like Groot. And those rock demons are oversized golems.

Suffice to say I’m going to need to get a copy of The Desert Spear at some point. Pun not intended.