What I like about the urban fantasies I’ve read is that they’re terribly quick reads. Jinn and Juice in particular is no different, only that it had a couple of things going for it. Belly-dancers in burlesque clubs being one of them. Mildly oracular drag queens being another (I kid you not). 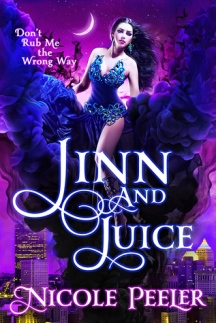 To escape an arranged marriage, a jinni granted Lyla her wish: to live a thousand years as a jinni herself.

Now, her servitude is ending, but there are a few obstacles in Lyla’s path to freedom. A Magi intent on binding her again, a jinni bent on vengeance, and not to mention the nightmare from her past that threatens to make her curse permanent — and claim her very soul.

Jinn and Juice is the first in a new series by fantasy writer, Nicole Peeler set in a world of immortal curses, vengeful jinni and belly dancing.

My understanding is that there was a Kindle edition of this novel published a few months ago, so when I was looking at the Goodreads blurb and reviews, I was befuddled by why the main character kept being referred to as “Leila” instead of Lyla. Clearly her name was one of the things that received an edit, among other things. So keeping this mind, what I’m reviewing is the paperback version (which is out today, believe it or not!).

Jinn and Juice had many things going for it, namely the characters, mainly Lyla and Rachel. Mostly Rachel, but Lyla is the main character, and her voice tended to make me laugh almost as much as the aforementioned queen of drag. Because of the strange, supernatural circumstance that Lyla is in–she’s a jinni living in Pittsburgh, working in a burlesque club for supernaturals–her friends are just as interesting as the cursed half-human of smoke and fire. In fact, one of the first things the reader sees is Lyla’s interaction with her two besties: a Slavic Will-o’-the-Wisp (not sure how this worked out, because Yulia could have been any number of Slavic faery with similar traits to its Celtic counterpart) and a psychic drag queen. Top that off with the introduction of other supernatural beings: a succubus with a stripper name (Diamond), fighting spider-twins (Trip and Trap), a troll bouncer (Bertha), and the Oracle of Delphi (Charlie). If there was ever a time to mention motley crew, it would definitely be now.

As kitschy as this sounds, the variety of supernaturals actually worked for me, because I was often entertained by the manner in which they faced Lyla’s curse. When the Magi (Oz, short for Ozan) eventually made his appearance, things certainly escalated quickly, and I don’t think the story really slowed down since.

A bunch of them were cringe-worthy, though. Examples:

[She] rolled her eyes, a very American gesture, and I wondered if she’d been watching 30 Rock when she wasn’t planning to take over the world.

I wasn’t aware the eye-rolling business was exclusive to 30 Rock. I’ve been watching the show recently and know Liz Lemon gives us quite the eye-roll, but uh, this commentary was extremely excessive. For all I know, the person in question could have been watching Judge Judy all day, too.

[He] glanced away quickly when he saw my bared shoulders, obviously only then realizing I slept a la Eve.

Pretty much hit or miss, if you’re not familiar with the character or thinking about someone else entirely. Also, this over-complicated the sentence. Whatever happened to good ole’ “in the nude?” Just saying.

Then there are the several other random pop culture quips that just made me scratch my head with confusion:

Under normal circumstances I might have been tempted to play a little hide-the-shamrock with this guy.

As I’d thought this [sorcerer] was far stronger than we’d originally assumed. And, apparently, the Fagin of Sideways.

“…Eventually, after searching the cosmos, he found Man.”

“That’d be news even to Neil deGrasse Tyson,” Oz said.

I just…yeah. I failed to be amused here.

My only other huge problem with the story was the villain motive. Or, well, villains’ motives. I mean, honestly, one power-hungry villain was fine, but several of them all gunning for the same thing, one right after the other? It’s silly. The big villain reveal was pretty awesome up until the point where I got disappointed in the motive. [SPOILER ALERT] Seriously, I had no idea what Tamina’s problem was. Her grandmother was reportedly a powerful Magi in her own right, so why is the damn fool ranting about being undervalued because she’s female? [END SPOILER] Alright, I can forgive one megalomaniacal character, but when several other villainous characters show up, their motives END UP BEING THE SAME, which was quite literally WORLD DOMINATION.

I did, however, like that many of the questions and tied knots were answered and loosened by the end of the book. It is a series, so obviously some things were left open for speculation, and many others–like Lyla’s much-needed instant gratification–are left for further novels to explore. And I’m pretty glad about the recurring secondary characters, because I’m sure they’ll come up again going forward.

Overall, I did enjoy the story. Lyla was a fun perspective to jump into, and while there were occasional times where I wanted her to be more aggressive over her unlucky situation, the jinni in her more than made up for a bit of her passivity.

And with that, I end with something Rachel would say about the dangers of jinn and the Pittsburgh juice: