You know that chocolate dessert that is so decadent and so rich and so delicious that the very thought of partaking in it sends you into a heightened sense of euphoria? I’m sure you know what I’m talking about. This dessert is a once-in-a-lifetime thing, because let’s be honest, you just can’t afford it every time, or it’s just bad for you.

Very, very bad for you.

But frell, so very, very worth it. 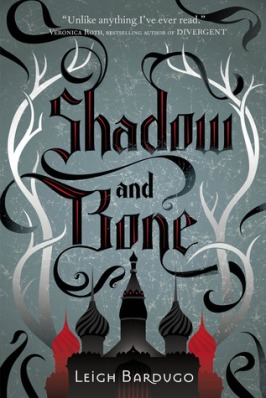 Surrounded by enemies, the once-great nation of Ravka has been torn in two by the Shadow Fold, a swath of near impenetrable darkness crawling with monsters who feast on human flesh. Now its fate may rest on the shoulders of one lonely refugee.

Alina Starkov has never been good at anything. But when her regiment is attacked on the Fold and her best friend is brutally injured, Alina reveals a dormant power that saves his life—a power that could be the key to setting her war-ravaged country free. Wrenched from everything she knows, Alina is whisked away to the royal court to be trained as a member of the Grisha, the magical elite led by the mysterious Darkling.

Yet nothing in this lavish world is what it seems. With darkness looming and an entire kingdom depending on her untamed power, Alina will have to confront the secrets of the Grisha . . . and the secrets of her heart.

Outwardly, Shadow and Bone is a pretty book, with a pretty premise, and a helluva interesting magic system. It’s set in a Russian-inspired world, during a time of war, where the Ravkans live in fear of the Grisha, the King, and the notorious Shadow Fold. It has a girl who’s got all this potential, a boy she loves, and a man with the power to change the world.

It also has all the trappings of a YA novel. The protagonist was so very reminiscent of every other heroine of the genre that had I been reading YA books one after the other, I probably wouldn’t have rated this book as high as I did because to be honest, Alina’s constant self-denigration got on my nerves.

Then the Darkling showed up, and by the grace of the heavens, I was smitten.

It’s not even a rational reaction. In all respects, I probably should have waited to make any judgments of characters until the very end. But I couldn’t help myself when I was reading the book. The Darkling was the very bad, but oh-so-good chocolate dessert. Alina didn’t stand a chance. I didn’t stand a chance. Nobody did. And even after all my suspicions, and all my delusions, I’m still shipping a relationship that I shouldn’t be shipping, because by the end of this book, IT’S NOT RATIONAL.

Well screw it. I think I’m in love with Bardugo’s villains.

That being said, I will say this of the good guys: they kind of won me over, too, especially during the whole Tsibeya stag-hunt scene and that bit at the end in the Shadow Fold. Still, I have every hope that the bad guys continue to fight the bad fight. *coughs*

I’ve been thinking about starting a little section for my blog reviews, where I highlight a female character in the story. Not sure I’m sticking with this format yet, but no harm in experimenting! 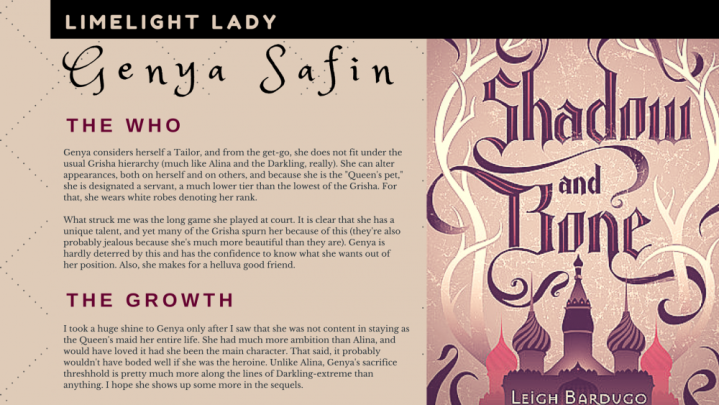 8 thoughts on “25 Reads: Shadow and Bone by Leigh Bardugo”