Better late to the party than never having arrived, am I right?

I meant to write an overall review of the entire trilogy, but I realized I wasn’t going to be doing the series justice, considering I’ll probably be rating each book differently. Already Insurgent is feeling a bit more epic than Divergent as far as my enjoyment factor goes, so I’ll do separate reviews for each. 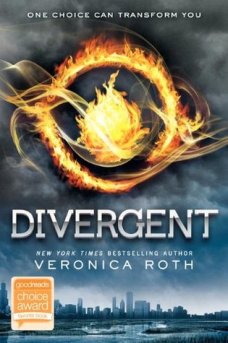 In Beatrice Prior’s dystopian Chicago world, society is divided into five factions, each dedicated to the cultivation of a particular virtue—Candor (the honest), Abnegation (the selfless), Dauntless (the brave), Amity (the peaceful), and Erudite (the intelligent). On an appointed day of every year, all sixteen-year-olds must select the faction to which they will devote the rest of their lives. For Beatrice, the decision is between staying with her family and being who she really is—she can’t have both. So she makes a choice that surprises everyone, including herself.

During the highly competitive initiation that follows, Beatrice renames herself Tris and struggles alongside her fellow initiates to live out the choice they have made. Together they must undergo extreme physical tests of endurance and intense psychological simulations, some with devastating consequences. As initiation transforms them all, Tris must determine who her friends really are—and where, exactly, a romance with a sometimes fascinating, sometimes exasperating boy fits into the life she’s chosen. But Tris also has a secret, one she’s kept hidden from everyone because she’s been warned it can mean death. And as she discovers unrest and growing conflict that threaten to unravel her seemingly perfect society, she also learns that her secret might help her save those she loves . . . or it might destroy her.

I don’t know why it took me this long to start this series. I’d been contemplating reading this book since the hype for it began, and thought: “Oh, this might fill the void that Uglies and The Hunger Games trilogies left me with!” Years later and two movies down, I finally decided to get myself in gear and finally read up on what the hype was about.

Of course, this didn’t stop me from watching parts of the movie before I’d read the book. I blame my cousin for that. And Maggie Q. Not that it matters because I pretty much wasn’t paying attention to the movie anyway. Now that I’ve read the book, though…I might just have to watch it fully.

I probably won’t get as much kick at watching the movie than I did about reading the book, because then I can imagine Four the way I like. Not that movie-Four strays too far from imagination, mind. That being said, I loved the characters. They felt “real” in a “they all have feeeeeeeelings” kind of way, and every single one of them had some sort of physical and personality trait that told them apart from the others. Will and Christina and Al, Uriah and Zeke and Marlene, Eric and Edward and Peter even. I much appreciated the characters because even the most annoying ones are not completely two-dimensional. Unless, of course, you’re Jeanine, but that’s a different story.

Tris beats herself down a lot, which did get ingratiatingly annoying, since some of the smallest fictional females I know pack the biggest punch. At this point, I wasn’t sure I was loving Tris at all. Then, of course, the fear simulations began and I admit I gained a growing admiration for this tiny girl with many flaws. Things moved slowly with her as far as making friends and gaining ground within Dauntless went, but somewhere in the book shit happens and things escalate in a manner that made me go: “WAIT. WHAT’S HAPPENING. OMG MUST KEEP READING.”

Or maybe that was lack of sleep talking, who knows.

The romance I liked. I’d say more on the matter, but there really isn’t much else to say other than that I actually see myself shipping it. I like Four. I like Tris. Together they make me giggle a bit because their conversations tended to blow hot and cold and yikes that boy knows how to save and sweep a girl off her Dauntless feet. Not that Tris needs much help on the saving department, though I’m sure she appreciates not having to do everything herself once in a while.

The only thing that bummed me about this book was that I got a bit attached to characters that died. Boo, Roth, BOO.