With her novel, THREE GREAT LIES, debuting on August 6th, it’s high time we also get a little look on the author herself via interview! 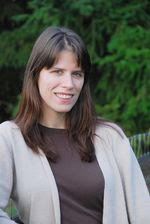 1. Tell us a little about yourself.

I’m a tattooed, vegetarian, outdoorsy woman with one head in the clouds and the other firmly settled in my hiking boots. I’m an environmental engineer by day, author, runner, reader, gamer, naturalist by night (and weekends).

2. When did you start writing, and why?

When I was a wee lass I’d make up stories to tell my mother while she was gardening. I think it started there. My favorite subject was Baggy Piggy, who had a curly Q tail that never ended (I knew this, because I drew him incessantly with pink crayons). I remember, before I could even write, ‘writing’ (aka doodling) on paper and then reading them to my great grandmother. Storytelling is in my blood. I guess that’s enough of a reason why.

Though the fact that I enjoy it doesn’t hurt. I have little people in my head (doesn’t every author) that want me to explore their worlds, flesh out their personalities and goals and give them something to do. I can’t take all the credit, it’s partially their fault.

I write speculative fiction. Mainly fantasy, though I mix horror and magical realism in there. I write fantasy because fantasy is what first got me excited about reading. I remember my older sister, Audrey, handing me the first of the Pierce Anthony Xanth novels, and I was astounded at these magical places, characters with magical talents, all of the magical beasts. Magic. Magic. Magic. I wanted that. To live there. Be special. Be something more than just human.

And I read as much fantasy after that as I could. Tolkien, Eddings, Pratchet, Weiss and Hickman, Duncan. You know the era and the authors. That’s what fueled me as a young reader. I hope to fuel other readers too.

And the joy comes from creation and imagination. Of speculating: What if? and expanding from that. I am the master of my own universe, what is not to like?

4. What is your latest book? Any forthcoming books?

My debut novel, Three Great Lies, releases August 6th. It’s fantasy, with historical and literary trappings. It carries a bit of a Finding My Place in Life theme.

Jeannette Walker, a modern scientist, ends up in ancient, mythological Egypt. Though she constantly casts doubt on the existence of such a world, she has to learn to live in it. While trying to save her mummy friend’s soul from a wicked tomb robbing ring, she realizes a few important things about life. What those are, well, you’ll have to read the book!

I have one complete manuscript for a dark fantasy I’m currently shopping out, and am working on a modern super hero series. There’s always something I’m working on.

5. “Welcome To My Worlds”: Tell us a little about the world of Three Great Lies.

Ancient, mythological Egypt. It never rains. People’s lives aren’t equal. Prayers constantly dance upon lips. Beer is a meal. Sand is a major filler in the bread. Children of gods walk the street with the heads of animals and prophecy on their lips.

To Jeannette it’s, of course, a total shock. There are people about in public naked and jackals speak. A mummy—a desiccated, lumbering thing—chases her through the crowded streets, accusing her of stealing his ba! It’s not necessarily a friendly place, but people are people, and even Jeannette is able to find friends in ways she never expected.

6. Introduce us to some of your characters. What do you like about them?

Jeannette Walker is my protagonist. She’s mid-twenties, a scientists with a jilted past. She still holds the hurt from a past betrayal and has learned to trust nobody and nothing. I love her voice and her mind-chatter. And she’s got a good heart that struggles to show through her armor.

Abayomi is the dead man walking, a reanimated mummy who seeks his lost ba container so he can continue on to the afterlife. He’s a perfect citizen who knows his place in the world and doesn’t seek to unbalance tradition. Until his friends are endangered, then his loyalty shines like a beacon. True best friend material!

Sanura is the young daughter of Bast, cast out from her litter. She’s lost and alone and Jeannette saves her—saves her—and she’ll never forget such gifts. Sanura, like most young people, is soul-searching, trying to found out exactly why she’s been cast away and what her purpose and place is in life. Her journey is one everyone can connect with. She’s the spirit of the story.

7. A fun fact you would like your readers to know about Three Great Lies.

A major aspect of the book (the stray dog theme) sprang to life at an agility dog show. The midsummer day was baking hot and I had parked myself under a tree for the next show. A Jack Russell Terrier was looking at me, with that intelligent tongue-lolling smile terriers have. Honestly, the dog was smiling.

And that was the original start of the novel: “The dog was smiling at her.” It’s since changed, but that line and scene are still in there, the theme planted throughout the novel. The story just unfolded from that one dog’s smile and here we are now.

8. Any challenges with getting Three Great Lies to where it is today?

Three Great Lies has been on a long journey.

In 2008, I wrote my fifth NaNoWriMo novel. That was Three Great Lies. It was titled simply “Egypt” back then. It was a 50,000 word rough draft. Then I added extra plot threads and themes, and it topped out at 140,000 words. That’s quite an addition! Then there were years and years of critiquing and editing.

Finally in 2013, I begin seeking representation for Three Great Lies, and it was picked up by Hadley Rille Books (which was the most perfect place for this book to land).

Now for the rough stuff. As I was due my edits, my publisher had a stroke. (Though he insists he was abducted by aliens to an alternate universe.) It was terrible, we weren’t sure if he would make it. The entire press huddled together in worry and anticipation. I was wavering between feeling devastated for my publisher’s situation and worrying about the state of my book (and feeling so so guilty for that.) But he did pull through and has worked tirelessly on my novel, by my side every step of the way.

Now, we’re here, and my novel is published! I think other authors might have pulled their book to seek other representation, but I knew Hadley Rille and my publisher were perfect for my book.

First and foremost, Three Great Lies was a ‘pantser’ book. I didn’t have an outline. I wrote forward from the smiling dog on guts and intentions. I had this idea of where I wanted to go, with no map on how to get there. Now, I am an outliner. I think the process, for me, would have gone so much faster if I’d had a more solid idea of the substance of the story. As it was, lots and lots and lots of editing and rewriting were necessary to make this book shine.

When I’m in the thick of writing and editing, I try to work on the novel every single day. It keeps my writing sharp and my mind on the storyline. It keeps me from losing plot threads and missing finer details. For me, every day is the way (ooh, that even rhymes.)

And another thing I’ve learned: Do not work heavily on writing in the summer. I like to play outside too much and I feel guilty if I don’t write. Now, I just hold up my hands and let it all go. Summer, for me, is play time. No guilt for taking some time off writing. Because, we’re our worst guilt-trippers.

10. Blog/site link, and where your book is available.

You can find me at: http://vanmaclellan.com/

You can find Three Great Lies at Amazon

Thanks for reading! I hope you come by and check out my site and my novel. It was a joy to write and I hope it brings joy to you as well.

While vacationing in Egypt. . .

Jeannette Walker, a cynical scientist jaded by swarms of tour groups and knick-knack shacks, is lured by a teenage tour guide to visit a newly discovered tomb. No other tourists there! Inside the chamber, she tumbles down a shaft and 3000 years back in time.

Now, in a world where deities walk the streets and prophecy stinks up the air, Jeannette is desperate for normal and the simple pleasures of sanitation and refrigeration. However, a slave master hawking a cat-headed girl derails her homebound mission, and Jeannette—penniless in this ancient world—steals the girl, bringing down the tireless fury of the slaver.

Saddled with a newly awakened mummy and the cat-headed girl, Jeannette, through her unparalleled experience gained from watching spy movies, contrives a plan to free them from the slaver’s ire, but will she have to dive into the belly of the beast to succeed?

What is this 90-degree muggy weather?! Oh well. I GUESS this means I'm staying inside all day. 😎📚☕
Curry with friends! So good!