This is probably the second YA dystopian where I liked the sequel better than the first book. Not by much, but definitely enough to garner an enjoyable factor of five Goodreads stars. Not that the book was perfect (really, it’s probably closer to 4.5 stars, but Goodreads doesn’t let me rate in decimals!), but I certainly found it riveting enough that I immediately picked up Allegiant soon after.

Warning: As this is the second book of the Divergent series, it will not be a completely spoiler-free review (though I try not to give too much away).

by Veronica Roth
Katherine Tegen Books, May 2012
YA dystopia
Rated:

One choice can transform you—or it can destroy you. But every choice has consequences, and as unrest surges in the factions all around her, Tris Prior must continue trying to save those she loves—and herself—while grappling with haunting questions of grief and forgiveness, identity and loyalty, politics and love.

Tris’s initiation day should have been marked by celebration and victory with her chosen faction; instead, the day ended with unspeakable horrors. War now looms as conflict between the factions and their ideologies grows. And in times of war, sides must be chosen, secrets will emerge, and choices will become even more irrevocable—and even more powerful. Transformed by her own decisions but also by haunting grief and guilt, radical new discoveries, and shifting relationships, Tris must fully embrace her Divergence, even if she does not know what she may lose by doing so.

So this book pretty much starts where Divergent left off: mainly that shmat hit the fan within the Dauntless, Erudite, and Abnegation factions. Candor and Amity are hardly untouched by the problems faced in the previous book, and it is in Insurgent where we see how all five factions work with respect to the greater world at hand. Oh, and lots of guilt-ridden angst.

Frankly, the angst alone could have driven anyone up the wall and back and this book could easily be ripped to shreds over how annoyingly gloomy characters are. The mushy mushiness of the main characters in the beginning of the book could have further broken the book for me, too.

But the angst and romance worked in this situation. Tris went through a lot of identity crises moments during Divergent, and in the end of that book, she finds herself shooting one of her best friends (MY HEART IS STILL BROKEN BY THIS BY THE WAY). This sends her on the most epic guilt trip ever. I say epic because throughout Insurgent Tris is suffering the consequences of her Dauntless-perpetuated actions of shooting first and asking questions later, which further sends her spiraling downward in her search for faction identity and self-worth. It doesn’t help that the people she’s consorting with consist of Divergents, those who’ve betrayed their factions but remain loyal to faction standards, and those factionless looking to overthrow a faction-driven government. If I were in her shoes, I’d go out of my mind with angst, too.

Then there’s Four to deal with on a regular basis, and a lot of the romance they’d developed in the first book are shaken by trust issues in the sequel. This will-they-won’t-they attitude would have sent me down the eye-rolling path had it not been for their constant discussions about their damn feelings. Admittedly, the banter was fun in that respect (drugged-out Tris was pretty damn hilarious), and some of their arguments were much needed considering the shmat they went through in Divergent and the shmat they went through in Insurgent. I mean, Tris has a lot of issues about her having killed someone she cared about, and Four himself is having a hard time coming to terms with the possibility of losing people he cares about. Which is probably why I still ship them, and why I still adore Four. Also, I actually appreciated much of the snogging going on here. No shame.

Which brings me to my favorite part of Insurgent: character development. There was a lot of that happening here, even amongst the action and downtime exposition. I saw recurring characters get more limelight, found many of them so endearing that their tragedies became as heartbreaking as Tris’ predicament. The book handled grief and guilt really well, and the factions were fleshed out in their ways of living. Tris, in my opinion, had the best development of them all. She’d seriously gone from that girl with no sense of self, that girl with no regard for her life, to a girl who eventually finds her footing, enough that she begins to value her own survival. I admire that change, and it’s probably why I have such high regard for Tris by the end of book 2.

4.5 out of 5 cookies! I couldn’t help knock down half a cookie because of the darn cliffhanger ending. They’re the worst.

Extra note: Because I loved this book quite a bit, I don’t think I can bring myself to watch the movie. From what I heard, there is a lot of glossing over on the angst, and there’s no Uriah! 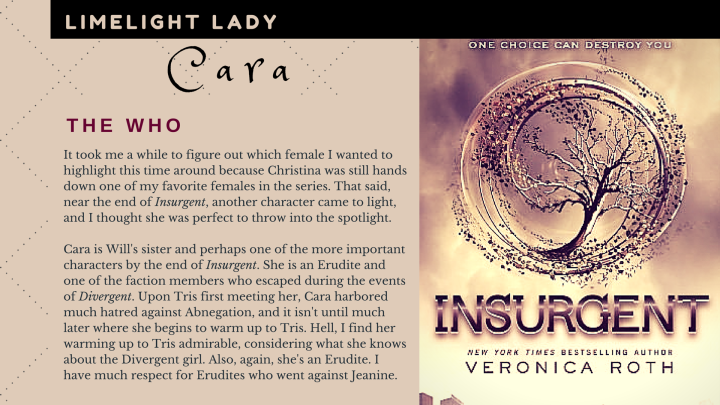