I have mixed feelings about YA urban fantasy and the faerie. Always have. It’s probably why when I read Holly Black’s Tithe I wasn’t falling head over heels in love over it. But I’ve also just thought about the fact that, at the end of it all, I actually liked Tithe, even when I thought most of the mortal–or, erm, in Kaye’s case, half-fae–characters annoyed me (though in Kaye’s case, I came to respect her by the end of the book). Also, Roiben (who’s the male faery equivalent of Ash in this case) was pretty cool.

Warning: This review is pretty much a rant. With words that go past a “mild swearing” rating. Though I offer no apology, I should at least let you know. Don’t read if you’re squeamish against expletives and full-blown ranting! 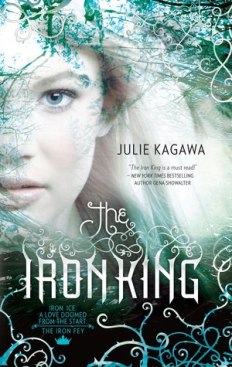 Meghan Chase has a secret destiny; one she could never have imagined.

Something has always felt slightly off in Meghan’s life, ever since her father disappeared before her eyes when she was six. She has never quite fit in at school or at home.

When a dark stranger begins watching her from afar, and her prankster best friend becomes strangely protective of her, Meghan senses that everything she’s known is about to change.

But she could never have guessed the truth – that she is the daughter of a mythical faery king and is a pawn in a deadly war. Now Meghan will learn just how far she’ll go to save someone she cares about, to stop a mysterious evil, no faery creature dare face; and to find love with a young prince who might rather see her dead than let her touch his icy heart.

I love the world of the Fae, and I love seeing it in fiction. When I finally picked The Iron King up, I was a little wary over the reviews. People either loved it or hated it and from what my friend had said about the book, it was something I might not be interested in reading at all.

Still, it’s the Fae, dammit. And they’re meant to be read about. And I had the hope that the book would surprise me.

The obstacle came in the form of Meghan Chase, the main character. I am aware that there is room for growth, especially when this youngster is sixteen and pretty much clueless to everything that goes on around her. She’s a normal teenager with normal teenage problems, even though Meghan herself seems to think she’s NOT a normal teen. She’s awkward, wiry, tomboyish. Basically a teenage girl with low self-esteem and isn’t exactly noticeable as far as the high school hierarchy goes.

She is, of course, correct. She’s not a normal teen. Turns out she’s half-fae. Huh. Well, that’s cool, right?

Only about as cool as somebody’s ice cream dropping and melting on a sidewalk. In the sweltering summer heat. I’ll elaborate further.

(-1) She doesn’t look past petty issues. A lot of the beginning is Meghan in denial, Meghan caring only about herself, Meghan resenting her mother, her stepfather, her astute younger brother. When she finally does find out she has some innate talent in seeing the Fae, she backs away and tries to deny it. She denies it when she sees the changeling. She denies it when Puck tells her. She denies it even when Oberon, the motherfucking King of the Summer Fae, tells her. And when she finally does realize she’s something more special than a normal teenager, all she wants is to go back home to her normal life. She has every advantage of a Fae with the added immunity to iron because of her human blood, and the minute she walks into the Nevernever, she’s all:

Meanwhile, if I’m walking into the world of the Fae, I’d be all:

(-1) She lacks gumption. For a half-fae with untapped potential, she’s not using any of it at all. The story would not have even progressed if Puck hadn’t told her that her brother was kidnapped, because Meghan wouldn’t have tried to look at the wrongness that was the changeling.

(-1) She has no interest in curing her ignorance. There are many instances where if Meghan only bothered to learn about her surroundings and the people in those surroundings, she could have avoided the shitstorm that she got into. Numerous characters in the book warn her about thanking Fae and making deals with them. Does she listen to these warnings? Nope. There was one instance where Grimalkin tells her to be careful with Faery fruit, and Meghan still eats it and doesn’t stop to think maybe it’s a bad idea to keep having more. The worst part about this scene was that nobody even blamed this idiot for her actions. The characters scratched it off as somebody else’s fault and coddled the goddamn heroine. No, seriously. They fucken put her to bed, held her hand and everything.

(-1) She has a sucky sense of self-preservation. For all that this girl works on a farm, has some sort of Faery sight, and a few other skills that are vaguely mentioned, she has no survival skill. Time and time again somebody is saving her ass from getting mauled by a beast coming at her. She’s a deer in the damn headlights, practically a Damsel in Distress, and this goes on and on and on throughout the whole book. I keep hoping she’ll eventually save herself, but then nope, 250-something pages later, one of her Knights in Faery Armor sacrifices himself to save her ass. AGAIN.

(-1) She has a superficial view of her love life. Oh, of course she’s going to crush on the hottest boy in her high school. Nevermind he comes off as a ginormous douchebag bully from the getgo. Yet Meghan doesn’t seem to learn her lesson that beauty is not only skin deep. Enter Prince Ash, and suddenly Meghan can’t get enough of this “devastatingly handsome” Prince of the Winter Court. Even when the first thing he does is try to kill her best friend–and her. I could have forgiven this fatal attraction and chalked it up to hormones–and well, eye-candy, duh–but even I have a limit. That limit comes along the lines of the hottie telling me he’s going to kill me next time we met. Um. No thanks.

Meanwhile there’s a perfectly awesome–yet friendzoned–character in Puck that makes me think of Ducky in Pretty in Pink. Nevermind that I’m not altogether happy about THE Robin Goodfellow being reduced to a potential, smouldery love interest, but that’s besides the point.

So if I was rating Meghan Chase as a character on a 1-5 rating, she pretty much fails altogether.

As Far As The Rest Of The Book Goes…

It was hard to enjoy much of the book because the main character ruins things, and the story is largely character-driven. I mean, I can say I got excited over the image of the Winter and Summer Courts. I did find it amusing that one of the faery portals was found beneath a dance club. I didn’t actually mind Ash as a character, because he’s a Winter Fae, and I expected him to act like a self-entitled ass. He has redeeming qualities, I suppose, but I would have probably liked him even more if he’d been a villain throughout. For all that I whined about Puck being given such a demeaning role (I mean he’s the TRICKSTER FAE for chrissakes), I liked him. Frankly, the love interests deserve better than the main character.

Can I just get Grimalkin as the main character? Best. Character. Ever.

2 out of 5 cookies! Honestly, the only reason why I didn’t rate this any lower was because I actually bothered to finish it.

5 thoughts on “Review: The Iron King by Julie Kagawa”