So this book. I don’t even know where to start that will keep you safe from my abject admiration of A Darker Shade of Magic. And the squeefesting that will follow. And um. Yeah.

Screw it, can I just say I love this book and be done with it already? I cannot.

A DARKER SHADE OF MAGIC

Audiobook courtesy of the Ford Audiobook Club on Goodreads. 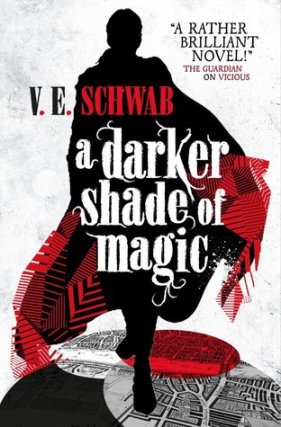 Kell is one of the last Travelers—rare magicians who choose a parallel universe to visit.

Grey London is dirty, boring, lacks magic, ruled by mad King George. Red London is where life and magic are revered, and the Maresh Dynasty presides over a flourishing empire. White London is ruled by whoever has murdered their way to the throne. People fight to control magic, and the magic fights back, draining the city to its very bones. Once there was Black London—but no one speaks of that now.

Officially, Kell is the Red Traveler, personal ambassador and adopted Prince of Red London, carrying the monthly correspondences between royals of each London. Unofficially, Kell smuggles for those willing to pay for even a glimpse of a world they’ll never see. This dangerous hobby sets him up for accidental treason. Fleeing into Grey London, Kell runs afoul of Delilah Bard, a cut-purse with lofty aspirations. She robs him, saves him from a dangerous enemy, then forces him to another world for her ‘proper adventure’.

But perilous magic is afoot, and treachery lurks at every turn. To save all of the worlds, Kell and Lila will first need to stay alive—trickier than they hoped.

So there’s this book I’d read a while back called Night Circus by Erin Morgenstern. (You wonder why I bring this up, but I promise there’s a point to this rumination!) It was a beautifully written novel, about magic and circuses and competitions and a love story that spanned an age. The descriptions were exquisite, the setting was vivid, and I could swear I was walking down the Ice Garden with the cast of characters.

The book, however, didn’t do it for me as far as the story went. It was missing strong characters, felt disjointed for the most part, and didn’t really have a plot I was interested in reading about (or listening to). So while I adored the setting and the description–and the audiobook narration–I wasn’t utterly wowed. Still, it was a good book.

A Darker Shade of Magic, however, has all the bits that I loved about Night Circus mixed in with a wondrous world where magic is alive.

Firstly, those covers. They just look awesome, that’s what. I loved the UK cover the best, though the US version was also rather splendid. I’m trying to figure out how I can Food and Fandomize this book, but right now my brain is mostly going to the color schemes and I’d need to find a way to make gray food….OMG I CAN MAKE A PARFAIT. YES. Hem, hem, anyway, the covers were most excellent. 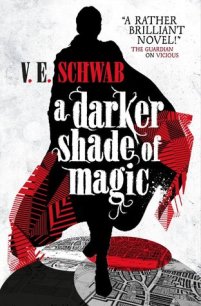 A London in different shades. How could anyone not love being able to travel to four (well, three since Black London is pretty much just closed off) different Londons? I loved the world building and the detail put into distinguishing the Londons from each other. Listening to Steven Crossley’s narration of the book helped me imagine the places rather well, though often I did wish I had a paperback copy so I could actually read along, ’cause the descriptions were fantastic.

Delilah Bard. I admit, it took some time getting used to Lila. I think I’ve had my fill of pirates after overplaying Assassin’s Creed IV: Black Flag so her whole dreaming of being a pirate and having adventures just made me grimace and groan somewhat. That said, I gave her a chance because this sassy thief knows how to set bitches on fire. She also has no problem using a pistol. You just don’t frell with that.

Magic and Mayhem and Antari. I loved the Antari and the magic they wield. Magic has the potential to control is such a creepy concept and there are a cast of characters in the book that show us magical control in varying degrees. Kell and Holland, particularly, wield and view magic differently from each other, even though they are both Antari, and to be honest, I’m not particularly sure which one of their views I agreed with more. Which makes the notion of magic in the book even better, imo. (That said, I’d probably side with Kell because I’m kind of in love with him–though I do feel sorry for Holland).

Those motherfrelling twins. There’s nothing like a great villain to add conflict to the story. ADSoM has two: Athos and Astrid Dane. Well, three, if you count the darkness of Black London magic (though I feel this third is sidelined mostly and will re-emerge in the sequel). But the twins more than cut great figures across White London and its neighbors. Together, Athos and Astrid are two heads of the same coin in cruelty and power. Apart, they have their own sense of batshit crazy. I outwardly shivered when Crossley tried to convey their voice and description in his narration.

That literal bromance though! It’s real! It’s really, really REAL! Rhy and Kell make an awesome duo, so I was slightly sad that there wasn’t much Rhy-ness in the pages. Kell is absolutely dedicated to Rhy in his own brotherly way, which made me admire him even more later on in the book. I mean, I don’t blame Kell. Rhy’s pretty damn hilarious, albeit unskilled in the arts of magic.

5 out of 5 cookies! It was seriously hard to stop listening to the audiobook. I spent many nights going “one more chapter and I’ll sleep” and finding myself awake a couple of hours later STILL listening to the story.

9 thoughts on “Review: A Darker Shade of Magic by V.E. Schwab”