Did I just really read this entire book without taking my usual copious amount of notes? Yes. Yes, I did.

DAMN YOU AGAIN, SANDERSON. You sucked me in again. Like an Epic whose power is essentially creating black holes.

I wonder if there’ll be an Epic like that in the later books…goodness now that little shmat will be OP BROKEN.

Then again, so was Steelheart.

Ten years ago, Calamity came. It was a burst in the sky that gave ordinary men and women extraordinary powers. The awed public started calling them Epics. But Epics are no friend of man. With incredible gifts came the desire to rule. And to rule man you must crush his wills.

Nobody fights the Epics…nobody but the Reckoners. A shadowy group of ordinary humans, they spend their lives studying Epics, finding their weaknesses, and then assassinating them.

And David wants in. He wants Steelheart – the Epic who is said to be invincible. The Epic who killed David’s father. For years, like the Reckoners, David’s been studying, and planning – and he has something they need. Not an object, but an experience.

So I totally read this because Sanderson and superheroes. Then Steelheart came along, and I was all: “WHY U EVIL SUPERMAN?”

But obviously I knew this because I read the book jacket summary. It didn’t prevent the fact that I was still a wee bit hurt that something as iconic-sounding as Steelheart would go in the way of Superman in Injustice: Gods Among Us. It also smarted a wee bit that every single Epic got lumped into the “power corrupts” generalization, and only very late on do we see that there will always be exceptions to these kinds of things. 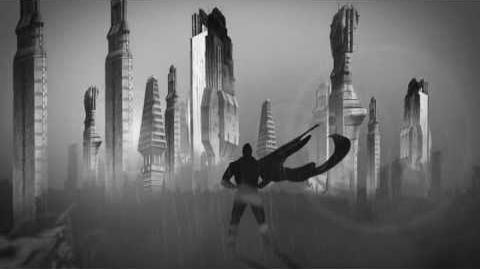 The world. It was bleak. And in the case of Newcago, super-dark and super-metallic. Nightwielder controls the darkness so there’s no sun coming into the city. Steelheart pretty much runs the area as an undefeated tyrant, helped by powerful High Epics such as Firefight, Conflux, and Nightwielder. The only people really getting much in the way of affluence are the Epics and those with the skills the Epics need. For everyone else, there’s the understreets, levels of steel underground where the unfortunate make ends meet without trying to raise the ire of the powerful demons above. Talk about a promising place, this Newcago.

But even in bleak prospects there will always be a group of revolutionaries finding ways to strike at the establishment, am I right?

The Reckoners are awesome. It’s no surprise David wants to join them from the getgo. I mean, obviously the group is a way for David to exact revenge upon the super-villain who murdered his father ten years back, but upon meeting them, revenge is only one aspect of his attempt to befriend and join the Reckoners. Because Mistborn had been my first entry into Sanderson’s works, the team dynamic between Abraham, Tia, David, Cody, Megan, and the Prof reminded me of the group of Allomancers and non-Allomancers working together to destroy a tyrant–only in this case, Steelheart happens to be the Reckoners’ Lord Ruler. All of the Reckoners are certainly their very own kind of badass, and each pretty much holds an important role within the team.

Megan entered and I followed on her heels, staring at the walls and their wares.

“Sure. You know, how bananas grow from their trees and hang down and stuff?”

“Knees, you suck at metaphors.”

Then there’s David. Lots of things can be said about this vengeful 18-year-old. He’s a geek to the max. With sucky usage of metaphors (although in his defense, his comparing motorcycles to “ninja alligators” gave me such a vivid picture of the things that I laughed quite a bit). Which is fantastic, because that made me love him as a character. And considering he’s the POV in this book, it made for a more enjoyable storytelling journey.

Megan walked past me and I raised a finger to point at the motorcycles.

His “talent” for conversation is certainly one of my favorite aspects about David, but his knack for wild improvisations definitely takes the cake. It’s almost as awesome as watching Phaedrus in action (and boy…the shit the Prof pulls is even more squee-inducing by the end of the book).

Tia nodded. “Why didn’t you lump the mental illusionists with the photon-manipulators?”

“I like to make groupings based on limitations,” I said, getting out my index and flipping to a specific page for her. Epics with illusion powers fell into two groups. Some created actual changes in the way light behaved, crafting illusions with photons themselves. Others made illusions by affecting the brains of the people around them. They really created hallucinations, not true illusions.

On top of that, the “science” of this world is just as heavily detailed as Allomancy had been in Mistborn. There’s a friggin’ classification for Epics, and both Tia and David go into a degree of detail discussing this at some point. For some readers, talks about plans and Epics’ weaknesses could get slow real fast (heh), but after being used to such conversation happening in Mistborn, it hardly gave me pause to complain. Steelheart was, after all, a bit of a deviation from the high fantasy–it is YA, it is more scifi than fantasy, and it definitely has a few hundred pages less than what I had come to expect a Sanderson novel would have.

But if these squeeful things in the book are not enough to make Steelheart super-epic, the action sequences definitely pull through. A while back, one of my friends (a big fan of Sanderson’s stuff) had described Sanderson’s endings as being packed full of “WTF”-ery. It could be the last fifty or so pages of a book, and something will ALWAYS happen that will make your eyes bulge and screw with your emotional stability. Don’t even get me started on how things ended for this book. It really is a lot of “WTF”-ery.