You know you’ve got only yourself to blame when you pick up a book that’s about a chef going on a chef-y journey. ‘Cause, you know, FOOD. And, um. Yeah, descriptions of food. Lots of food.

I’m also writing this review when I’ve yet to eat after spending eleven hours working at school. So you can imagine how famished I am at the moment.

I don’t know why I do this to myself. 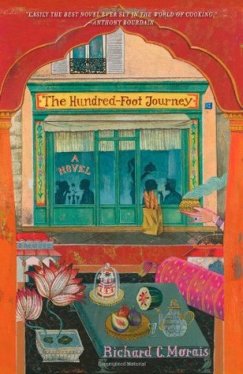 Born above his grandfather’s modest restaurant in Mumbai, Hassan first experienced life through intoxicating whiffs of spicy fish curry, trips to the local markets, and gourmet outings with his mother. But when tragedy pushes the family out of India, they console themselves by eating their way around the world, eventually settling in Lumière, a small village in the French Alps.

The boisterous Haji family takes Lumière by storm. They open an inexpensive Indian restaurant opposite an esteemed French relais—that of the famous chef Madame Mallory—and infuse the sleepy town with the spices of India, transforming the lives of its eccentric villagers and infuriating their celebrated neighbor. Only after Madame Mallory wages culinary war with the immigrant family, does she finally agree to mentor young Hassan, leading him to Paris, the launch of his own restaurant, and a slew of new adventures.

If I close my eyes I can picture our old kitchen now, smell the clove and bay leaf, hear the spitting of the kadai. Bappu’s gas rings and tawa grills were off to the left as you entered, and you’d often see him sipping his milky tea, the four basic masalas of Indian cooking bubbling away under his watchful eye…Only these northerners–my grandmother decided–had the right feel for tandoori, the deep coal pots from which emerged toasted skewers of marinated eggplant and chicken and green peppers with prawns.

This book was descriptive about food as hell. Like, seriously, the first few chapters went straight into Hassan’s destiny to being a cook, and as a reader, I was immersed into a world of Indian cooking. As a person who likes her spice, this was awesome (and not so awesome, because I got hungry soon after). Eventually the character’s family started traveling all over Europe, having a taste of every single cuisine, and I was positively drooling.

So, we ate mussels and beer in Belgium bars, roast goat with red cabbage in a dark German stube. There was a meaty dinner of venison in Austria; polenta in the Dolomites, white whine and Felchen, a bony lake fish, in Switzerland.

Waves of Tuscan food soon broke over the table as a nighttime musk of lavender and sage and citrus wafted over us from a border of terra-cotta pots. We ate wild asparagus served with fagiole, fat slabs of beef perfectly charbroiled on wood fires, walnut biscotti dunked in the patron’s own Vin Santo. And laughter, once again laughter. Heaven on earth, no?

They go through to Tuscany and the majority of Italian cuisine, up until eventually the family hits France, where they eventually settle down in Lumiere to make ends meet. And the story eventually starts getting past a bit of the food and to actual human dramatics (not that it wasn’t dramatic before, but honestly, the story was a little glazed over in the plot department).

But mainly I just wanted to eat a lot during the reading of this book.

Because as a chef with “perfect pitch” when it comes to taste, Hassan was all:

No joke. There was no end to it. Whether Indian cuisine or–eventually–French cuisine, he kept a pretty busy kitchen.

Then, of course, in comes Madame Mallory, perhaps my favorite character ever. The food kept me reading, but it was Madame Mallory and her crazy antics (as well as Hassan’s father) that held my interest. At some point in the story she has a mental breakdown because Hassan’s food was perfectly flavored, and I practically chortled as I read, because this bitch almost never lost her composure. It’s a pity this scene doesn’t play out as dramatically in the movie–which I’d watched a day or two after finishing the book. I would have loved to see Dame Helen Mirren freak the eff out.

It did get sort of close when Hassan made her an omelette in the movie, but eh. Not close enough.

Unfortunately, the whole book didn’t end at Madame Mallory. There’s the whole section in Paris that I just wasn’t as interested in reading. I thought the best parts had gone, and though I did like the touch at the end with the Michelin star, I felt most of the last chapters were disjointed and almost detached. I didn’t feel the “food culture” as much as I did before. Honestly, I thought the ending of the movie took things back to basics, which I liked better (granted, I thought the movie completely lost much of the book’s beginning essence).

3 out of 5 stars! Stay for the food, at least. That was delicious to the eyes.

It's been a while since I've had to finish a short story on a deadline...and I'm off to get some inspiration! (And mochi donuts...and bubble tea...)
Food and fandom preview! I made some alterations with the recipe, but this came out really well! Wished I had actual cardamom though. #semla #fjerda #sixofcrows #foodandfiction #foodandfandom #leighbardugo #badassbaking