Shameless self-confession: When I bought this book, every intention was to give this away for my TBTBSanta. I wasn’t going to read it or anything, since I had planned on reading Rowell’s Fangirl first. And if I’d liked that book, then I’d go ahead and read Carry On. All the same, at the first look of the cover, I’d narrowed my eyes (it’s a rather lovely cover, btw), then read the book jacket summary.

And almost said out loud–in the open, in The Frelling Strand–“WAIT. IS THIS ABOUT GAY WIZARDS. LIKE HARRY POTTER AND DRACO MALFOY FANFICTION?!”

By that point, I was foaming at the mouth and bought the book with EVERY INTENTION OF READING IT. Before I send it away to my TBTBSanta, of course.

Simon Snow is the worst chosen one who’s ever been chosen.

That’s what his roommate, Baz, says. And Baz might be evil and a vampire and a complete git, but he’s probably right.

Half the time, Simon can’t even make his wand work, and the other half, he sets something on fire. His mentor’s avoiding him, his girlfriend broke up with him, and there’s a magic-eating monster running around wearing Simon’s face. Baz would be having a field day with all this, if he were here–it’s their last year at Watford School of Magicks, and Simon’s infuriating nemesis didn’t even bother to show up.

Carry On is a ghost story, a love story, a mystery and a melodrama. It has just as much kissing and talking as you’d expect from a Rainbow Rowell story–but far, far more monsters.

This is my first Rainbow Rowell story. People probably know this author because of how big Eleanor and Park got. Or maybe even from Fangirl. I’ve seen both books get pretty good reviews on the blogosphere (and my best friend loved EaP), and Fangirl is certainly on my TBR list, just because, honestly, how could I NOT have it on my TBR list?

What ultimately made me decide to start on a Rainbow Rowell journey, first and foremost, is that Carry On is her first fantasy. And frankly, fantasy is what I’m comfortable with.

I think I fell in love with Baz even before he finally showed himself–quite ostentatiously–in the second part of the book. I think I fell in love with this story even knowing that it began like every wizarding school trope out there (with a focus on the Harry Potter character dynamic). Then it started teetering in the ridiculously dramatic, and all my expectations got turned around by the characters going out of their typical trope-embodiments.

The Chosen One has no idea what he’s doing. His best friend and sidekick is female and has no interest in snogging him whatsoever. His girlfriend’s completely a dud (IMO, easily my least favorite character ever), but that’s okay, because it turns out he’s kind of gay for his roommate. His roommate’s not altogether evil, but Dumbledore totally is.

That’s the kind of shit that can go down hard. Real fast. Real epically.

And lawdy. So. Much. DRAMA.

I loved every single bit of it. Especially the snogging. (Page 343, I’m talking to you!)

But let’s pretend I’m being objective about this book. Let’s pretend I’m being overly critical. Overly-critical!Mari would probably say that the plot–what there is of one–is absolutely convoluted and a mess. She would even say there wasn’t much of a plot at all. There was conflict and resolution, yes. But it was a downright mess, almost as much as the relationships were by the middle of the book.

On the other hand, hot damn. Rainbow Rowell can write. I didn’t even CARE that the plot was hard to follow, because I didn’t CARE about any of the plot (as far as the overall one, anyway). I just wanted to live along with Simon and Baz and Penelope on their final year at Watford. I wanted to be there when Baz talked down a dragon with a fucking nursery rhyme (and Simon’s help), wanted to be there when Natasha Grimm-Pitch went all “NOT MY SON YOU BITCH” on the vampires (okay, so that was when Baz was five, but whatever). There was a charm to this book, and most of it was because Rowell’s characters were so very much alive for me.

But I loved it the way it was.

5 out of 5 cookies! I almost want to keep this copy of the book and send my TBTBSanta something else completely… 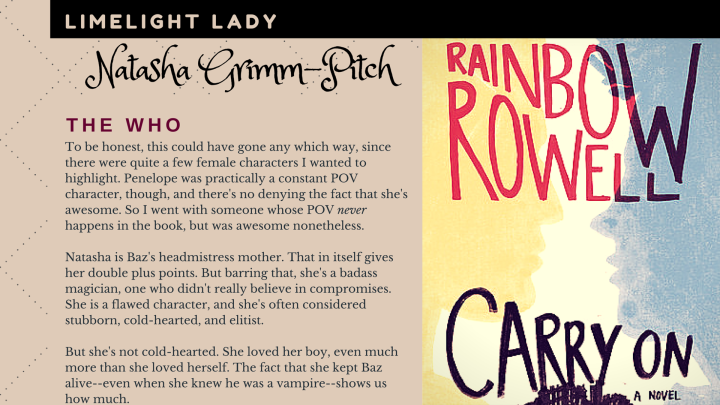 14 thoughts on “Review: Carry On by Rainbow Rowell”