You laugh at this. They laughed at this. And then they realized I was giving them a Reese’s piece for every time they listed down a simile or metaphor in T-Swizzle’s song. Oh, they got their super game faces on once “Loving him was like driving a new Maserati down a dead end street” clued them in on the amount of figurative language used in “Red.” Ohhhh yes. TRAPPED. TRAPPED I TELL YA.

Hem hem. Anyway, my prompts for the day: 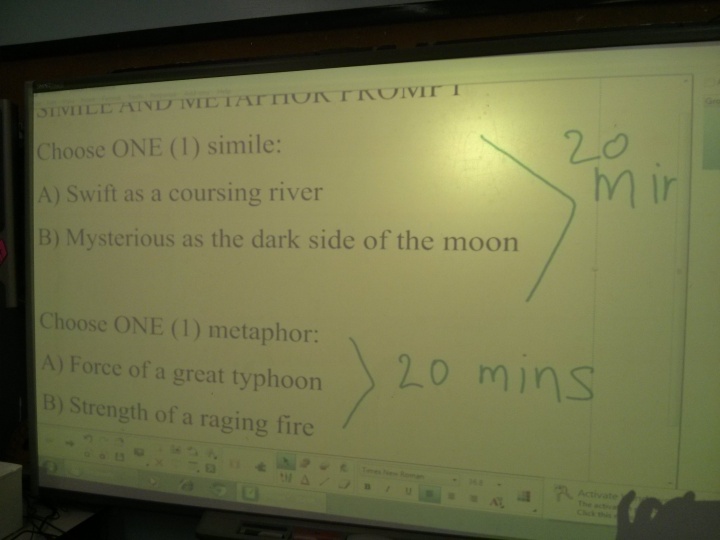 So. Yeah. I told them to let the simile and metaphor inspire them. One fifth grader wrote two poems. One eighth grader wrote me THREE stories, that overachiever. I’m kind of proud of them.

Also, I think I found my short story idea for a dieselpunk fairy tale retelling. XD

Mysterious as the dark side of the moon.

He wasn’t the typical kind of client that came to her door. Not that many did. It was difficult to find her office in the middle of the city, in a typically residential street, wedged between two seedy buildings that fought each other constantly for attention. Cat and Dog, most people called them.

No one ever named her building. People mostly forgot it existed.

Not this guy, though. This one went straight to the door, buzzed, and asked for her by name. No flinching, no jokes. This guy was strictly business.

“Last thing she did was go to a bar. Girl’s night out, see. I…I know this king of thing is frowned upon, but I trusted her. She wouldn’t just go missing. Not with anyone she’s met at a bar.”

She sighed. “Sir, I don’t do cases like these.”

“I’m not the only one.” Here he pulled at his briefcase, opened it. “She’s the fifth woman gone from the same area. These are testimonials.”

She looked at him. Stared like an owl contemplating on snatching its prey. “Why me and not the cops then?”

“Because they won’t listen to me. Not when Eric Bluebeard’s involved.”

To be honest, I hadn’t thought of names. One of my eighth graders came up with Eric for me. The Bluebeard is clearly homage and foreshadowing 😉

One thought on “Writing Wednesdays #2: Similes and Metaphors”