Of course it’d be me who ends up with a romance prompt. Leave it to my writing voldies to drag a kissing story out of me. And then make me end it in a TRAGEDY.

I’m getting way too ahead of myself, though. 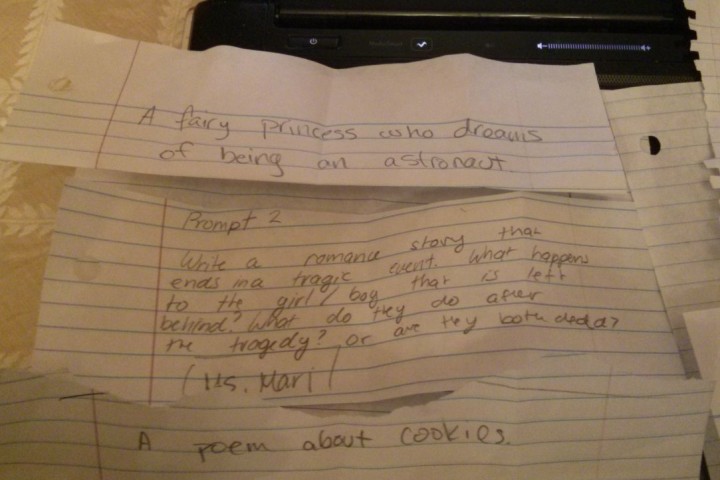 This week, I had the writing voldies think up different prompts, which would then be thrown into a hat (or, in my case, a basket), and then they would randomly grab a prompt written by either themselves or by someone else. To keep it interesting (since I have no idea whether their prompts would be vague, obscene, or uninspiring), I added some of my own.

Amusingly enough, a bunch of my own prompts got picked out of the basket, and I was right glad that one of my voldies had to do a poem about cookies. Right. Glad.

Anyway, I ended up with one of my eighth grader’s prompts. And I spent a great deal of time telling her how much I hated her for having me write a bad romance. With a tragic ending. 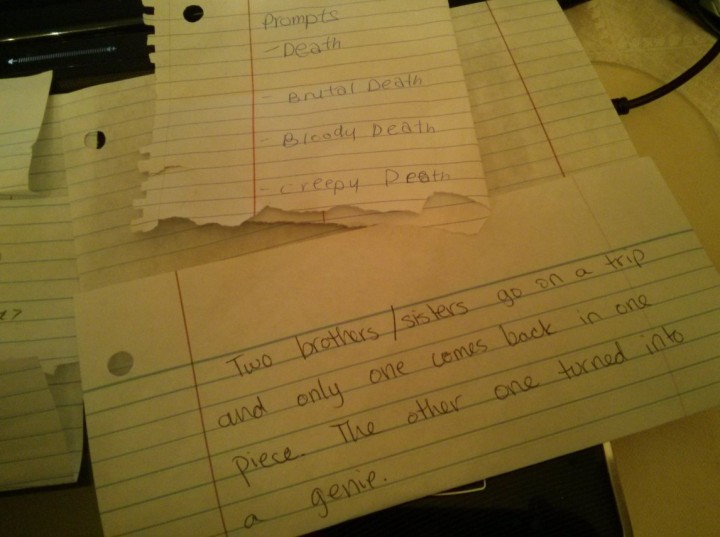 Write a romance story that ends in a tragic event. What happens to the girl/boy that is left behind? What do they do after the tragedy? Or are they both dead?

“Better return that,” the knight warned, her dark eyes narrowed into dangerous slits. “I can see your scrawny shadow from all the way over here.”

The thief chuckled. “I should be flattered to be watched by you of all people.”

The knight grunted. “It’s my job, you cretin. Put it back.”

The “it” in question had been a priceless heirloom handed down from one Mage King to another. Strangely enough, while the artifact itself–a ring of potentially combustive power–had tons of magic, it couldn’t be protected by magic. Which explained why Cala was stuck guarding the Ring while the rest of her mates were at the new queen’s coronation.

How could she even explain what San was thinking?

“I trust none but the Queen’s Champion, Cala, you know that.”

Sure, Cala had seen the logic to that. The problem with guarding the most sought-after relic in the kingdom was that many thieves would test the waters and attempt a theft in the middle of the coronation. Guards would be too focused on the new Queen San, and rightly so.

The Ring was too tempting, though. Not even the most notorious thief could stop himself from its attempted pilfering.

Cala could take on any thief. She knew the one standing before her, much more than she knew the queen. And Cala knew this thief’s weakness.

She knew it because it was her weakness, too. Sort of.

Corvin complied, taking the lady kngiht into his arms and placing a gentle kiss on her nose before crushing his lips onto hers.

Breathless didn’t even cut it. She was definitely in trouble.

Cala was no delicate flower. Yet she couldn’t stop her tears. She pulled him down again for another kiss. She didn’t want it all to end. It would, though. It had to. She could feel the blood oath tugging at her, compelling her to do what she did not want to do.

The blade went through, silencing Corvin before anything else could be said.

Cala watched her lover slowly fall, and she looked at the Ring. The Mage Ring that needed protecting.

Damn the magic from preventing her to take her own life.

She looked at the ring again and shifted her stance. She could hear another thief coming.

It would be a long night ahead.

On a lighter note, the same eighth grader ended up with my “fairy princess wants to be an astronaut” prompt, and she totally drew the fairy princess character!

I cannot with my writing voldies sometimes.