Thank you, Nova at Confessions of a Literary Addict for this cornucopia of freshly fruited tag! I totally love fruits, so I am tickled by the prompts.

1. Strawberries: Name the sweetest book you’ve read. (e.g. sweet in terms of the characters or if the story takes place in a sweet world… etc.) 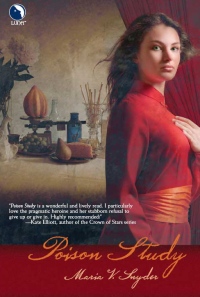 I took this both literally and figuratively. So Poison Study by Maria V. Snyder won out. Not only does the book constantly talks about sweets (the main ones being baked goods and the book’s version of “chocolate”), the budding romance between Yelena and Valek pretty much satisfies my sweet tooth.

2. Coconut: What is a book that you would bring on vacation with you to a tropical destination? (Or if you’re just relaxing at the beach…) 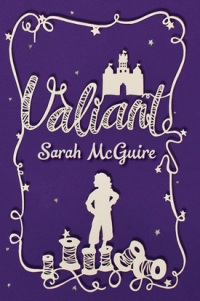 EVERYTHING. Ugh. I wouldn’t know how to answer this question, because I’d honestly just lug my Kindle around, so I have multiple books. Hmm. I’d say Valiant by Sarah McGuire mostly because I’d like to reread it again, and it’s a pretty light read as far as fairy tale retellings go.

3. Pineapple: What is a book that you didn’t think you would like by judging its cover/summary/the first few pages but started to grow on you? 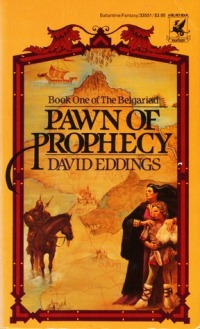 Pawn of Prophecy by David Eddings. Really, the books with the ’80s high fantasy covers make me wary about the content within. I don’t know why, because some of my favorite high fantasy books come from the time period. All the same, it took me AGES to start The Belgariad, and the first book took a lot of time to trudge through before the story got super-awesome.

The Way of Shadows by Brent Weeks. This book was packed with action, political intrigue, romance, and assassins. Some of my favorite elements to throw into a book ever.

5. Watermelon: A watery book (e.g. There wasn’t tons of substance to the book/the details were just too watery…etc. Don’t get us wrong though, we love watermelons!)

Clariel by Garth Nix. Well, it’s not like there wasn’t ANY substance in the book. It was riddled with continual worldbuilding and plot twists, but it was hard to keep track of things when the main character spent most of her time being apathetic about, well, EVERYTHING. Much of the details slid around Clariel, which is unfortunate, because I really wanted to love the book.

Sorcery and Cecelia: or The Enchanted Chocolate Pot by Patricia C. Wrede and Caroline Stevermer. At the time I’d read it, it was one of the first books I’d read that told a story through an exchange of letters. It was fun to read, and you get a great sense of the narrators’ voices just by being immersed into the pages.

7. Lemons: Name a book that made you feel sour. (e.g. The emotions were just sour, you just felt sour reading the book, or the book includes sour characters… etc.)

The Time Traveler’s Wife by Audrey Niffenegger. I must have been halfway through when I DNFed the book because the main character and her friends rubbed me in the wrong, soury way. I also got pretty bored by the romance, but that’s just me.

8. Tomato: What is a wonderful book that you think should be more widely known? Or a fantastic author whom you think deserves more recognition? (Since some may not know that tomatoes are actually fruits!)

Maledicte by Lane Robins. That I saw, Robins has written a few contemporary fantasies and maybe an occasional mystery or two. She also did an urban fantasy series under a pseudonym. The one book I have read from hers, though, is a fantasy revenge story (a duology, looks like) by the name of Maledicte. I had really enjoyed the book’s more risque Count of Monte Cristo feel, and was surprised when it’s not well-known.

9. Apple: Name a really stereotypical book of a certain genre just like apples which are typical fruits. In the end was that book good or not? (e.g. A very typical contemporary/fantasy book… etc.) 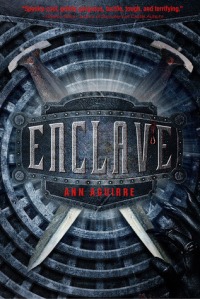 Enclave by Ann Aguirre. This is a YA dystopian zombie apocalypse book. Yeah, say that twenty times fast. There were a number of these that came out around the same time. Unfortunately, I’ve yet to read one I actually liked.

10. Blueberries: Name a book that made you feel blue. (Any sad, depressing books that you’ve read?) 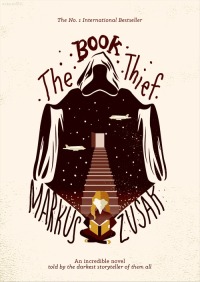 The Book Thief by Markus Zusak. Because omg feels.

11. Grapefruit: Any bitter books? (e.g. a book that was blue but MORE… do you have any bitter resentments towards characters from a book? Any sour turned bitter emotions? Any uber hateful villains?) 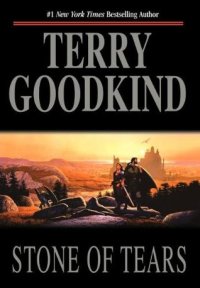 Usually all the villains that are hateful I tend to love to hate as characters, haha. Um. Probably Stone of Tears by Terry Goodkind, because the shit Rahl’s people put women through constantly pissed me off in the book.

12. Jackfruit: Name the most physically heavy book that you’ve ever read. (Because jackfruits are pretty heavy fruits!)

13. Limes: Name a funny book that you’ve read because limes add flavour and so does humour with every book. 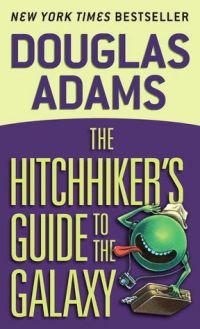 The Hitchhiker’s Guide to the Galaxy by Douglas Adams. Always.

14. Rambutan: Name a book filled with an interesting–and sometimes prickly–band of characters.

Night Watch by Terry Pratchett. Sam Vimes alone makes up for the book’s prickliness, but honestly, the characters in the book were fantastic. And and…revolution raaaaah! 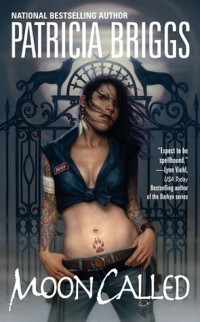 One Way or an Author

Now I have a craving for fruits. Thankfully we have tangerines at home. Om nom nom.

2 thoughts on “Of Fruits and Keeping it Fresh Tags”