Nothing like getting out of a reading slump than by reading a terribly good book. And I could be biased here, seeing as I’ve loved the previous Study books so far. Part of my bias definitely carried over to this “end” of a trilogy. (And it’s not really an end, considering Yelena’s story continues in the Soulfinder series, which is definitely on my to-read list now).

Make note: Possible spoilers, considering this is the third of a series. 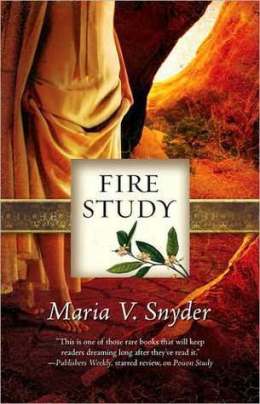 The apprenticeship is over—now the real test has begun.

When word that Yelena is a Soulfinder—able to capture and release souls—spreads like wildfire, people grow uneasy. Already Yelena’s unusual abilities and past have set her apart. As the Council debates Yelena’s fate, she receives a disturbing message: a plot is rising against her homeland, led by a murderous sorcerer she has defeated before…

Honor sets Yelena on a path that will test the limits of her skills, and the hope of reuniting with her beloved spurs her onward. Her journey is fraught with allies, enemies, lovers and would-be assassins, each of questionable loyalty. Yelena will have but one chance to prove herself—and save the land she holds dear.

“No,” Leif said, “The inn will get too cold and Mrs. Floranne won’t have hot coals for breakfast.”

“Leif, do you always think with your stomach?” I asked.

“Is there any other way?”

Leif as a constant companion. In the last book, I kind of couldn’t bring myself to like Leif even when he is Yelena’s brother. Mostly because he was trying to kill her half the time, but then again, that’s not much of a justification, considering I warmed to Valek really quickly, and he must have tried to kill Yelena a couple times in Poison Study (that said, he’s saved Yelena several times over when she was busy saving everyone else XD). Leif comes around, though, and he is highly entertaining to read about. I love that he can hold his own for most of the adventure. And, most importantly, he makes me laugh.

I mentally added soothing-the-dead-Sandseeds to the end of my long list of things to do. After I dealt with the Fire Warper, which should be a breeze. While I was lying to myself, I included flying and turning stones into gold to my list. Might as well think big.

Yelena’s story voice. She finds her own footing in this book, magically-speaking, and she goes toe-to-toe with a Fire Warper. What is not badass about that? Seriously, though, I love her as a character, and she’s practically my girl-crush of the moment. I love that she often compartmentalized her problems throughout the book, though she eventually does get to a point where she decides that the risk is worth the effort. Also, she faces her fears head-on and–yes, pun intended–into the fire.

“There are no odds. It’s suicide,” Leif said.

“I feel so much better now.”

Brother and sister squabbling. Actually, I can also go with the Ari and Janco squabbling, too, because they were just as entertaining to read as Leif and Yelena. The siblings are definitely much more alike than they think, and often their witty repartee are what I look forward to in those lulling scenes where the action is yet to happen. Not that there are many of those, but considering they continue to bicker on even amidst great danger, it’s awesome.

The ship in a firestorm that is Yelena and Valek. Why are all of my loves involving characters and their relationship to Yelena? But ugh, seriously, Valek is love. I admit the story felt a bit empty when he wasn’t around, but when it’s clear that he’s around the corner and ready to help Yelena on her crazy adventure, things became all the better! I’m a sucker for romance. I’m a sucker for Yelena and Valek. They’re definitely on my list of ships that can weather many storms. Also, seriously, they’re a fantastic fighting force, she with her reach and flexibility, and he with his…Valek-ness. And the little tender moments they share from time to time? Sigh. Just…utterly sigh.

So. Much. Magic! I love that there’s a lot of different types of magic being showcased in Fire Study, much more so–surprisingly enough–than there was in Magic Study. The fact that there is also a lot of history involved with the magic that Yelena has to work on is fantastic and helps the worldbuilding in the stories. My caveat is that there is a shitton of reliance on the magic system itself, and it did start grating a bit, especially with how overpowering half of the characters are. The Fire Warper and Roze, especially, were constant powerhouses and honestly, I could have done with a little less sparkle and a lot more thought around throwing fireballs and blood magic every other few pages.

A mess of a manhunt. I felt the first half of the book dragged on because most of it was Yelena, Leif, and two other companions hunting for two villains from the previous book. A lot of it could have been taken out and the story would have still remained intact. That’s just me, though. Thankfully Leif and Moon Man kept a bit of brevity, up until some dark things happen (I mean, who can laugh when the Kirakawa blood sacrifices are eventually mentioned?). That said, Yelena really can’t catch a break.

But I suppose in the end she got out of it in grand style.

4.5 out of 5 cookies! I certainly loved the previous two books much more, and Poison Study will always be the undisputed best of the trilogy, but this book was certainly fabulous. 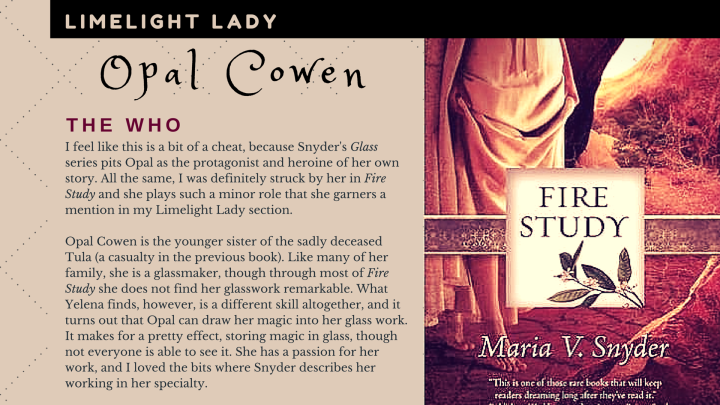