So I have this thing that I do with my little voldies during lunchtime, and it usually revolves around me trying to placate them with a bit of storytelling. I try not to do it too often, but occasionally I relent when all of them turn their little pulchritudinous faces at me and start to chant “Story, story, story Ms. Mari!”

Their favorites are undoubtedly the fairy tale variants, and the fact that they are fascinated by a “robot Cinderella” means I get to recount an abridged version of Marissa Meyer’s Lunar Chronicles books to them–after I finish reading them to myself, of course.

This led me to narrate Scarlet, which brought about this type of speculation: 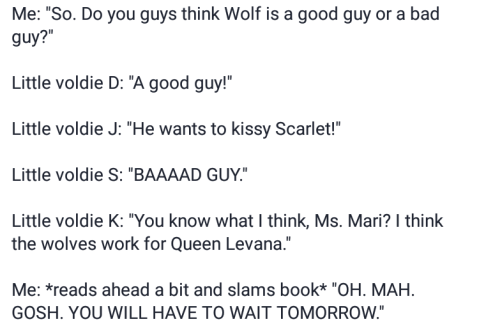 I have pretty precocious four-year-olds, not gonna lie.

Note: Scarlet is the second book of the Lunar Chronicles series, so expect some spoilers from the first book. 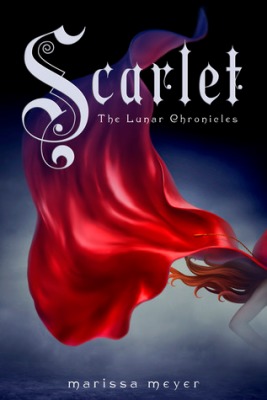 Cinder, the cyborg mechanic, returns in the second thrilling installment of the bestselling Lunar Chronicles. She’s trying to break out of prison—even though if she succeeds, she’ll be the Commonwealth’s most wanted fugitive.

Halfway around the world, Scarlet Benoit’s grandmother is missing. It turns out there are many things Scarlet doesn’t know about her grandmother or the grave danger she has lived in her whole life. When Scarlet encounters Wolf, a street fighter who may have information as to her grandmother’s whereabouts, she is loath to trust this stranger, but is inexplicably drawn to him, and he to her. As Scarlet and Wolf unravel one mystery, they encounter another when they meet Cinder. Now, all of them must stay one step ahead of the vicious Lunar Queen Levana, who will do anything for the handsome Prince Kai to become her husband, her king, her prisoner.

After a long silence of examining the retracting mechanism, the girl wrinkled her nose. “Two counts of treason, if you must know. And resisting arrest, and unlawful use of bioelectricity. Oh, and illegal immigration, but honestly, I think that’s a little excessive.”

Cinder’s story continues. I loved Cinder. I’d have probably rated Cinder at five cookies as well, because I was so entertained by the book I didn’t care how predictable it was. But then that cliffhanger ending happened, and I was mad. MAD AS HELL I TELL YA. All the same, I love Cinder as a character. She’s a mechanic. She’s a cyborg. She’s the long-lost Lunar princess that everyone and their grandmothers are searching Earth for. She’s got a lot more to learn about herself, her powers, and her general feelings to…well…everyone, really, but damn. She carries herself well, and I’ve always loved her sarcasm. At the moment, she’s still my favorite character in the series.

But her grandmother had never suggested she could think the same of Scarlet. You’ll be fine, she always said, after a skinned knee, after a broken arm, after her first youthful heartbreak. You’ll be fine, because you’re strong, like me.

The gun-toting Scarlet takes to the stage. I did find the addition of Scarlet fantastic, since in the long run, she does become part of the overall plot, especially with regards to her grandmother being missing. Scarlet is seen as a farm-girl who is searching for her grandmother, an ex-pilot turned farm owner. At first oblivious to the fact that her grandmother may have kept secrets from her, Scarlet eventually realizes that things are not so simple. Certainly, having Wolf around muddles things, and boy oh boy, do things get super muddled.

“You might be a crazy Lunar, but you’re not evil. As long as you’re using your glamour to help people, and more important, to help me, then there’s nothing to feel guilty about.”

The ever-amazing Carswell Thorne. My notes about the introduction of so many boy POVs pretty much lamented over the fact that there are too many boy POVs and how the hell is a girl to deal with this problem?! Sigh. All the same, Thorne is fantastic. I think I liked him the minute he mentioned being the captain of his own spaceship (which was stolen, I might add, so that kind of makes him a space pirate, lmao). Bitches love spaceships. (I sure do, so yeah, this particular bitch loves spaceships.)

“They’re starting a press conference, to talk about you. Thought you wouldn’t want to miss”–Thorne fanned himself, swooning–“his heavenly, chocolate-brown eyes, and perfectly tousled hair, and–“

See. That shmat just makes half his conversations with Cinder gold. GOLD I tell ya. I enjoyed their escape from New Beijing prison, to be honest. Laughed my pants off, that’s for sure.

Sensation returned to his tongue and Kai threw a thankless smile at Aimery. He then proceeded to do the most disrespectful thing he could think of–he pulled his chair back from his desk and sat down. Tipping back, he folded his hands over his stomach.

Anger sizzled behind Levana’s charcoal eyes until she was almost–briefly–unbeautiful.

And then, of course, there’s Kai. Poor Kai. Stuck between a rock and a hard-edged psychotic Lunar queen, it’s a wonder how he manages to keep a part of himself in tact. Actually, it gets worse for him much later in the story, and I almost find it amusing that I’m most devastated by his decision at the end of the book than I am by the death and devastation that transpires in the novel. Priorities, I have them.

The cutesy patootsey romance. I just…buh. I am not ashamed to be a girl and a romantic, and sometimes I will look at a book and sigh at the romance between two characters. In this case, there’s a number of pairings happening, albeit there are several problems that kind of hinder the relationships from happening too fast and too soon. Cinder and Kai, for one, are worlds apart at the moment, and only the hints in their POVs show that they still hold candles to each other, even when there’s almost no hope that they can be reunited in time. Scarlet and Wolf, on the other hand, pretty much go through an imprinting process (at least Wolf does, ’cause, you know, he’s kind of a wolf-y character…for a reason…yeah), and while this kind of gets in the route of insta-love, I thought it was nicely written. Enough that I didn’t have much of a complaint when they get all lovey-dovey on each other. And I mean, those steamy kisses!

“I don’t see that her being cyborg is relevant.”

Also. That quote. When put in the right context, it is TOTALLY SWOONWORTHY. Buh. Romance. Buuuuuh.

Some of the POVs seemed a bit excessive. Honestly, there was a Levana POV that I just glazed over and didn’t much care about. I suppose it may be a good segue into the next book, and things are looking grimmer than ever for Earth after the events in Scarlet, but with the amount of POVs already in play throughout the story, putting Levana in once to show her take on things was just something I could have done without. On the other hand, it was just one scene amidst an already action-packed book, so a little bit of maniacal reflection may have been needed.

5 out of 5 cookies! There wasn’t much else I wanted to whine about. I loved this book, and I cannot wait to see what Cinder and the Rampion crew are going to be up to in Cress! 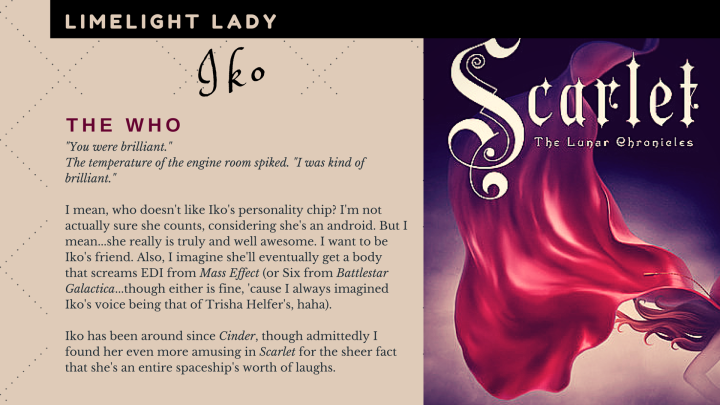 The egg hissed as it slid into the melted butter, its vivid yolk drizzling into the white. Scarlet brushed a tufted feather off the next egg before cracking it open with one hand, simultaneously pushing the spatula across the bottom of the pan. The oozing whites grew opaque, fluffed up, developed a crackling film near the pan’s edges.

That entire chapter with Scarlet making breakfast did make me crave breakfast. Later on, she even cracks open her store of fresh tomatoes so she can serve Wolf some breakfast. Needless to say he gobbled all of it up. Once the chapter ended, I totally made myself brunch (because it was a little late to start breakfast…).

Only, I didn’t exactly follow Scarlet’s sunny side-up-ness, since I wanted me some scrambled eggs doused in tomato juices. 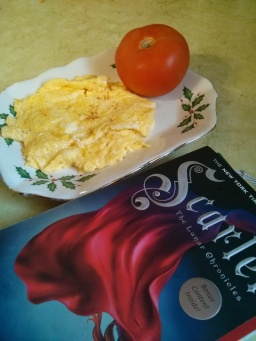 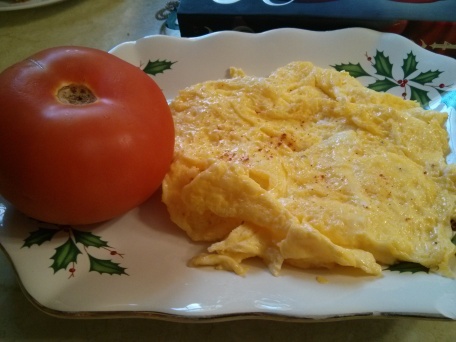 I did, however, make eggs this morning, in grand Scarlet-bubbling sunny side up style. Which was also just as good as scrambled eggs with tomato! 😀 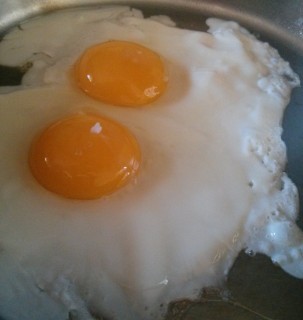