I am fully expecting this virtual reality immersion to happen soon, people. Make it work. 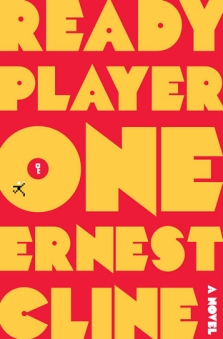 In the year 2044, reality is an ugly place. The only time teenage Wade Watts really feels alive is when he’s jacked into the virtual utopia known as the  OASIS. Wade’s devoted his life to studying the puzzles hidden within this world’s digital confines, puzzles that are based on their creator’s obsession with the pop culture of decades past and that promise massive power and fortune to whoever can unlock them. When Wade stumbles upon the first clue, he finds himself beset by players willing to kill to take this ultimate prize. The race is on, and if Wade’s going to survive, he’ll have to win—and confront the real world he’s always been so desperate to escape.

Nostalgia to the Max

This book pretty much took some of the best of Generation X pop culture and threw it into a virtual reality novel.

I had a few issues of this at first. Not because it’s Nostalgia Central or that it’s heavily hinged on the mothereffing ’80s (I mean, honestly, I know this time period had its highlights, and the Computer Age/Video Game era arguably began at this time…but it was hardly my favorite decade for video games or pop culture). My main issue was the fact that the eccentric Halliday himself pretty much set a future generation back by having most of them obsess over ’80s pop culture and forgetting that there is such a thing as progression in all things entertainment. The reasoning given in the book is that Halliday wanted OASIS-users to love the things he loved during his lifetime, but that kind of sounded like proselytizing to me, and it turns me off that that’s what it came down to.

It’s 2044 at this point, and I’m pretty sure even with the world going to shit (which it apparently has when you’re stacking trailer parks on top of each other), virtual reality and video gaming had some highlights outside of the ’80s. At least some post-’80s entertainment had mentions: science fiction anime was a big hit in the OASIS, with Cowboy Bebop and Neon Genesis Evangelion as occasional mentions, as well as the Whedon-created Firefly.

(As a video gamer, I will readily admit to never having played on an Atari or never actually playing Adventure, but I do appreciate that these two elements paved the way to the modern video games.)

That being said, I enjoyed the geeking out happening in Ready Player One. I enjoyed the fact that the plot revolved around one giant video game Easter Egg hunt, and I enjoyed that the tasks were as silly as Jousting for a key or acting out the entirety of Monty Python and the Holy Grail. And yet, even amidst all that fun, there is the underlying danger of being in virtual reality for so long: people tend to lose track of reality until it’s too late. Like many people who log into OASIS, Wade hinges on virtual reality to escape the crappiness of his situation, and often the book shows how low he and his fellow gunters get before things finally turn up.

And the female gunters, yo. I absolutely loved that there were brilliant female gamers in the book. I loved that Cline did not send them to the sidelines as “romantic interests.” In fact, as a romantic interest, Art3mis holds her own rather well and not even love could distract her from the hunt for the Egg. The other female I would love to talk about happens to be under the guise of a male avatar, but she’s just as badass and brilliant.

Also, that mecha-epic final showdown. Because what gamer, in his or her right mind, could resist a fight against giants?

All in all, the book was certainly worth the read. Whil Wheaton’s audiobook narration was fantastic, and even when the plot slowed down a bit in the middle (I could have done without Wade’s griping about his romantic angst), Wheaton managed to keep the brevity in his narration consistent throughout the book.

I’m not sure how I feel about the upcoming movie just yet, but I’d totally watch it.

I mean, these are totally realistic expectations here. I’m not asking for much, am I?