Katriona for MVP! Though the entire book is a reminder that it takes a whole village to raise a princess. No joke. Great on the characters, I’m still a little iffy about the magic. 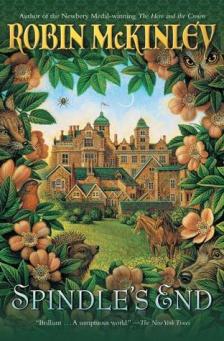 All the creatures of the forest and field and riverbank knew the infant was special. She was the princess, spirited away from the evil fairy Pernicia on her name-day. But the curse was cast: Rosie was fated to prick her finger on the spindle of a spinning wheel and fall into a poisoned sleep-a slumber from which no one would be able to rouse her.

Bad fairies are a bitch to deal with. But clearly there’s a reason not to invite them, especially when they’re plotting hundred-year vengeance. Particularly when this centuries-old curse is powerful and targeted to the newly-born non-magical being, and not even twenty-something fairies can do anything about it. Such is Pernicia, Evil Fairy Extraordinaire. As villainous as she is in the story, I have to respect her patience and planning. If only for a little bit.

Katriona nearly fell over. Golden hair! Golden hair? What an utterly idiotic gift! Aunt had always taught her that you were respectful of your magic! And here, the very first–Golden hair! from a fairy godmother, who could give you anything–well, almost anything. They would only have invited the best to be the princess’ godmothers. But here was the second godmother. Surely she would do better.

The sass that occasionally comes out of Katriona. I’m pretty sure Kat is where Rosie gets her sass from. Among other places, I’m sure, but it was totally mostly Kat. I tended to agree with her during the princess’ celebration when the gifts came rolling in, and pretty much laughed at her reaction after every fairy lauded Rosie with a beautiful singing voice and golden hair and porcelain doll skin. Her sass is maintained later on in the books, but I often found the beginning bits my favorite part.

All the animal friends! The number of different animals helping Kat and Rosie throughout the story is astounding and pretty awesome.

The badass boy and girl fairies. While most of the magic-users who are women are designated fairies and the men–who apparently have a sort of “magic”–are wizards, there is such a thing as male fairies. A few of them even show up to help in hiding Rosie from Pernicia.

The wishy-washy magic system. I’m not one to complain about old magic, especially when it’s ethereally described as McKinley often does with her books, but there was too much overflowing magic that made little sense to me in this book. What is baby magic and how does it differ from the other magics in the story? How are wizards and fairies different really? Can’t they both do magic? I felt like there weren’t any set rules to using magic, and it felt vague to me.

Slightly predictable getaway plan. Alright, so it may have backfired anyway, but I kind of saw that coming the moment Peony came into the picture. I would have been severely disappointed had the plan with Peony and Rosie tricked Pernicia. Thankfully, the story continued further from there.

3.5 out of 5 cookies! It wasn’t my favorite McKinley by a mile, but it was still pretty good.

The Benefits and Curses of the Fairy Gift

After some time chortling about the number of kind of pointless gifts the fairies gave to Rosie, I started thinking about whether it would be better to get useless gifts over ones that could potentially–and permanently–harm a child while growing up. I mostly remember Ella in Gail Carson Levine’s Ella Enchanted and how the “gift” of obedience she got stuck with pretty much screwed her over for the most part.

Some of the gifts Rosie got–like having a bell-like voice–may not go down well especially when Rosie can’t carry a tune, but a few of them–like embroidery–would save up time having to learn a new trick. (Though arguably, the learning is half the fun of the thing, IMO.)

Now, my thinking is gifts shouldn’t be given so haphazardly like what fairies were doing in this book. I’m not too keen on changes to my natural hair unless I’ve got a say in it, and while I would love to have bright blue hair right about now (and would totally wish for it on a tooth or something, like Karou did in Laini Taylor’s The Daughter of Smoke and Bone), I wouldn’t want to be stuck with it my entire life. Rosie hated her hair for good reason. It wasn’t something she particularly wanted, and having her hair consistently blond and kiddy-curly would drive any self-respecting woman mad. It’s definitely why the girl took shears to those beautiful golden locks.

That’s just me, though. 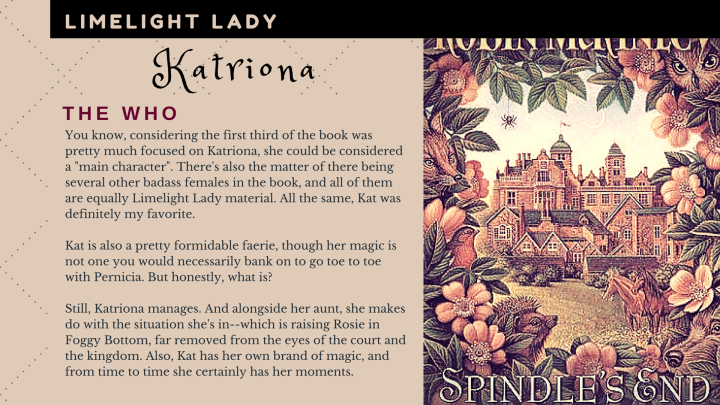 How about YOU? Are you willing to let fairies grant you a gift? What kind of gift would you like?