Talk about rooting for the lesser evil. It was difficult because THERE ARE NO GOOD GUYS. Not in this book. Nope. But it was still really really really good, you guys. 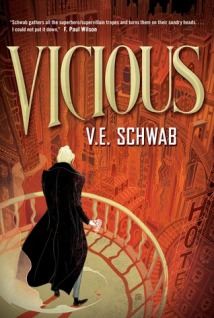 Victor and Eli started out as college roommates—brilliant, arrogant, lonely boys who recognized the same sharpness and ambition in each other. In their senior year, a shared research interest in adrenaline, near-death experiences, and seemingly supernatural events reveals an intriguing possibility: that under the right conditions, someone could develop extraordinary abilities. But when their thesis moves from the academic to the experimental, things go horribly wrong. Ten years later, Victor breaks out of prison, determined to catch up to his old friend (now foe), aided by a young girl whose reserved nature obscures a stunning ability. Meanwhile, Eli is on a mission to eradicate every other super-powered person that he can find—aside from his sidekick, an enigmatic woman with an unbreakable will. Armed with terrible power on both sides, driven by the memory of betrayal and loss, the archnemeses have set a course for revenge—but who will be left alive at the end?

Vicious is a page-turner. Not in an action-packed kind of way, but still a page-turner. I had expected the lovely and descriptive wordplay I encountered in Schwab’s Shades of Magic books, but I hadn’t actually expected to get into the dark grimness of the plot immediately. The beginning chapter took me into a graveyard in the dead of night (complete with thud thud thud sound effects). The story follows two college besties and their research revolving around the ExtraOrdinary. Then hijinks and accidents happen, the two roommates have a falling out, and suddenly one of them is killing off EOs while the other is plotting sweet, sweet revenge.

So yeah, honestly, it’s not hard to figure out that this book has no heroes. That’s what makes it so fun.

Why I Couldn’t Stop Reading

Plenty of humans were monstrous, and plenty of monsters knew how to play at being human.

This is pretty much the premise that gets left behind throughout the entire book. I will say that Vicious is not particularly action-packed. A lot of the book is character study, and if you aren’t endeared by the characters, it is more than likely you aren’t wowed by the message and plot of this book. Much of the plot revolves around a few key characters and what brought them together. In the case of Victor Vale, it’s what brought him to seek revenge and what he’s doing to go about getting it. In the case of Eli Ever, well, he thinks he’s killing off EOs for the greater good. As a reader, I was seriously stuck trying to figure out which was the lesser evil between the two (though honestly, I did pretty much decide on a side by the end).

Victor Vale was not a fucking sidekick.

Oh, Victor, you crazy man, you. As a character, Victor isn’t the bees’ knees. He’s not even close to someone I’d want to be friends with. But Mitch had the right idea about all this. I wouldn’t want to be Victor’s friend, but I certainly wouldn’t want to be standing against him, either. The man is definitely a high functioning sociopath. His inner mind theatre, however, is quite amusing in its own right, and altogether focused on an endgame.

Eli hesitated. “I can still see the line from your hospital bracelet,” he said at last. “At least wait till you’re feeling better.”

“Actually, I’m feeling fine. Better than. I feel wonderful. I feel like roses and sunshine and glitter.”

The bromance that isn’t a bromance. The first half of the book was great in the interaction department. I loved the college scene, and often I wanted to jump into the book and watch the events unfolding between Victor and Eli. That said, I may want to watch several hundred yards away, considering what the two can do to people close to them. Also, I would have said those two needed to hug it out. But I’m pretty sure the whole hugging thing no longer works when one shoots the other three times and has him arrested. Um, yeah, this bromance ship has completely sailed.

Hours passed in blinks as the two let it sink in, what that meant, what they had done. It was extraordinary.

Eli rubbed his thumb over the fresh skin of his palm, but Victor was the first to speak, and when he did, it was with an eloquence and composure perfectly befitting the situation.

The writing is just…gah. For a dark book, Schwab litters it with sentences that made me giggle a bit. It was easy to get lost in the writing because of this, especially when Schwab also manages to end each chapter in a way that had me craving for the next.

Suffice to say I enjoyed the book. I am sad that it ended, and the countdown towards the final confrontation was only semi-satisfying. That said, I was made aware that there will be a “Vicious #2” coming soon, and I cannot wait to see what it’ll be about, now that the Victor-Eli showdown has resolved itself. 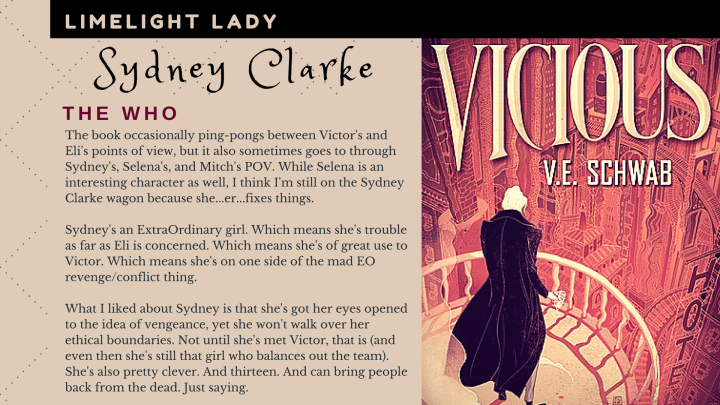