THE WAY OF KINGS

I long for the days before the Last Desolation. Before the Heralds abandoned us and the Knights Radiant turned against us. When there was still magic in Roshar and honor in the hearts of men.

In the end, not war but victory proved the greater test. Did our foes see that the harder they fought, the fiercer our resistance? Fire and hammer forge a sword; time and neglect rust it away. So we won the world, yet lost it.

Now there are four whom we watch: the surgeon, forced to forsake healing and fight in the most brutal war of our time; the assassin, who weeps as he kills; the liar, who wears her scholar’s mantle over a thief’s heart; and the prince, whose eyes open to the ancient past as his thirst for battle wanes.

Trust an epic fantasy to have an epic book jacket description.

The length of this book seems to be the norm in some of the epic fantasies I’ve read so far, and to say that it isn’t daunting at first glance is like saying ice cream isn’t cold. Yes. A thousand-page book is hella daunting. In fact, books over 800 pages tend to have the tendency to make me cringe. It’s particularly a bad idea to read something of this length if you want to make constant updates on book reviews and read with the speed of a turtle like I do. Let’s not even talk about the attention span needed to keep track of this epic a storyline. All in all, I’d say I try not to overdo it with epic fantasies in a given year. The Way of Kings, after all, took me a couple months to finish off, and only because I spent the last two weeks reading ONLY this book during my work commute.

I will say this. Sanderson is a hell of a brilliant worldbuilder. Often I worry about taking long breaks when I’m reading a lengthy story, because it could be weeks, months, or even years before I pick it up again and finish it. I started TWoK last May and then promptly stopped reading about three hundred pages in to pick something else to read. Since then it had been me picking the book up on and off to read a hundred or so pages.

But even with these constant breaks and long time spans, getting back into the swing of the story was not a hard thing to do. Sanderson spun so much rich detail into Roshar that it felt like I’d been traipsing around in a world full of high storms and fabrials, and returning to Kaladin’s bridge crew and Dalinar’s war camp in the Shattered Plains or Shallan’s cozy rooms in Kharbranth was weirdly like coming home. Except, you know, I don’t really want to live in the Shattered Plains. As a woman, I probably wouldn’t be allowed to wield a Shardblade there. Also, Chulls are fucking horrific. 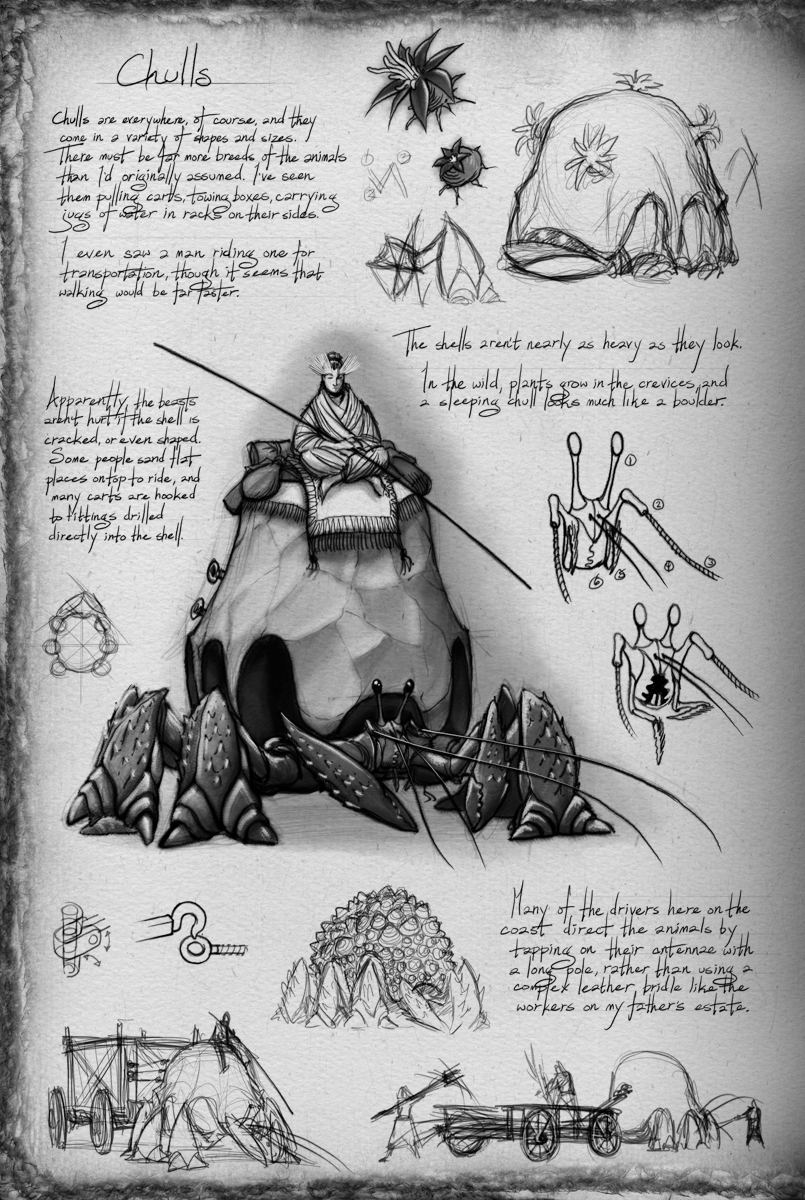 The Way of Kings follows several characters in Roshar, a part of Sanderson’s Cosmere galaxy. (Yes, he’s invented a galaxy sandbox for his adult fantasies…) The main story revolves largely around Kaladin, Shallan, and Dalinar (occasionally Adolin), with several other viewpoints scattered in there, including the Assassin in White, Szeth. For the most part, I loved the different viewpoints given through the three main characters, and often I couldn’t figure out which of them was my favorite, because, you know, they all had different roles to play in the story.

“If we do nothing with the knowledge we gain, then we have wasted our study. Books can store information better than we can–what we do that books cannot is interpret. So if one is not going to draw conclusions, then one might as well just leave the information in the texts.”

I was a little disappointed that Shallan got the lesser limelight in the book, because I thought her plotline was certainly the most illuminating, and it sometimes got a bit scary there…I mean, Shallan’s sketches are all well and lovely, but egads they get creepy, especially when she’s drawing creatures looming over scenes they aren’t supposed to be in. Admittedly, Shallan’s story wasn’t the most exciting, but it’s my understanding she gets more of a focused storyline in Words of Radiance.

Things were the same, yet different. One step, and the world flipped upside down. The villain became the hero, the hero the villain. “I–” Kal said. ” I can’t decide if what you did was incredibly brave or incredibly wrong.”

Lirin sighed. “I know how you feel.”

Ultimately, TWoK’s focus was Kaladin Stormblessed. Kaladin’s journey had been the most traumatic, and on occasion we get a glimpse of his past and why he’s ended up where he is at the beginning of the story. It was easy to root for Kal, and he was ultimately my favorite of the three “main” character viewpoints. Also, having a spren like Syl around is awesome.

Where the book kind of lost me at times was when it petered off into those Interludes scenes. While they did give more insight into the background of the world, the viewpoints and conversations were too brief for me to care about learning who the characters were or why they were doing what they were doing. It might be a big mistake in the long run, because hey-oh, I probably should have been paying attention to people named Nan Balat or something, but I just found myself whining. I mean, honestly, can we get back to my boy Kal already? Yeesh. To be fair, Szeth’s chapters had a certain allure to it. I mean, he’s a freaking assassin, so of course he’s interesting!

“I point out truths when I see them, Brightness Sadeas. Each man has his place. Mine is to make insults. Yours is to be in-sluts.”

Oh, and the Wit. The Wit is hilarious and knows much more than he should. But then again, the Wit is totally a space-traveling storyteller. Yep.

“What is a man’s life worth?” Dalinar asked softly.

“The slavemasters say one is worth about two emerald broams,” Kaladin said, frowning.

“A life is priceless,” he said immediately, quoting his father.

And Dalinar. I like Dalinar. I cheered for Dalinar when he got the girl. Because holy hell, he needed something in his life to go right for once. XD

And, as usual, the best parts of all the Sanderson books I’ve read so far often hits at the last few hundred pages. He’d laid so much of the groundwork in the first two-third of the book that all the tension comes to a head at the last third. I felt just as betrayed and courageous as Dalinar, as curious and excited as Shallan, and as confused and elatedly brimming with Stormlight as Kaladin. And all because I got to know the characters really well.

Does this mean the book is worth reading 900-1000 pages just to get to the splendidly good parts? I suppose that depends on how much you really want to immerse yourself into the Cosmere. I, for one, cannot wait to rip into Words of Radiance. Even though *SOB* it’ll probably take me decades to finish. *end melodrama*

Have you read this book? What did you think of it?