The fall season is practically the funnest and busiest time for me, and honestly, most of the “busy” bit tends to fall on October and November, especially since I’m spending half that time baking goodies for relatives and friends. I also have two siblings sharing the same birthday month, so I definitely had to step it up and make them something extra creative. My sister already got a Nyan Cake, so at this point, I was all caked out.

Which meant when my brother’s turn came, I wanted to do something else. 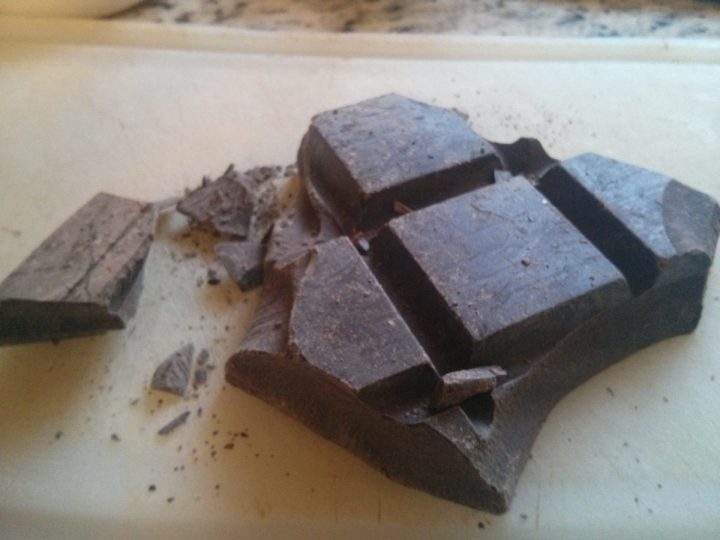 Thank you, Erin Browne, for the Ooey Gooey Fudge Brownies Recipe! I’ve made these brownies a few times now, and they’ve always been real delicious (although, yes, again, I made alterations according to my semi-sweet vs. dark chocolate taste buds).

Preheat oven 350 F. Coat 8×8 baking dish with light layer of cooking spray (or, well, if you want to take the brownies easily out of the dish, line the dish with parchment paper).

Some Changes: I actually like adding a bit of a dark chocolate glaze to smooth out the top of the brownie, but for this particular case, I didn’t, because my sister wanted a rougher look to our “brownie door.” I also didn’t have any dark chocolate chips in my cupboard at the time, but I did use my last batch of Jacques Torres dark chocolate (which is AMAZING, by the way), so I just broke that up into pieces and tossed it into the Tbsp of flour. For pans that are larger than 8×8, I would suggest lessening the baking time, which I did. I think 20 minutes was my maximum, to be honest. The only other thing I would also point out is that I found this set of brownies was a little less gooey than the previous times I’d baked it. I’m thinking it’s because my eggs were medium-sized, so I’d probably go with larger eggs whenever I make these brownies again.

SPOILER ALERT: If you have not watched the latest season of HBO’s Game of Thrones and don’t plan on getting a face-full of spoilers, you might want to skip the rest of this post altogether, because uh, yeah. For the brownie is dark and full of spoilers.

My sister and I had already decided early on what we wanted to do for our brother on his birthday. In fact, it would have been PERFECT had we managed to get the Hodor Funko Pop doll, but it was already vaulted, and neither of us were too keen on paying an exorbitant amount of money just for a tiny decorative figure (even if it IS Hodor). So we decided on the next best thing:

A Hodor cake. Because my brother must always be taught that we respect men who hold doors.

Too soon? Yeah, my brother thought so, too.

With my sister’s help–because she’s the more artistic one–we proceeded to gather up some colored melting chocolates to use as our brownie topping. Using this picture as reference, my sister began her awesome piping skillz and started sketching out the epic Hodor image that continues to haunt my siblings and me even now.

2 thoughts on “Food and Fandom: Hodor”