A 1920s romp in supernatural New York City, with an ensemble of uniquely gifted characters. Seriously. This is my kind of book. 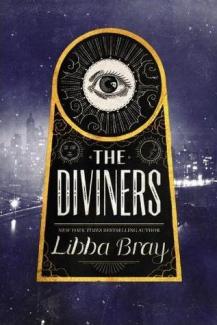 Do you believe there are ghosts and demons and Diviners among us?

Evie O’Neill has been exiled from her boring old hometown and shipped off to the bustling streets of New York City–and she is pos-i-tute-ly ecstatic. It’s 1926, and New York is filled with speakeasies, Ziegfeld girls, and rakish pickpockets. The only catch is that she has to live with her uncle Will and his unhealthy obsession with the occult.

Evie worries he’ll discover her darkest secret: a supernatural power that has only brought her trouble so far. But when the police find a murdered girl branded with a cryptic symbol and Will is called to the scene, Evie realizes her gift could help catch a serial killer.

As Evie jumps headlong into a dance with a murderer, other stories unfurl in the city that never sleeps. And unknown to all, something dark and evil has awakened…

I meant to read this book for October, because Halloween-ness and supernatural murder mysteries. But I may have gotten distracted somewhere along the line and only just managed to finish the book a few days after Halloween. Oops? Anyway, doesn’t matter, because I enjoyed my journey in the least?

“Oh, law, law, law,” Blind Bill said, patting his chest. “Ain’t that the way of the world, now? Good luck turns bad. Bad luck turns good. Just a big rolling craps game played between this world and the next, and we the dice getting tossed around. You go on home now, Mr. Campbell. Get you some rest. Live to fight another day. Plenty of time for regrettin’. Go out and have you some good times while you still young.”

The Roaring Twenties. The time period itself already had this book going for it, and you could tell Bray did her research on the ’20s, because whenever I read the descriptions in her book, I felt like I was being transported into the middle of the scene. I was sitting at the Hotsy Totsy Club listening to the jazz and sipping on some hooch or sitting on the piano while Henry DuBois played his catchy jingles. It was lovely, and the best part is that Bray added much of what made the time period alive: the good stuff and the bad stuff as well.

The monsters are real. It’s really disturbing how a bunch of the societies and cults in the ’20s are based off of real people. I think I was more horrified over the old-fashioned, backwards thinking that some of the people in the book had as opposed to the actual supernatural murders happening (though admittedly, those were super-gruesome, too). At some point, the stuff in Brethren pretty much just made me want to chuck the book out, or, you know, yell at stupid people. Because I got emotional like that.

The Diviners themselves. Can I just say how many awesome super-powered teens there are running around in New York City? Like, seriously, I don’t think I disliked any of the Diviners that were mentioned in the book. Henry was adorable, Theta is loooooove, and Memphis. Memphis’ storyline kind of became my favorite, and I totally dig his romance with another Diviner. There were even more minor characters that were mentioned (for instance, a Chinese girl in a restaurant) that I really wanted to know about.

The Pentacle Killer plot. Just…yikes. I admit I mostly read the book in the cover of morning light, because trying to read the thing at night was a little creepy. Especially with the Naughty John scenes. Those get super-scary really quickly. There was one point where I sat on the couch getting really anxious over whether one of my favorite characters would die or not, and eventually I had to stop right beforehand because I didn’t want to know quite yet. YEAH, I GOT TO POINTS OF HYPERVENTILATION, DAMMIT.

The overarching story. Aside from the Pentacle Killer plot (which was the main story), there were a lot of storylines that were leading up to some kind of catastrophic event in the near future. I want to know more, and it sucked that we only got glimpses of it in The Diviners. Like, give me MORE please?

A pair of Blue Noses on the next bench glared their disapproval at Evie’s knee-length dress. Evie decided to give them a real show. She hiked her skirt and, humming jauntily, rolled down her stockings, exposing her legs. It had the desired effect on the Blue Noses, who moved down the platform, clucking about the “disgrace of the young.” She would not miss this place.

Evie O’Neill. What to say about Evie. Evie’s a hoot and a half, but sometimes she is over-the-top. She knows she’s over-the-top. She does it on purpose, because she likes the attention. Which could make her a polarizing character, because honestly, somebody who tries to hog the limelight gets really tedious to read about, and I will admit that at times, I had to roll my eyes with Evie. By the end, I liked her better when she was focused more on the Pentacle Killer case than when she was striving for the dramatic. Maybe in the next book she’s less of a highlight and someone else will get to be the main attraction, because as much as I actually like Evie, I think I could only handle her in small doses.

There are a ton of characters. Not gonna lie, I adored the characters, and honestly, I would have loved to have seen more character stories highlighted in the book. But I also felt like trying to include that many characters–and subplots (most of which weren’t even resolved)–slowed the story down a bit. There was an entire scene with Mabel and her pro-political parents that didn’t really add to any other plot than her own. It might not have helped that Mabel is probably my least favorite of the secondary characters, but hey, there had to be ONE person, right?

That random romantic turning point. Honestly, I didn’t think Sam Lloyd was going to get very far with Evie, even if he is a smooth-talking–and certainly attractive (according to several descriptive accounts)–lad. But there was a development between Evie and another that left me scratching my head. It just sort of happened with Evie, really. One minute she shares a Ferris wheel ride with the guy and suddenly she’s thinking about wanting to snog him. I mean, I suppose it fits with Evie’s character, because she does seem like a fly-on-the-moment type of person, but I just wasn’t feeling it. Honestly, I could have been fine if she hadn’t hooked up with anyone.

4 out of 5 cookies! I read the book jacket summary for Lair of Dreams and it looks like a Henry-centric book! (Well, Henry and the Chinese girl I’d mentioned wanting to know about.) Would totally pick up the next one. 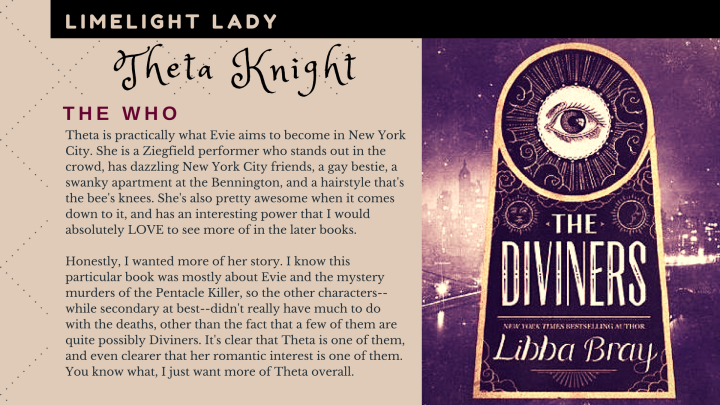 Did you read this book? What did you think?

3 thoughts on “Hooch and Jazz Babies || The Diviners Review”