So. Much. Holiday. Stress. I don’t think I’ve been this busy before the holidays until this year, what with trying to get writing down in November and finishing my reading list and shopping, all that. darn. shopping. It could drive a woman bonkers. In fact, I’ve been walking around telling people to call me the ULTIMATE BUNNY, so maybe I have already gone insane.

This past week I’ve barely responded to comments and made any comments myself. For my fellow blogger friends, I sincerely apologize. I have been reading your posts, but lots of transition on the past few weeks meant little time to do anything else. That said, while I have been doing the other regular stuff, I just haven’t done much this past week to talk about the books I’ve read or the things I’ve written.

I guess it’s good that I have a monthly wrapup to do this!

I started a number of books over the month, but while I loved a bunch of them, and do plan on finishing them, my attention span kept going to different things. Hence the lack of finished books and written reviews.

I started the first three, and I intend to finish them before the end of the year! We’ll see how that goes, hahaha.

My friend and I took a break on our usual movie-watching spree, but that doesn’t mean I didn’t go ahead and watch movies on my own volition. It definitely helped that I’ve been knitting quite a bit on top of my other hobbies. 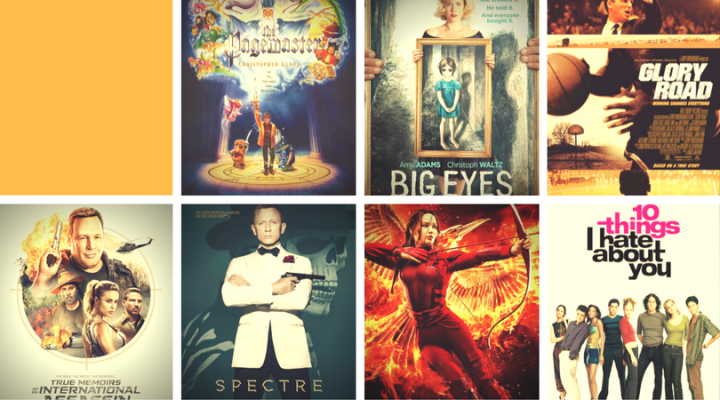 The Pagemaster || Big Eyes || Glory Road || True Memoirs of an International Assassin || Spectre || Mockingjay: Part 2 || 10 Things I Hate About You

Daredevil Season 1 – Finished the first season! I will admit that after the first few episodes, the show kicked in for me, and I actually liked it. The episode with Stick may have been the defining moment between my indifference and my partiality. All the same, I might wait a bit longer to watch season 2, since I thought the first season ended on a swell note.

The Crown Season 1 – Why is there only one season?! Darn you, Netflix!

Roman Empire – Part documentary, part drama, and lots of Roman Empire-ness. I wasn’t much of a fan of the documentary part, so I didn’t really get past the first episode. Instead, I ended up settling for Spartacus.

Empire of the Tsars – The time period and history is fascinating, but the documentary is rather dry. I wasn’t digging it.

Good Girls Revolt – YES AMAZON THANK YOU FOR THIS.

My gaming was limited over November, but that didn’t stop me from starting a few things anyway, even if it was just to fiddle around with a few things. That said, much of my gaming might be at a standstill, since at the moment, I cannot get my TV working. Sigh.

Dishonored – I got Dishonored 2! But that also brought about all of the first Dishonored so I ended up playing that instead.

Dragon Age Inquisition – I finally got Dorian to sleep with my male-Inquisitor! YAAAAS.

Ultimate Chicken Horse – They call me the ULTIMATE BUNNY. We can all blame this game for giving me an over-inflated ego due to my winning skillz (though honestly, some of that can be attributed to luck and the propensity to screw other people over).

Lawd, if I listed down all the foods and drinks I’ve had over November, I would need a separate post. So I’ll just simply throw these pictures here…

Some Star Wars News, including a KOTOR trailer that looks PHENOMENAL. Oh, and the Mother of Dragons may be joining a young Han Solo in an upcoming Star Wars movie. Yeah, that’s totally happening.

Fantastic Beasts and Where to Find Them is not just one movie, but five! This sounds mighty fantastic, if I do say so myself. Honestly, I loved the first one as is (minus the little Graves reveal at the end, I mean, ugh, NOT who I pictured as Mr. G. to be honest), but I’m biased in that A) it’s Queen Rowling‘s HP franchise coming back to enchant the world anew and B) the mothereffing ’20s, man.

When Mass Effect Andromeda was announced, the biggest question on my mind was always “ARE THERE GOING TO BE TURIANS?!” That question is answered and I am all the more stoked for this game. Then, of course, the gameplay trailer got released and I just…I want this game so much.

New A Series of Unfortunate Events trailer! Ugh. WHY do I have to wait until January?!

A frabjous day! Miyazaki is out of his retirement for the umpteenth time to do another Studio Ghibli film. YAAAAAAAS.

Fullmetal Alchemist finally has its live-action trailer. The effects look really cool, mind, though I’m going to reserve my judgments on this matter until I actually see the movie. The live action Rurouni Kenshin didn’t exactly leave me impressed on that note.

Rothfuss’ Kingkiller Chronicles gains a fan and a producer in Lin-Manuel Miranda. That is beyond epically cool.