Reading this volume really made me want to play the game again, if only to redo some of my crazy decisions (like trying NOT to get certain people killed, hem hem). That said, this was highly entertaining to read, and I adored the addition of random fairy tale summaries as told by various Fables characters (honestly. Gren’s retelling of Little Red Riding Hood was THE best.)

Even before the first issue of Fables , there were stories to be told, shadowy avenues to explore, and lives hanging in the balance! Bigby Wolf has seen plenty in his time as Sheriff of Fabletown…but nothing can prepare him for this…

It all starts with a simple domestic disturbance. But when Bigby learns that his old nemesis, the Woodsman who has an axe to grind, is part of the scene, things go downhill fast. And how will Bigby and Snow White keep their heads long enough to crack the case when they get caught up in a grisly murder mystery?

So there’s this series I’ve enjoyed the past couple of years called Fables. I had heard of it a while back because of course I had, being a fairy tale enthusiast and an admirer of comic books. I mean, come on. Fairy tale characters living in secret in the Bronx because some crazy Adversary took over each of their worlds. That’s the kind of shit I’d read in a heartbeat. Admittedly, the Fables series didn’t really pick up for me until I’d read the text story of how Bigby met Snow White in Volume 2, and from there, I was hooked.

When I’d first heard that Telltale was actually doing a game based off of it, I was pretty damn excited. Heck, it was one of my first posts on this blog.

Needless to say I have since played The Wolf Among Us game and loved it. And then I realized that they made a graphic novel of TWAU, which was based on the works of Bill Willingham. Funny how that happens, but I went ahead and decided to read it just to see which route the writers went and decided was “canon.”

That can sometimes go either way, to be honest. Either you’re the type of person who likes having a canon story to fall upon, or you like paving the path of your character with your decision. In any case, it’s not really feasible, making the graphic novel a Choose-Your-Own-Adventure kind of thing, and in this case, I’m not the type of person who minded so much that it didn’t. So generally, I enjoyed it.

First off, the illustrations. The artwork in TWAU is stellar, and I absolutely loved the issue covers as well. I’ve always adored Bigby, but his rendering in the TWAU graphic novel is definitely my favorite of the lot (that said, Bigby in the actual Fables comic will always win out for me). 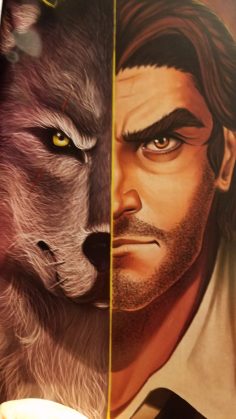 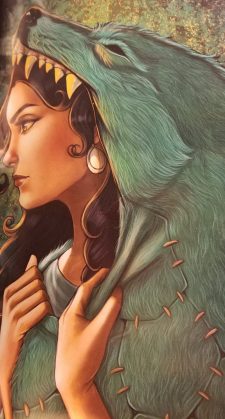 Character retellings of fairy tales. The major difference in the game and the graphic novel is definitely the addition of visual retelling in the novel. Where the game focused on a showing-not-telling format and an action-packed pacing, the graphic novel took a few breaths in the pages by getting characters to color the retelling of a story in their own words. Gren’s retelling of Little Red Riding Hood and Bigby Wolf’s past has got to be my favorite. Bigby’s own retelling of Gren’s past was just as good.

Bigby’s sardonic humor is still there. Honestly, I always play scumbag!Bigby, but his sarcasm in the graphic novel is even better. Especially where Colin is concerned. Colin’s a lovely pig. 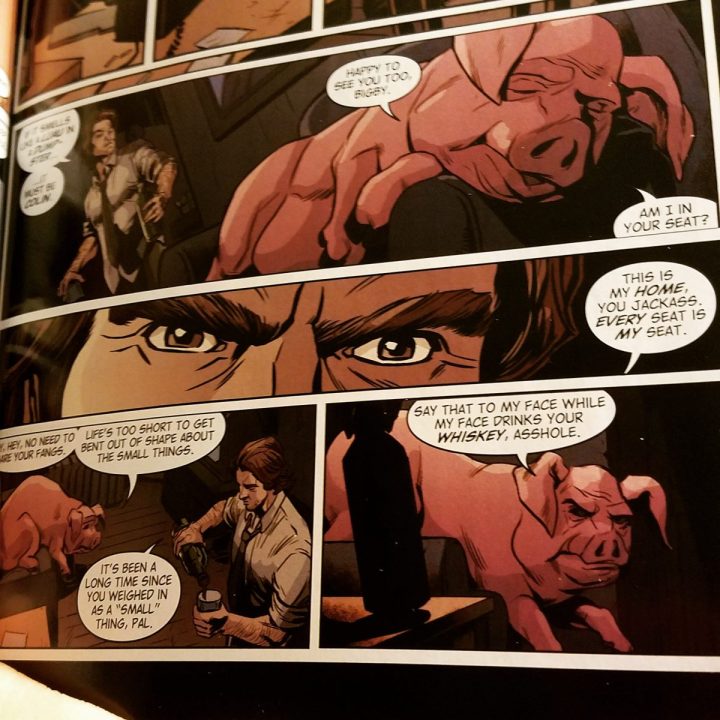 The tie-in with Ichabod Crane and Bigby, as well as some interesting backstory. I really loved that Bigby’s backstory is a bit fleshed out here. We don’t really see much of what has happened prior to present-day Fabletown, so seeing a glimpse of how Bigby and a few other of his fellow Fables dealt with living in New York throughout the centuries is an eye-opener. I liked that they put Bigby in Salem during the witch trials. Gives you an idea of how the whole thing might have gotten instigated by Fables living among the mundies, haha.

My ONLY caveat of having a graphic novel (and a story) take place way before Fables: Legends in Exile, is that Snow and Bigby are going to be dealing with so much sexual tension and absolutely NOTHING WILL HAPPEN. I can tell you that much. Unless they completely change the canon. I’m hoping to see more Snow/Bigby moments anyway, even if Bigby doesn’t get the girl until Volume 5 of the actual series. And OH. No Cinderella. Bummer. She was definitely my favorite of the Fable women, hands down.

4 out of 5 cookies! I’ll have to hunt down a copy of the second volume, just to see how Bigby canonically deals with a few baddies that have yet to show up in Volume 1.

5 thoughts on “A Fabletown Mystery || The Wolf Among Us Review”