Not gonna lie, the entire time I read The Bear and the Nightingale I kept thinking about the old-school baking that was happening in the oven at Pyotr’s hearth. Every single time, Dunya was always baking something, and Vasya almost always tried to steal some of the food that came freshly out of the oven.

Vasya, thinking of cakes, went meekly to her stool. There was a heap of them already cooling on the table, brown on the outside and flecked with ash. A corner of one cake crumbled as the child watched. Its insides were midsummer–gold, and a little curl of steam rose up. Vasya swallowed. Her morning porridge seemed a year ago.

So naturally, I turned to Russian inspiration for this Food and Fiction Challenge, and there were several descriptions of food that made me think about what I wanted to do.

They dined outside, on eggs and kasha and summer greens, bread and cheese and honey. The usual cheerful muddle was subdued. The young peasant women stood in knots and whispered.

One thing I did note was that there was a lot of bread and honey involved. So from the get-go, I wanted to do something with bread and honey. And honestly, bread with honey just sounded lovely and traditional and simple (well, not too simple, considering bread tends to take more time with the whole rising thing).

The table was laid with two silver cups and a slender ewer. The scent of warm honey floated through the room. A loaf of black bread, smelling of rye and anise, lay beside a platter of fresh herbs. On one side stood a bowl of pears and on the other a bowl of apples…

Cautiously, Vasya picked up an apple and bit down. Icy sweetness dazzled her tongue. She reached for the bread. Before she knew it, her bowl was empty, half the loaf was gone, and she sat replete, feeding bits of bread and fruit to the two horses.

And then it hit me. Why not put apples INSIDE the bread, too? Isn’t there some kind of Russian dessert that does that?

So I found that there was. Say hello to the pirozhki.

The Bear and the Nightingale – Winter King’s Pirozhki 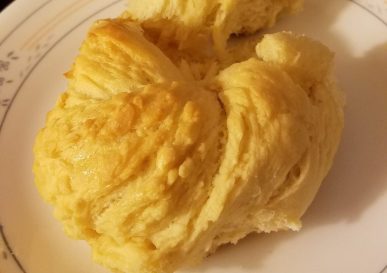 In essence, pirozhki are baked or fried bread buns filled with stuffing inside. Stuffing can be either savory or sweet, and the dough can be formed into various shapes so long as it holds the stuffing properly inside. Typically, people use meat like beef to stuff inside a pirozhki. Personally, I always go for the sweet stuff, because why the heck not.

This brought me into thinking about the book, The Bear and the Nightingale itself. For the most part, I was struck by the scenes in the winter-king’s home. I swear he always tried to feed Vasya, so whenever Vasya woke, she always found an abundance of fruit, bread, and mead at the table. Honestly, I wouldn’t be surprised if Morozko HAD put in some apple pirozhki for Vasya to eat at some point. They sound super-delicious.

I got the recipe from Natasha’s Kitchen, along with the apples and then-some. I really didn’t do anything differently from the recipe, so I won’t re-hash the steps and ingredients again. I mean, there was some point where I ALMOST forgot to put the second half of my divided sugar, which would have been a BAD idea, but I remembered at the last minute, so it was all good. 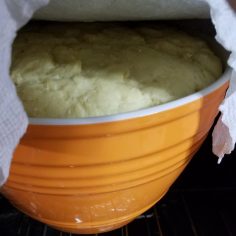 Just something to think about, though, as far as playing with yeast: I do not have a thermometer (I really need to get one, considering…) nor do I have a proofing chamber, so I improvised by turning on my oven, letting it heat up for a couple minutes, then turned it off again and let it cool. Once it was relatively warm, but not too warm, I put my dough in the proofing chamber and let it rise. The effects were roughly the same as a proofing chamber, and honestly, the bread baked so well that I have no complaints.

I also didn’t process the apples, choosing instead just to dice them and then lightly cook them with sugar. Nothing fancy. Next time, I may add some cinnamon, though.

I did run out of apple filling, so for the last two batches of dough, I broke them into pieces, rolled them into round shapes, and then doused them with honey before baking them in, too.

Verdict: The results were MAH-VELOUS, dahling. I could taste the warmth of the hearth and of gold and sunshine, etc. etc. Now all I need is a bit of mead…