At this rate, I should really just do a monthly unboxing post of my Owl Crate, because I always get excited when the box comes to my door! But that would mean a monthly commitment to my Owl Crate subscription, and I’m not the type of person who’d be willing to get a box of books I would very well not read for a long, long time. Which is probably the case of the January 2017 Owl Crate, and much like the case of the March 2017 Owl Crate.

That said, this has been the third time I’ve decided to spend money on curated book-stuffs, and for some reason, the swag just keeps getting better and better every time! This February Owl Crate has got to be my favorite so far. 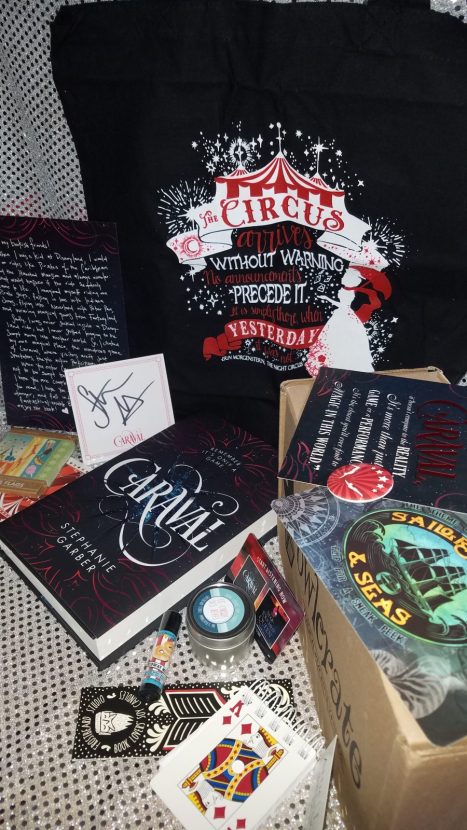 The curators seriously went above and beyond on the Circus theme, and it looked like they totally enjoyed themselves doing so! There was a lot of swag that I adored, and there were definitely a few that I absolutely coveted ever since I’d heard about them.

I mean, I totally figured Caraval by Stephanie Garber would be the book of choice for the theme box, and I’ve been wanting a copy of this book since it was offered up as an ARC on NetGalley. I’ve also been hearing quite a number of good reviews on the book, so I cannot wait to read it at some point (not soon, because priorities, lmao). 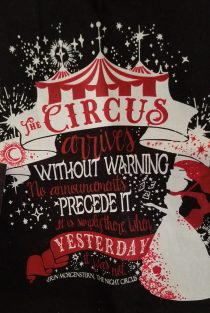 Then I got an email that Evie from Society6 would be designing a tote bag for the theme, and I quite figuratively lost my shit. I’ve been oggling her stuff since I saw her beautiful designs of Laini Taylor’s A Daughter of Smoke and Bone, and I’ve been wanting to purchase something from her since. I eventually will, when my budget allows me, but for now, the tote bag is everything.

Like Evie’s tote bag, a few of the swag was inspired by The Night Circus by Erin Morgenstern. Other than Caraval, The Night Circus was pretty much the type of circus-themed book I would have read given the chance. Now, I will say this about The Night Circus, I wasn’t exactly a big fan. HOWEVER, the aesthetic designs for the book (and the descriptions in the text) were beautiful. I’ve made cookies as an homage to the story, and played the Storynexus game when it had come out as a promotion for the book a long ways back. So I was pretty tickled that not only was the tote bag a beautiful rendering of one of the book’s quotes, I also got a lovely-smelling caramel corn candle to go with it! Now I DO feel like I’m in Le Cirques de Reves!

Some other stuff include circus-themed page flags (which are so useful for when I want to keep track of pages I want to quote for review), a notepad with a cover made out of repurposed playing cards (which is awesome), a cinnamon donut lip balm, downloadable audiobook excerpts of both Caraval and The Star-Touched Queen by Roshani Chokshi, and of course, the book plate with the author’s signature (both of which I have now tucked into the book jacket itself so I don’t lost them. Really lovely stuff!

So I’ve also got a few books off my library, mostly because I was lacking in reading challenge books, so I grabbed a couple steampunk stories: The Velocipede Races by Emily June Street and Legenderry by Bill Willingham (because he created a steampunk series WHAT). I’ve also got Truthwitch by Susan Dennard since I’m trying to decide whether or not I want to get Windwitch on the day Dennard comes in for a signing at my local bookstore.

Phew. That’s about it, yep!