I feel like I’ve gotten more paranoid now after reading this book than before I went into it. A lot of this probably has to do with there being way too many characters that were too coincidentally linked with the asylum. And, like, seriously, who converts a dilapidated asylum into a dorm room. Just…I cannot. That said, at least the scare factor wasn’t as bad as I imagined. I’m not big on horror reads, but I’m also not big on horror, and yet I found myself getting desensitized after playing Until Dawn multiple times…So you crazy asylums can go suck it.

Still, you wouldn’t find me anywhere near one of those things. 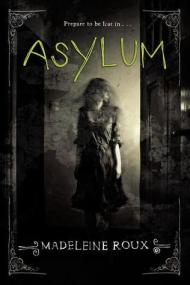 For sixteen-year-old Dan Crawford, New Hampshire College Prep is more than a summer program—it’s a lifeline. An outcast at his high school, Dan is excited to finally make some friends in his last summer before college. But when he arrives at the program, Dan learns that his dorm for the summer used to be a sanatorium, more commonly known as an asylum. And not just any asylum—a last resort for the criminally insane.

As Dan and his new friends, Abby and Jordan, explore the hidden recesses of their creepy summer home, they soon discover it’s no coincidence that the three of them ended up here. Because the asylum holds the key to a terrifying past. And there are some secrets that refuse to stay buried.

The Short and Long of It

Normally I avoid horror stories. Sometimes it’s because I want to avoid the gorefest in some, but honestly it’s mostly because when I read horror, I tend to let my imagination get the better of me, and then I start worrying about the wee demon I am sure I have under my bed. And then that leads to thoughts about said demon being hungry and me running out of sacrifices to satiate it.

Whatever the case, horror isn’t my go-to for reading.

But I have tried to branch out. And while it’s not my typical faire, it randomly shows up on my reading list out of whim or initial curiosity. In this case, it was definitely the photographs and the book cover that brought me to reading Asylum.

The funny thing is Asylum puts two of the main reasons why I try to avoid these books: ghosts and asylums. All it really needed was a clown and I’d be scared out of my mind.

The book has been compared to Miss Peregrine’s Home for Peculiar Children so much that it is hard not to compare Asylum to the former, and honestly, I picked up the book because of Miss Peregrine, so…yeah. The pictures were just as intriguing, and I liked the idea of people telling a story with pictures included. Only, sometimes the pictures did throw me off, because Roux would be describing one thing, and then I look at the picture and oh, hey, I’m going: “But…the warden isn’t sitting down at the center, he’s standing! And the girl at the far right isn’t the one with the discombobulated head…I’m confused…” For the most part, though, the pictures added to the imagination, and it was a nice touch.

I liked the premise of the book. Dan Crawford goes to a summer program and his current home situation throws him into a dormitory that used to be a hospital for the insane. Not just any asylum, mind you, but one filled with terminally insane, homicidal folk with an equally terminally insane, homicidal warden at its head. Pulled by a need to investigate the mysterious pictures at the old warden’s restricted office, Dan becomes embroiled in some weird historical investigation where he finds out that the past can quite literally haunt you. Especially if your name’s Daniel Crawford.

Dan’s friends are also hoots and a half. Jordan was probably my favorite, but that’s mostly because if I was a character in the group, I’d be the scared math-geek with hermit-like coping mechanisms. But that’s assuming I’d make it that far into a program that has an insane asylum as its dormitory. I probably wouldn’t have even applied for the program to begin with. You wouldn’t see me anywhere near old hospitals–oh, wait, I sort of kind of work in one now. Oops?

What did annoy me was the weird progression that the story took. What became an interesting mystery and delving into people’s minds boiled down to a case of some not-so-mild possession. Not much was really explained by the end, and I’m still not sure how some people got possessed while others didn’t. And the random letters Dan kept getting in the story was never really fully explained. I mean, yeah, Dan made conjectures, but there wasn’t much basis in them, and I’m not sure that’s supposed to be left open because this is, after all, only the first of a trilogy.

There was also the fact that this is apparently meant to be a young adult book, though I didn’t really see much of that in the book. Yes, there’s a romance, and yes, the characters are your typical YA characters, but uh, there wasn’t much drama in that department. High school kids go to a college-like setting with college-like classes, and honestly, nobody romped behind closed doors in a dormitory? Ugh, what a bore.

All in all, though, it was a good story and a quick read. I wasn’t wowed by it, and I actually did prefer Miss Peregrine over this one, mostly because of the more fantastical, supernatural element, but I still liked the story and I’d probably pick up the next at some point.