HOW have I not read this series until now?! This is pretty much sassy sexy females romping around a fantasy world slaying orcs and partying when the deed is done! With more plot, of course, but COME ON. Sassy. Sexy. Females.

Who are the Rat Queens?

They’re a pack of booze-guzzling, death-dealing battle maidens-for-hire and they’re in the business of killing all the god’s creatures for profit. Meet Hannah the Rockabilly Elven Mage, Violet the Hipster Dwarven Fighter, Dee the Atheist Human Cleric and Betty the Hippy Smidgen Thief.

This modern spin on an old school genre is a violent, monster-killing epic that is like Buffy meets Tank Girl in a Lord of the Rings world on crack!

So I pretty much devoured the first two volumes of this series and realized I couldn’t really review the first one without reviewing the other. For one, the first volume was this super-quick introduction to the world and the chaos that is the Rat Queens. The Rat Queens definitely brook no apologies for their penchant towards booze, drugs, and foul language, and if this was an ’80s band, they’d certainly be quickly assimilated into the world of sex, drugs, and rock n’ roll. Which makes them badass in a high fantasy world, and I love each one of them for it.

But seriously, Hannah steals the show every time.

Not exactly the “leader” of the Rat Queens (I don’t think there’s a definitive one between Dee, Hannah, and Violet, to be honest), Hannah is the elven mage who’s got some uncanny affinity towards necromancy and the black arts. She’s the crudest as far as language goes, and a lot of her story in the first two volumes definitely gets more fleshed out (heh, “fleshed out” hehe…I’m immature) than the others. Not saying that the other three don’t get their limelight–they actually do!

But still. Hannah killed me every time.

Also, I totally ship those two. But I mean…Sawyer is kind of delish, not gonna lie.

This booze-soaked second volume of RAT QUEENS reveals a growing menace within the very walls of Palisade. And while Dee may have run from her past, the bloated, blood-feasting sky god N’rygoth never really lets his children stray too far.

But anyway, the first volume really just lays in the groundwork of the series. The Rat Queens are a sordid lot, and for the most part chaos ensues when they’re around. This makes them an unwelcome presence in the kingdom of Palisade, a thorn on the mayor’s side, and a headache to Sawyer, captain of the guard and former assassin. In the end, though, they eventually save the day, gain the town’s praise, and host a super psychedelic party! 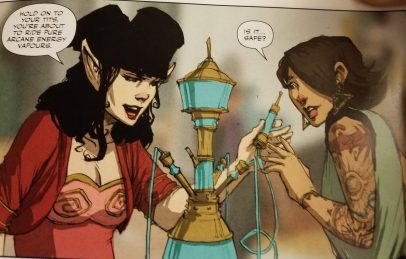 Seriously, though, my review can’t really do justice with these first two volumes. I’d just urge anyone who likes fantasy and fierce females to read it and experience the series for themselves.

Have you read this series? What did you think?

3 thoughts on “Sass and Sword and Sorcery || Rat Queens Review”