I’ve been a big Greek mythology fan when I was a wee lass, and this book definitely had me smiling all over again as I reminisce the tales of gods and heroes. One of my favorite tales from Greek myth was definitely the Odyssey, and one of the parts I loved of the Odyssey dealt with Circe. So this was up my alley. 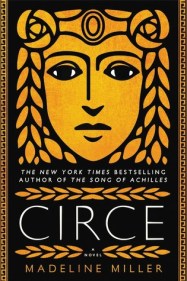 In the house of Helios, god of the sun and mightiest of the Titans, a daughter is born. But Circe is a strange child—not powerful, like her father, nor viciously alluring like her mother. Turning to the world of mortals for companionship, she discovers that she does possess power—the power of witchcraft, which can transform rivals into monsters and menace the gods themselves.

Threatened, Zeus banishes her to a deserted island, where she hones her occult craft, tames wild beasts and crosses paths with many of the most famous figures in all of mythology, including the Minotaur, Daedalus and his doomed son Icarus, the murderous Medea, and, of course, wily Odysseus.

But there is danger, too, for a woman who stands alone, and Circe unwittingly draws the wrath of both men and gods, ultimately finding herself pitted against one of the most terrifying and vengeful of the Olympians. To protect what she loves most, Circe must summon all her strength and choose, once and for all, whether she belongs with the gods she is born from, or the mortals she has come to love.

One of my favorite art pieces inspired by The Odyssey was definitely a picture of Circe. She’s encircled by her animals, her topless posture a confident yet alluring figure. Of course, if you took her up on the offer of room and board in her island, you were very much kept as part of her zoo, and most likely slaughtered afterward for a number of reasons.

I read this book with prior knowledge to Greek mythology, so it was seriously a great pleasure to revisit characters I hadn’t read about in years. I’ve always been a big fan of The Odyssey, and it was an adventure story I absolutely loved, because as a child, Odysseus was the Greek hero I compared all other heroes to. He was the cunning soldier, the strategist, the warrior, the family man. He was far from perfect, and it’s his flaws that bring his downfall, but all the same, my standards for Greek heroes was pretty high, and not even Kevin SorboHercules held a candle.

Odysseus, son of Laertes, the great traveller, prince of wiles and tricks and a thousand ways. He showed me his scars, and in return he let me pretend that I had none.

So it’s no surprise that Circe’s story is one I was familiar with, as far as Odysseus was involved. I knew Odysseus was eventually going to make his way back to the clever wife he left behind, but his sojourn at Aeaea was one of my favorite parts of his story. That’s where Circe was, and boy, does she play a part in the hero’s journey (gift from the goddess anyone?). Also, not biased or anything, but the best conversations totally happened between Odysseus and Circe (and then Circe and Daedalus). 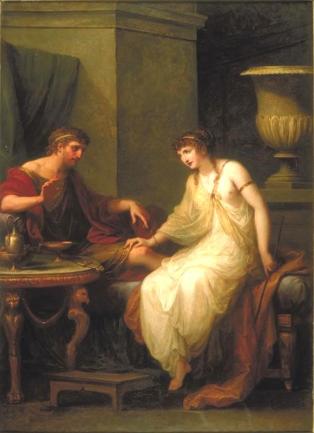 I really loved how Miller took Circe and gave her a story. While I was already familiar with Circe’s myth where Odysseus was concerned, I honestly hadn’t delved far enough in her background to tie other characters and stories into her narrative. The whole deal with Scylla was absolutely fascinating to read, and Miller breathes life into the mythos behind other heroes and adventures. Daedalus, for example, makes an appearance, and I absolutely loved this take on the grand craftsman.

There were other characters that showed up, and obviously the characterization for each is the subject of much debate, but Miller does a lovely job playing with their motivations and giving them personality. At times I even thought that the secondary characters had more personality than Circe, which might have been a bad thing to think, but oh well.

Because Circe was written in first person, it was way too easy to see things in the demigoddess’s eyes, and on occasion, this was very difficult to get through, especially since I listened to the audiobook. The rape scene–which pretty much became the turning point of Circe’s outlook on men and humanity–was disturbing at best, harrowing at worst. I literally had to stop listening to the audiobook for days before I could go back to her sweet, sweet vengeance. It was just…ugh, be forewarned.

4 out of 5 cookies! Overall, I really enjoyed this book, and I’ve actually put The Song of Achilles on my list of things to read at a later date. 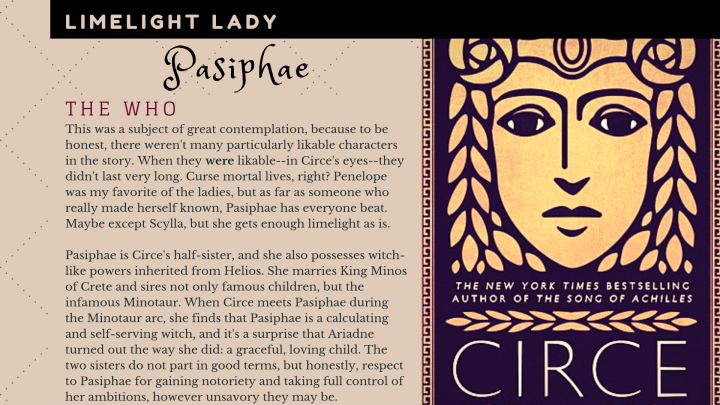