I don’t know what it is I’m doing wrong lately, but I’ve been feeling like the movie adaptations to the past books I’ve picked up got their messages across a but better. It’s no different for Dumplin’.

Self-proclaimed fat girl Willowdean Dickson (dubbed “Dumplin’” by her former beauty queen mom) has always been at home in her own skin. Her thoughts on having the ultimate bikini body? Put a bikini on your body. With her all-American beauty best friend, Ellen, by her side, things have always worked…until Will takes a job at Harpy’s, the local fast-food joint. There she meets Private School Bo, a hot former jock. Will isn’t surprised to find herself attracted to Bo. But she is surprised when he seems to like her back.

Instead of finding new heights of self-assurance in her relationship with Bo, Will starts to doubt herself. So she sets out to take back her confidence by doing the most horrifying thing she can imagine: entering the Miss Clover City beauty pageant—along with several other unlikely candidates—to show the world that she deserves to be up there as much as any twiggy girl does. Along the way, she’ll shock the hell out of Clover City—and maybe herself most of all.

Between the novel and the movie? The movie delivered on my expectations. The novel itself probably delivered on the young adult romance expectation, which was everything I’ve been trying to avoid.

I think one of the biggest differences between the book and the movie was how the issue of body image played out in the story. The novel itself follows Willowdean and the drama happening in her life. This includes problems with her best friend since forever, Ellen, to her love life, to the pageant she eventually enters as a “middle finger to the world.” The problems continue to escalate, too, but the driving message by the end of it was the mentality to accept and love the person you are, regardless of your shape or size.

It’s a really nice message, and I applaud Murphy for it.

So I’m a little taken aback by how secondary the Bluebonnet pageant was in the book. I mean, it’s the main reason for a lot of how the characters interact and where they develop, but at the end of the day, a lot of Willowdean’s development did not owe itself to her immersion in the pageant.

The movie, on the other hand, streamlines all the drama and focuses on one major plot point, putting everything else as secondary. In this case, the pageant is the thing.

And I loved how it played out, and the message is loud and clear.

That said, the book was good in its own way. I will admit a lot of the things I disliked about the book had to do with the love triangle (which doesn’t show up at all in the movie, thank goodness!). Willowdean also spends a whole lot of time in the novel whingeing about the fact that Ellen hates her. Which, frankly, was mostly Willowdean’s fault for not even trying to understand Ellen’s point of view. It mostly got on my nerves that Ellen didn’t even try to keep her frenemies like Callie from fat-shaming Willowdean–yes, your friendship was a bit rocky, but that’s YEARS of friendship, and it had to count for something, like, oh, having your friend BACK OFF.

The novel also has a love triangle, which, on a normal basis, drives me absolutely bonkers. A lot of the love triangle wouldn’t have been a triangle if Willowdean didn’t STRING poor Mitch along! The guy was great, but she went about and kept him hanging while she pined for Bo, who she broke up with because for SOME reason, she didn’t think she was the type of girl he’d like (but, I mean, WHY are you dictating who Bo wants to date when it’s clearly he genuinely LIKED you?! GET IT TOGETHER WILLOWDEAN).

Not to say I hated everything in the book. Again, I thought the secondary characters–especially Hannah—were fleshed out. I really loved the conversation between the girls during the sleepover scene, and I did like the relationship the mom had with Willowdean. It wasn’t as tear-worthy good as the one in the movie, but it was still fabulous.

3 out of 5 cookies! It was a good book, I just…liked the movie better? 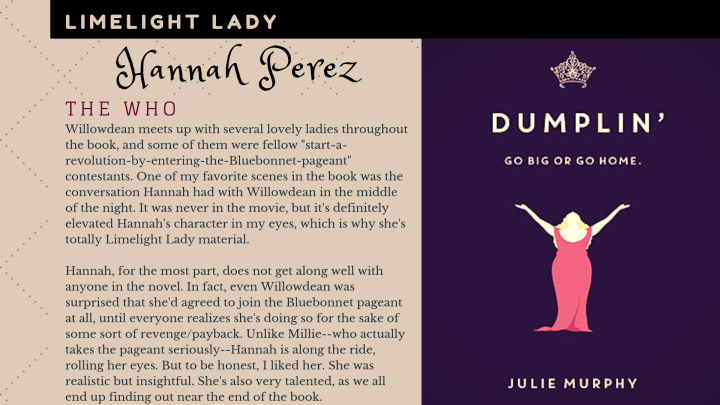