You know what, as problematic as some things were for me in this book, I thoroughly enjoyed it. But the bias comes from what made me love Warcross in the first place, which was HOLY HELL I WANT THIS VIRTUAL IMMERSION NOW. I mean…the book’s plot has no perfect solution to the major problem that came up in Warcross, but still. It was entertaining to read.

Also. I ship R+T real hard, you guys. They were adorable. 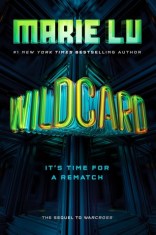 Emika Chen barely made it out of the Warcross Championships alive. Now that she knows the truth behind Hideo’s new NeuroLink algorithm, she can no longer trust the one person she’s always looked up to, who she once thought was on her side.

Determined to put a stop to Hideo’s grim plans, Emika and the Phoenix Riders band together, only to find a new threat lurking on the neon-lit streets of Tokyo. Someone’s put a bounty on Emika’s head, and her sole chance for survival lies with Zero and the Blackcoats, his ruthless crew. But Emika soon learns that Zero isn’t all that he seems—and his protection comes at a price.

Caught in a web of betrayal, with the future of free will at risk, just how far will Emika go to take down the man she loves?

I went into this book girding my loins because either I was going to read it and hate how things end, or continue to fangirl because I enjoyed the first book. And despite the problems that show up in both books, and my misgivings about the whole Zero problem, I actually kind of liked this book as well.

I could attribute this to my wanting to get back into the YA reading zone, after having read so many non-YA books lately. Even the YA tropes didn’t bother me as much as I thought they would.

In any case, I went into reading Wildcard and I had several Ghost in the Shell meets Ergo Proxy moments halfway through, and I absolutely adored that kind of feel, as far as the science fiction went.

The book itself did go a little slow, which is ironic because the first two chapters quite literally dealt with someone trying to assassinate Emika for the crazy stunts she’d pulled in the previous book. Lots of shots fired in the streets of Japan, a silver-haired assassin/mercenary comes to the rescue, and we finally get an encounter with Zero in the flesh. Sort of. But I won’t get into that too much.

I really liked Emika in Warcross, though Wildcard had me on the fence with her from time to time. Warcross painted her out to be this pretty cool bounty hunter who kind of knows how to navigate the inner workings of the virtual reality world. I mean, she delves into the Dark World often just to get the unsavory bad guys for a nifty fee. She’s seen shit, including the assassination roster. The Dark World is where most of the criminals go to party, right?

So why does she act like a child at times?

…the walls are covered with glowing screens featuring the services of beautiful girls and handsome, spiky-haired boys, along with shadier banners I don’t want to understand.

There’s the question of morality somewhere in the mix, and maybe it’s because I’ve read too much Schwab and Bardugo, but I didn’t have as much problem with Hideo as I thought I should. The guy’s a major tool, let’s be honest, but he did sorta kinda remind me of all the other baddies with anger issues and deeper, not-so-menacing goals.

I refuse to believe that he’s nothing more than a monster. I can’t watch him sink like this. I keep going because I need to find that boy again, the beating heart buried underneath his lie. I have to stop him in order to save him.

He was once the hand that pulled me up. Now I have to be his.

Cheesy as that sounds, I actually liked it. Doesn’t exactly excuse him for his mind control shtick–and the fact that he does break bad much later in the book–but I’m with Emika on this one. I feel like the guy really is still redeemable. (That being said, I’m not quite sure how I felt about the end, to be honest. I mean…I’m sorta kinda happy, but it was a little anticlimatic?)

Characters aside, I totally loved getting to know the Phoenix Riders a bit. I loved that scene where we got glimpses of memory from each of Emika’s team. I loved the interaction between Tremaine and Roshan (like, can these two get any cuter?!).

4 out of 5 cookies! Anyway, as I said, I did enjoy the book. It could have used a lot more Warcross playing, though, but hey, there’s the first book for that, right?

Girls night wasn't girls night without sushi, bubble tea, brownies, mochi donuts, cupcakes, onigiri, peach soju, the occasional "gate crashers" who dropped off presents and checked up on us, aaaand a rewatch of Bridgerton. Yeah, I'd say it was fun.
THANKS @jessperezosa (whose crochet stuff is found at @madeinjesst )FOR THE CUTEST KORO-SENSEI THINGS EVER. I'll take a pic of the clock too, but yes. Happy belated secret santa! #assassinationclassroom #korosensei #anime #crochetlove