Give me a moment while I still come to terms with what just happened in this book. Because holy zombies and witches and fae Batman! 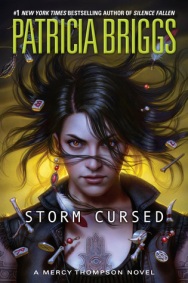 My name is Mercedes Athena Thompson Hauptman, and I am a car mechanic.

And a coyote shapeshifter.

And the mate of the Alpha of the Columbia Basin werewolf pack.

Even so, none of that would have gotten me into trouble if, a few months ago, I hadn’t stood upon a bridge and taken responsibility for the safety of the citizens who lived in our territory. It seemed like the thing to do at the time. It should have only involved hunting down killer goblins, zombie goats, and an occasional troll. Instead, our home was viewed as neutral ground, a place where humans would feel safe to come and treat with the fae.

The reality is that nothing and no one is safe. As generals and politicians face off with the Gray Lords of the fae, a storm is coming and her name is Death.

But we are pack, and we have given our word.

We will die to keep it.

I’ve been trying to go back and forth about how much I love this book and how much of it made me sad that Briggs took characters and plots to a certain direction. At the end of the day I still love this book and this series, and it had everything I wanted in a Mercy Thompson book, kitchen sink included. I still firmly believe that despite Briggs’ constant reminders of what Mercy can and can’t do (I mean, if you’ve read her later books one year apart at a time, you’d need a brief rehash of things, too…), the story flowed, and she gets better and better in her writing.

Most of all, though, I loved this book because it greatly involved witches.

One by one, two by two
the Hardesty witches
are traveling through.
With a storm of curses,
they call from their tomes;
they will drink your blood
and dine on your bones.

When I read this book, I’d already read all of the books in the Mercyverse that’s been out so far, including the Alpha & Omega series. So I did expect the strange happenings regarding witches and the witchborn in Charles and Anna’s story was a lead-up to what would happen in Storm Cursed. Mostly it was, though it was a little disappointing to only get this connection in passing, and, say, no-one actually bothered to call Charles. (Though I suppose there is the fact that the Columbia Basin pack is completely severed from all other pack ties within the country…which is an okay excuse, but not entirely good enough when it comes to something of this magnitude…but to each her own.)

I did enjoy the pacing, despite a lot of it meandering over mundane activities. Chasing zombie goats and zombie cows were both the highlight of the beginning pages and the lull of the later pages. I liked the continuation of the human-fae problem, though I’m not sure things truly ended the way they did. I’m sure more of the pot will be stirred in future volumes. I loved more insight into Wulfe’s background, it’s always a pleasure to see how else this already-scary vampire could be more frightening (also, the fact that Wulfe knew a bit about the Marrok’s dealings with witches in the past made his narration even BETTER). I’m still ambivalent over Stefan himself, but my partiality to him comes and goes depending on what he did or didn’t do in a novel.

There were a lot of characters that got sidelined, though, and I was a little bummed we didn’t see much of Ben and Warren this time around. Mary Jo was an opening scene, Aurielle was mentioned in passing, and Honey not at all. Even Darryl got sidelined as the second-in-command, and I’m just…I love the pack, and there wasn’t enough of them in this book.

That being said, the introduction of Sherwood Post was great, and the whole deal with the witchborn still remains to be fascinating. I love the fact that there was character conflict with how Adam felt towards a character versus what should be done with it. I love the fact that Zee and Tad had larger roles to play. And yes, I also cannot reconcile the look of Larry the Goblin King with that of David Bowie.

There was also a lot of disturbing imagery here with how the black witches treated their victims. It was very easy to hate the Hardesty witches, but again, made it even more difficult to accept the fact that all black witches truly are bad. It’s a little sad that this is the case, and that ending was truly the most bittersweet I’ve read in a while as far as Mercy Thompson books go. All the same, I’m coming to grips with it, and honestly, with how things went down at the final scene, I didn’t think it could have gone down any other way.

Below are just random book comments I’d yelled at my friend as I read this book. I should semi-buddy-read more often, lol.

*SPOILERS READ AT YOUR OWN RISK*

I realized it’s been 5 years since I’ve updated the Mercyverse reading guide I’d posted a while back. So I’ve edited it! For those interested in figuring out general timelines of events in the Mercyverse (including short stories and the Alpha & Omega series, I’ve compiled a list in a previous post). 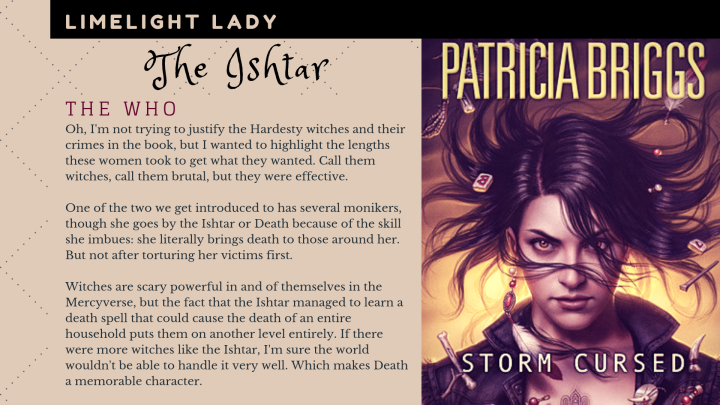 2 thoughts on “Death in the Forecast || Storm Cursed Review”