Oh boy, between getting sick, flying out of the state, and catching up with a week’s worth of work, who knew when I was going to start regularly getting back onto the social media bandwagon again? I do miss my blog…

So I guess it was very appropriate that this week’s Top Ten Tuesday talks about following fictional characters in social media. I definitely would have a list, provided these characters are part of social media (and honestly, some of them are, fiction-wise…) 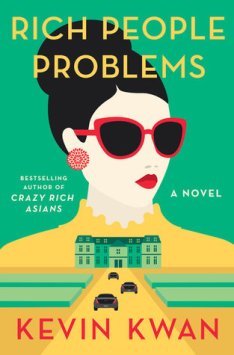 Cath Avery (Fangirl by Rainbow Rowell) – I’d read all her Snowbaz fanfiction. ALL OF THEM. She’s someone I’d follow on social media just so I can be updated with the newest chapter of her next fic.

Danielle Wittimer (Geekerella by Ashley Poston) – In the world of Geekerella, Elle is definitely a social media queen. Her blogs have exploded given the fictional Starfield’s popularity, and she’s someone whose opinion I’d read through when it comes to science fiction.

Kitty Pong (Rich People Problems by Kevin Kwan) – I totally see Kitty Pong on Instagram or Snapchat, bragging about the places she’s been on her private jet, as well as her recent acquisitions in the fashion, jewelry, real estate world and whathaveyou. Yeah, I’d totally live vicariously through her. (Plus, who wouldn’t want to see how the other side lives?)

Cassidy Blake (Tunnel of Bones by Victoria Schwab) – If Cassidy ever decides to start a blog page of her exploits as the daughter of the Inspecters, I’d totally follow that. Especially since she’ll be taking pictures of locations I’d love to travel to (I mean…Paris? Edinburgh? Swooon).

Hideo Tanaka (Warcross by Marie Lu) – Let’s be honest here, Hideo has no time to be dealing with social media when he probably has an entire PR department for that. Still, I can see him occasionally quipping excitedly on Twitter about updates to Warcross or what he’s working on at the moment (that isn’t his secret agenda, of course). That said, I’d probably be one of the fangirls who’d follow his Instagram in the hopes that he’ll post a short vlog about current events.

Zuzana (Dreams of Gods and Monsters by Laini Taylor) – One of the best POVs in the entire Daughter of Smoke and Bone series is definitely Zuzana’s. She’d definitely spin an entire Tumblr page on the angels and demons that start becoming more visible as the series go on. Plus, she’s an artist. I’d totally follow her for her marionette work.

Art3mis (Ready Player One by Ernest Cline) – If Art3mis had a blog post, it’d definitely be something gaming-related, and I dig that. I’d follow her because she’s a brilliant gamer in the Ready Player One universe and would probably have decent insight into the video games of today.

Carswell Thorne/Cress (Winter by Marissa Meyer) – Let’s be clear here. Cress would definitely be above setting up “The Thorne Archives,” a Tumblr blog of Thorne’s misadventures around Earth and space beyond. This would be a Cress-run blog, but most likely we’ll see a ton of pictures of Thorne being…well, Thorne.

Zoe (The Shambling Guide to New York City by Mur Lafferty) – I do remember liking this book for its in-depth look of a New York City filled with monsters. I haven’t read the other books, but I’d definitely follow Zoe because I imagine her blog would be that of a travel writer’s blog, and I love looking through some of those.

Aurora Deveaux (The Name of the Star by Maureen Johnson) – Before I’d gone to London, I’d read The Name of the Star. And boy, Rory’s voice is someone I’d definitely be interested in following if she posted randomly on Twitter. I’d live vicariously through Rory, no lie.

Anyway, do you have any characters you’d follow on social media hands down?