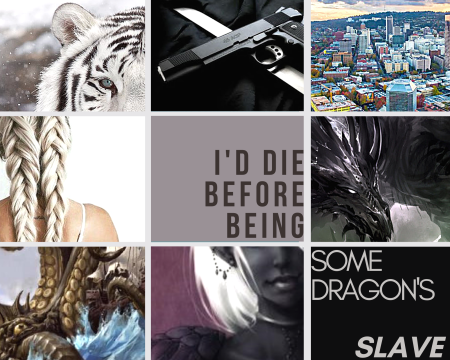 This. This has potential. I’m loving Val and her wonderful snark. I’m loving Sindari her spirit tiger animal thing. I’m loving the urban fantasy feel and whyyyy haven’t I gotten back on THAT bandwagon, I wonder? 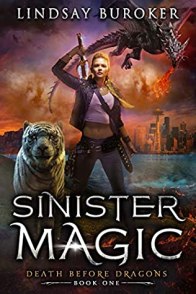 When magical bad guys hurt people, I take care of them. Permanently.

This doesn’t make me popular with the rest of the magical community—as you can tell from the numerous break-ins and assassination attempts I’ve endured over the years. But thanks to my half-elven blood, a powerful sword named Chopper, and a telepathic tiger with an attitude, I’ve always been able to handle my problems with aplomb. Maybe some cursing and swearing, too, but definitely aplomb.

That changes when my boss is afflicted with a mysterious disease, a government agent starts investigating me, and a godforsaken dragon shows up in the middle of my latest job.

I’ve taken down vampires, zombies, and ogres, but dragons are way, way more powerful. And it doesn’t look like this one is going to like me.

Worse than that, he wants to use his magic to compel me to do his bidding, as if I’m some weak-minded minion.

That’s not going to happen. I’d die before being some dragon’s slave.

But if I can’t figure out a way to avoid him, save my boss, and get rid of the government spook, I’m screwed. Or dead. Or screwed and dead. And that’s never comfortable.

I haven’t been back to the urban fantasy world in a while, but I do appreciate a good romp in the supernatural northwestern United States! (This is coming from a big fan of the Mercy Thompson series, soooo I already had high expectations…)

What I like about much of the urban fantasy I’ve read is that the main character tends to be a wise-cracking Jane (or Joe in the case of the Iron Druid Chronicles and the Dresden Files). Val Thorvald is no different in that respect; she’s a snarky monster hunter with an equally snarky sidekick. What I liked about her is that she’s an older female with an already-established ex-family and a career that she’s been sustaining for probably decades at this point.

Heights don’t usually faze me. What gets me is the thought of falling from them, landing on sharp pointy rocks, being pulverized like flank steak in a meat grinder, and then being sucked out to sea, never to be seen again.

Many of the urban fantasy books I’ve read tend to focus on heroines around my age, which is GREAT, but I do like the fact that Val is an older woman (not THAT much older, mind you) who’s got more problems than just killing the next wyvern or two. She’s got stress issues, needs to see a shrink from time to time, and has problems sustaining relationships. She also has some form of asthma/breathing problem, and seriously, she’s still taking names and kicking ass despite all of that. I can probably keep on going about Val, but let me get to the actual meat of the story, yes?

Sinister Magic starts off pretty well, introducing the supernatural, preternatural, and natural inhabitants around Oregon. Somehow, this set of magical creatures are mostly out in the open to those who care to believe, though from what I gathered, not everyone believes, and thus are unaware of the magical? That was a little confusing, since even the online world is at least aware of ONE vampire if not many more…but I’m guessing more on that will be unraveled in further books.

Whatever the case may be, Val is a monster hunter charged with ridding the world of the monsters that endanger and harm humans. She is very good at her job, and with the help of her spirit tiger sidekick Sindari (who I ABSOLUTELY ADORE) and her weapons Chopper and Fezzik, she’s even garnered several nicknames (like “Ruin Bringer”) to strike fear in the hearts of many of the supernaturals.

But then in swoops a condescending, shapeshifting dragon and Val’s entire livelihood is threatened. Mostly by the dragon, but half of it is probably because her boss is in danger and somebody’s trying to ruin her reputation–and kill her on top of that. So of course it’s only natural that Val and Zav–the black dragon enforcer from the Dragon Justice Court–get off on the wrong foot. Er, wing?

Honestly, that made for some wonderful back-and-forth between them whenever the two clashed. I’m hoping for more of that in the future–if the electricity was any subtle indication (which, honestly, it totally wasn’t)–which I’ll most likely see. Zav’s a little too haughty for my taste, but he grew on me near the end.

“So much better. Thank you for this gracious offer. I’ll definitely think about it, probably while I’m throwing axes at a picture of a black dragon stapled to a wall.”

He looked back over his shoulder, those glowing violet eyes gleaming out of the darkness. I will have a picture of myself delivered to your domicile so that you needn’t use anything inferior for the purpose.

My dude, you better deliver.

As for the plot, there were a lot of unnecessary things going on. I mean, I love the idea of Nin and the weird supernatural refuge in the outskirts of Seattle, but there really wasn’t much of a point to most of what happened around them. I did feel that the only purpose the whole werewolf and golem scene was for the dragon to continue trolling Val (and perhaps to introduce Dimitri, who kind of plays a role in the story). It was all, “I’m sorry, but the princess is in another castle!” kind of situation, which could have been combined with the vampire scene.

That being said, I did enjoy the whirlwind story. The pacing wasn’t bad, the dialogue was my favorite, and Sindari is definitely Fierce with a capital F. Maybe that’s because I’m biased to feline helpers, but there it is.

3.5 out of 5 cookies! I’d read the second book. It might take a while because I’m horrible at series, but I’d definitely read it.