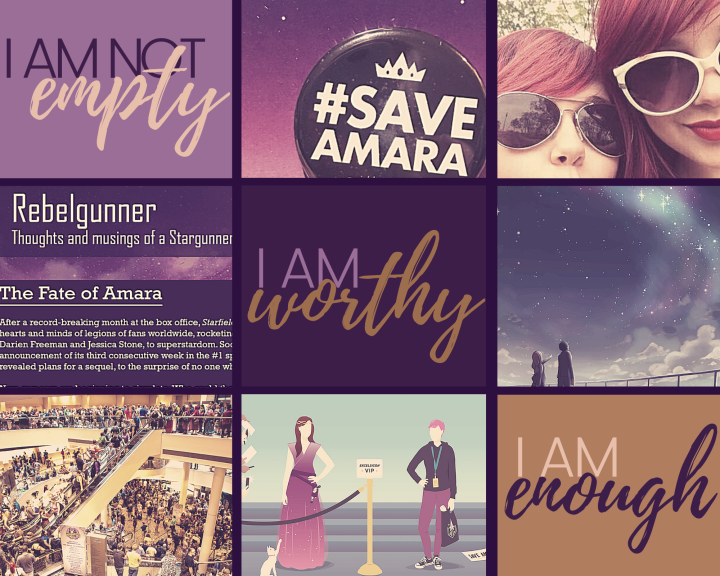 I’m once again left in a puddle of feels after a book from this series, and it’s only the second book! This was basically unputdownable, but it took me AGES to finish only because I never wanted the con to end. I miss the con magic at this rate, and while Poston also highlights the negatives of fandom itself, I love her realistic depictions of it. And the nerdy nerdy things she says. The bunch of nerd inside me cries with joy.

So here I am once again. Looking to the stars for the next book!

THE PRINCESS AND THE FANGIRL

Imogen Lovelace is an ordinary fangirl on an impossible mission: save her favorite character, Princess Amara, from being killed off from her favorite franchise, Starfield. The problem is, Jessica Stone—the actress who plays Princess Amara—wants nothing more than to leave the intense scrutiny of the fandom behind. If this year’s ExcelsiCon isn’t her last, she’ll consider her career derailed.

When a case of mistaken identity throws look-a-likes Imogen and Jess together, they quickly become enemies. But when the script for the Starfield sequel leaks, and all signs point to Jess, she and Imogen must trade places to find the person responsible. That’s easier said than done when the girls step into each other’s shoes and discover new romantic possibilities, as well as the other side of intense fandom. As these “princesses” race to find the script-leaker, they must rescue themselves from their own expectations, and redefine what it means to live happily ever after.

So I’ve been holding onto an ARC of this book since forever, both through Netgalley and through something I signed up for at NYCC. Obviously I’m way behind on having reviewed this book, but I’m not sorry that I read it eventually, even with all the ARC’s imperfections.

First of all, this book can be considered a stand-alone, though I wholeheartedly recommend reading Geekerella first anyway, because it gives you a background of how the other characters truly are. I mean, Darien and Elle make their cameos in The Princess and the Fangirl, and their cameos are all the more satisfying to read knowing their back stories.

TPatF, however, takes a different look at fandom itself, in both the eyes of a celebrity like Jessica Stone, and the eyes of a fan who would do quite a lot to save her fandom. It takes a look at the ugly side of how fandom works; how actors are under the pressure to meet fan expectations, and what happens when one’s goals and dreams are not quite the same as what the fans want. The book also takes a look at harassment at cons, as well as the trolls of the internet age, which I thought brought a realistic depiction of the negatives to any fandom, popularized or otherwise.

And I appreciate that Poston adds all of this, because fandom isn’t exactly all happy-go-lucky (though, tbh, why shouldn’t it be at the end of the day?!). There are people who take fandom one step further than normal, and that kind of ruins the view of fandom for many. Which is what Jessica Stone is seeing throughout the book, which makes it sad.

BUT. Ashley Poston isn’t wrong on that count. Without adding those negatives, how do we really appreciate fandom itself despite the trolls and the haters?

Well, she wrote it right here.

But let me get to what I really loved about this book, and that’s the characters. Particularly Imogen effing Lovelace.

Imogen is a huge, huge Starfield fan. When the rebooted movie of Starfield–starring Darien Freeman as Carmindor and Jessica Stone as Amara–ends up with Amara’s character essentially dying, there is a clamor within the fandom community to bring Amara back to life. At the center of it all is Imogen, who creates the #SaveAmara movement that gets a pretty decent following within the Starfield community. When Jessica Stone makes a deal and switches identities with her (for reasons Imogen doesn’t know entirely), Imogen finds that she can push forth her initiative through a new platform.

It does not work out the way she really wants it to, but when do crazy schemes usually do in books?

Still, I love Imogen to bits. I love her character development–which she gets a lot of because of her experience posing as Jessica Stone. I love her inner monologues and constant reference to pop culture. I love that she continues to have an idealized version of love up until she actually does fall in love. But mostly I just love Imogen.

I always had it in my head that love was kinda like two people passing each other on opposite escalators at the front of the convention hall as you hurry to your next panel, he dressed as Link and you as Zelda…

Because I swear, every other Imogen-ish saying made me laugh throughout her POV. Also, it doesn’t hurt that her meet cute is with a boy she accidentally spills coffee on, and the rest is history kind of thing. (Though in this particular case, the romance is slightly more muted when you don’t really get the other side’s POV as much as we got Dare’s side in Geekerella. That’s just me, though.)

The human is tall and angular, like a lot of the J-Pop singers Bran likes, with thick dark hair and black-rimmed glasses and…oh.

He is very very hot. Hot like Iwanttobestuckinanelevatorwithyou-hot, not wearenowmortalenemiesbecauseIjustspilledmycoffeeonyouwhilenotpayingattention hot.

But once again, I think Poston really catered to the fangirl in everyone by writing this book, and the ensuing books that’s going to come out from her Once Upon a Con series. I think I could continually read whatever she comes up with because it does make my inner nerd squee when there are homages to fandoms that goes beyond the science fiction.A lot of the references are geek-centered pop culture, sure, but you’d have to really look and see if you can catch all the references, because that’s probably my favorite part of Excelsicon in its entirety. It’s catching them all that’s the best part.

So did I love this more than Geekerella? Not gonna lie, I didn’t? But that’s not saying much, because while I absolutely ship-stan-will-go-down-with-Darielle-in-a-storm, I am so very entranced with The Princess and the Fangirl as well.

5 out of 5 cookies! And I cannot wait to read the Beauty and the Beast-inspired retelling that Poston came up with next (even though the dude character in Bookish and the Beast is pretty much a major jerk in TPatF).